It's a typical dilemma.  Should you spend money on an energy system that you may not pay off before selling your property?  Or something cosmetic that will boost the resale value?  Tompkins County and the City of Ithaca have signed on to a program that makes it more economical to go green without being saddled with loan repayment when you sell.  The concept is Property Assessed Clean Energy (PACE).  New York's PACE Program is administered by Energize NY.

"In our community where there are so many transient people cycling through, they could do the upgrade on their house and then pay for it while they're there and enjoying the benefits, but the cost of that upgrade would stay with the house for the new owner to get the benefit as well," says Tompkins County Department Of Planning And Sustainability Deputy Commissioner Of Planning Katherine Borgella.  "It's an idea that caught on nationally. Tompkins County was the first to join north of Ulster.  The City of Ithaca joined shortly after that."

The program offers up to 20 year financing at reasonable rates of about 4% or 6 1/2%.  But Borgella says she thinks it's the 20 years piece that make people look seriously at this financing.  That and the fact that the loan stays with the property even if you sell it.  Once approved, loan payments become part of your annual tax bill, so if you do sell the property the next owner sees the repayment on his or her tax bill.

Except for one community in southern New York State, residential PACE programs have hit road blocks.  While a lot of communities across New York were excited about the potential of Residential PACE, the nature of liens and home mortgages made lenders nervous.

"Then the Federal housing Authority got involved and said if you hold a Fannie Mae or Freddie Mac mortgage on your property you can't participate in this program.  So it kind of killed PACE Residential," Borgella says.  "The residential side has been in turmoil ever since. But in the interim people still thought this was a great mechanism to spur the energy transition.  So they started a lot of programs nationally with Commercial Pace."

Commercial PACE is available to Commercial and Industrial businesses and Multifamily and Small Commercially-Owned Residential businesses.  PACE for homeowners is still a dream, but local and Energize NY officials are hopeful that a residential component will become available.

"I do not expect it to be broadly available in NYS for at least a year," says Energize NY Executive Director Mark Thielking.

For now Tompkins County businesses can take advantage of Commercial PACE.  It can be applied to upgrades like better insulation or to the newest green technologies.  Borgella says that of 550 PACE projects in various stages of development state-wide, 25 are in Tompkins County.  Local officials hope the first of these will receive loan approval later this year.

"It could be energy efficiency or it could be renewable energy," Borgella explains.  "We're hoping that by the end of August we'll be able to announce our first project.  That one is a combination of air sealing and insulation and lighting upgrades.  It's not the sexy solar panels and all of that.  It's very basic but it should provide great energy savings and a long term reduction of their energy use and costs.  That helps the community and the business." 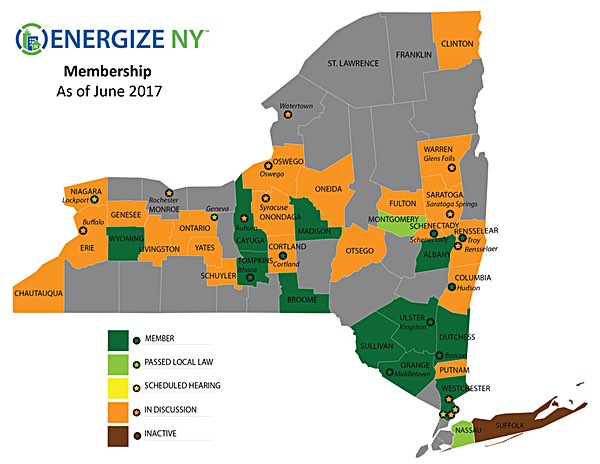 Tompkins County and the City of Ithaca were among the first communities to jump on board the PACE bandwagon. County officials are hopeful that the first successful PACE loan will be announced in August. Map by Energize NY™

County officials also brought Energize NY representatives to Tompkins County to meet with the County Legislature, City of Ithaca officials, economic development officials including the Chamber of Commerce and Tompkins County Area Development (TCAD).  They talked about how the program could work in Tompkins County and Ithaca, and discussed whether the local governments should join.

"I really didn't hear any negative ideas about it at all," Borgella says.  "People were really excited about it."

Business owners work directly with their contractor and the PACE-certified contractor connects them directly with an Energize New York commercial energy specialist who can walk them through the different NYSERDA programs or utility programs so they can maximize the incentives that are available to them.  Contractors have to attend an Energize NY training session in order to participate.  Energize NY conducted a session In Ithaca in February of 2016 that attracted contractors from around the state.  Borgella says that the incentive loan does not interfere with other available incentives, and that Energize NY representatives will often tell business owners about other opportunities they may not have been aware of.

While Residential PACE isn't dead yet, it has some obstacles to overcome.

"I thought for a while that it was going to be happening here, too, but I believe that they have to amend the enabling legislation to allow that to happen," Borgella says.  "I also recently heard that there are bills in the federal House of Representatives and Senate working their way through that could permanently end Residential PACE.  It's not looking like that's going to happen immediately, but I think there are significant hurdles in front of that."

Meanwhile she notes that there are a wealth of businesses in Ithaca and the surrounding county that may qualify for the loan.  Projects that are already being considered range from non-profits that own buildings to smaller for-profit businesses that own their own building.  Residences that have been turned into a commercial space, such as law firms and consulting businesses, are eligible for the financing.  Borgella says that the program could be an element that helps Tompkins County reach it's 'energy roadmap' goal of reducing carbon emissions in the County by 80% from 2008 levels by the year 2050.

"We need every incentive we can possibly offer to people to make this transition," she says.