With many developments sprouting up in Lansing, none is currently generating as much controversy now as the proposed Novalane development, located between communities on East Shore Circle and Eastlake.  About 30 neighbors say they they feel disenfranchised by the Town Planning Board and Town officials.  They say that safety and quality of life issues are being ignored for current residents.  Spokesman David Schutz, who lives on Reach Run, says that the group is not against the development, but want it done in a manner that insures the safety, especially of neighborhood children, and quality of life for East Shore Circle, Reach Run, Smuggler's path and Eastlake Road residents.  He says the neighborhood group is prepared to sue the Town if necessary, but would prefer to resolve their issues at the community level.

"This is resolvable at this level in a community," says Schutz says.  "If we can try to keep the sky from falling, and the sky's not falling on both parties, and just try to work this out together, there are going to have to be concessions.  But it's resolvable. it's absoulutely resolvable."

But miscommunication, rumors, and the perception that the neighbors are not being treated respectfully has caused them anxiety.  Schutz says he is in favor of new homes on the property, but the neighborhood group says that they fear a long-term solution to traffic and safety is being shunted aside in favor of a partial solution with no guarantee that it will ever be completed.  The main bone of contention is a proposed road that would extend Smuggler's Path through the new development and connect the Reach Run neighborhood with Eastlake Road.

While the complete plan could bring around 19 new houses to the area, a first phase will be to build up to seven houses on the western portion of the parcel.  The cost of constructing a road may be a sticking point.  Neighbors fear the Planning Board will approve phase one of the development with only a partial road that leads from Reach Run via Smuggler's path into the development without extending all the way to the Eastlake neighborhood.  They point out that both intersections between East Shore Circle and Route 34 are on curves, and are already dangerous.  They say that if the new road connected to Eastlake Road more people would access 34 there, where 34 is straight. 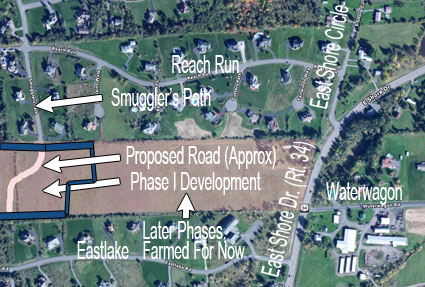 This map shows approximately where Novalane is located (the redish area), and the approximate location of the proposed road

The neighbors say their best case scenario would take the safety issue even further.  They say it would make more sense to extend the road eastward to create a four-way intersection where Waterwagon Rd. meets Route 34.  Their reasoning is that it leads out on a straight stretch of Route 34, and if a traffic light were installed it would create the safest possible situation.

"What often happens is the second phase doesn't get done, and over time you're stuck with an unsafe situation," says Guy DiCicco.  "This could be the time that we should ask the Town's leaders to look at this thing from a long term point of view.  If Novalane is going to the trouble to build one phase and leave the second phase for later I feel there ought to be a longer term solution.  I see a solution looking more like intersecting at Waterwagon.  They've reduced it to 45 miles per hour, so they could put a traffic light there.  Then you have a real intersection on a straight part of the highway, rather than trying to do it on a curve."

Karin Sternberg says that she called Elizabeth Parmsley in the highway permit department of the DOT.  She said Parmley had been approached about six weeks earlier by someone exploring connecting Novalane to Route 34, but there had been no followup.  The DOT had not denied the idea, and Sternberg says that it is still an option to allow construction vehicles direct access from Route 34.  When she brought the idea up to the Planning Board she was told it was denied seven or eight years ago.  She called Parmley again last week, and was told the implication is that it was the the Town, not the DOT, that didn't want the access opened to 34. 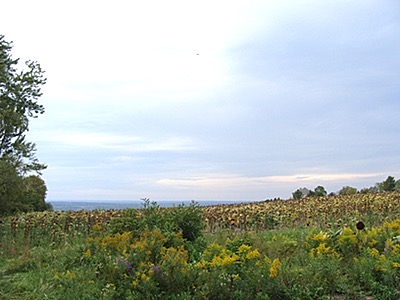 This is a view of the Novalane property looking west from the end of Waterwagon Road. neighbors would like to see a connecting road at this location that would create a four-way intersection with East Shore Drive (Route 34), perhaps with a traffic light.

The Planning Board has had many discussions about the fact that a connecting road between the East Shore Circle neighborhoods and the East Lake development has been planned for many years.  Some months ago Town Attorney Guy Krogh presented a series of historical maps showing the rights of way at various locations at different periods of time.  The presentation played out like a stand-up comedy routine as the right of way moved from location to location on various maps, with the exact location never really determined.  The one clear thread was that it has long been planned that a road will connect the two development areas.

The Planning Board has been considering the Novalane development for some time, and neighbors tried to make themselves heard.  But they say they were cut off disrespectfully, and left feeling that the Board was favoring developers over taxpaying residents.

"The way people were treated at this meeting -- we were dismissed," says Reach Run neighbor Bob Sternberg.  "It was disrespectful, and it was like 'get out of here'.  You have two minutes, time's up, get out.  We're large taxpayers.  It's an autocracy.  To be treated like that by our own representatives is incorrect and not acceptable.  Who are they working for?"

"Whether it is perceived or real, the Board is not now acting in the best interests of the community, which it's supposed to be serving here," Schutz says.  "It certainly appears as if they're working in the interests of some other party as opposed to the community they're supposed to be protecting.  That's our concern, which creates anxiety, and everybody gets upset about that.  It sure looks like their interests are with the developer, as opposed to the safety of this community.  That's really getting people pretty upset.  When we go to the board we're dismissed.  It doesn't feel good."

Schutz says that the neighbors are trying to manage the issue at the municipal level, but the group is prepared to take it to litigation.  He says some neighbors are frustrated enough to want to litigate now, but his preference is to work with town officials to get the neighbors' ideas and concerns addressed.

"In a good faith effort to try to manage this the way that we would expect as a community, we are trying to exhaust our alternatives before we go there," he says.  "But we're certainly prepared to go there."

Karin Sternberg says that ot all the documents can be found on the Town Web site.  But Lansing's Planning Consultant Michael Long says says the Town has reached out to the community.  He added that there have been four Planning Board meetings and at least four mailings to people who live within 600 feet of the property, and that the documents are available on the Web site.  He says the fate of the connecting road has yet to be determined, and that town officials are working with the developer to find a viable solution.

"There is a plan to build the road.  The problem is, when will it happen?" says Lansing Planning Consultant Michael Long.  "It's very hard to determine.  The developer did look at some cost analyses of paving the road going all the way through to Eastlake.  However, because of the storm water requirements it's extremely expensive.  We looked at another alternative to that plan, and that didn't get all the way through to completion.  Right now we're looking at another engineering solution that, hopefully, will make the cost less." 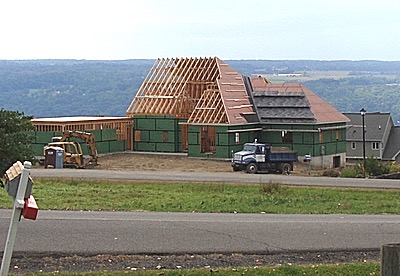 Reach Run residents complain that truck traffic associated with this one new house is disruptive at all hours of the day, and dangerous to children playing outside. They say construction vehicles for a six or seven house development would be much worse.

Reach Run is a quiet neighborhood where children play outside and parents walk or jog.  Residents worry about added traffic, including construction traffic.  They say that trucks associated with the development of one house in the neighborhood are disruptive and noisy.  They say that even if access to Novalane were opened only to construction traffic it would alleviate this issue.

"Our desired outcome is not for them not to develop it," says Karin Sternberg.  "It's just to develop it in a responsible way.  Safety, quality of life.  And it's not just about the children.  We all go walking here.  I go jogging.  I talked to a neighbor who was walking her dog.  She was pushed into the ditch by a speeding car.  If Smuggler's Path went through it would be beneficial for everybody.  We would take longer walks, the children could visit their friends, which they can't do now because nobody is allowing their children to go on 34."

Long says that seven houses will not add enough traffic to cause the kinds of safety issues that neighbors are worried about.

"Based on the information that we have currently, seven houses is going to generate probably 20 to 25 traffic visits per day during the peak time of day.  It's not a significant impact.  In the Ithaca-Tompkins County Transportation Council's analysis showed that section of East Shore Drive (Route 34) is currently at about 51% of capacity.  So it would take a lot more than seven houses to swing that into a critical increase."

But he adds that there is no hard data on the residential roads off of East Shore Drive.

"It's one thing to say there is a problem there, but I don't think anybody's ever done traffic counts," he says. "It's probably in the neighborhood of 25 to 30 properties.  It's not a significant amount of traffic.  It certainly doesn't exceed the capacities of those roads."

DiCicco asked for permission to sit in on a meeting with Parmley's supervisor when he comes to meet with town officials on a number of items, including a proposed traffic light at the Triphammer/Peruville Roads intersection.  He says he has not heard back from Town officials on whether he may attend.  Long said he would be meeting with the neighbors to give them more information.

"I'm always available to talk to anybody for just about any reason," he says.  "Hopefully when we go through the public process -- and the Planning Board has already considered a lot of the things t(the neighbors) asked questions about -- hopefully they will understand more about the project and it will make it easier for them to understand what's going on."