The new fire station on Oakcrest Road may be ready for use by the end of February if construction stays on schedule.  Fire Commissioner Alvin Parker reported Tuesday that apparatus bay interior walls and ceiling, a heating system have been installed.  Dry wall has been hung on framing, and is ready to be finished.  This week a sprinkler system is being installed, and compressed air lines needed to service fire equipment is close to completion.

The $750,000, 63,000 square foot building has four equipment bays to house a ladder truck, a fire engine and a duty-chief EMS vehicle, with the fourth bay available for future expansion. The station will also have five bunk rooms.  The new station replaces a smaller 1972 building that was too small for modern fire equipment and had deteriorated to the point where it might have been condemned. 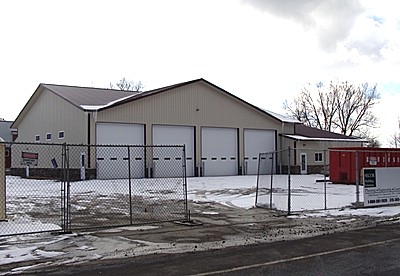 The expanded space and bunk rooms will mean faster response times for emergency calls in the Village of Lansing, which accounts for more than 50% of emergency calls to the Lansing Volunteer Fire Department.  The fire station is next to BJ's Wholesale Club, with a special emergency access road next to the station for fast response to emergencies at the mall.

This project came on the heels of an addition to Central Station on Ridge Road.  Chief Scott Purcell reports that five bunkers are living in the new facility there.  That project cost $2.3 million.  Both projects were paid for without additional cost to taxpayers.

But Fire Commissioners Darrel Rhoads and Tonya Reynolds reported that Station 4 in North Lansing needs major repairs.  They inspected the station and kept a notebook with a long list of needed repairs and pictures documenting them.  Rhoads said the kitchen is in the worst shape.  That facility is used as a polling place for elections and for many North Lansing Auxiliary dinners and events throughout the year.

"It's really bad in there," Rhoads said.  "Paint is falling off the walls, heaters covers are hanging on the floor, there are cracks in the floor..."

The Commissioners voted to allow Rhoads and Reynolds to contact an architect to do a walk through and begin to put together an estimate of the project scope and cost.  Fire Commissioner Chairman Robert Wagner says the project may be phased to fit into times that will not interfere with activities in the facility.