Lansing and Dryden residents came to the Freeville Fire Station Tuesday to learn about a proposed gas pipeline that would bring natural gas to customers from Freeville, along West Dryden and Farrell Roads to the Warren Road area of Lansing.  The pipe would span seven miles, mostly in Dryden, to enhance the gas delivery system that is near capacity for the Ithaca area.  New York State Electric & Gas (NYSEG) Public Affairs Manager Clayton Ellis says that the pipe will connect specific customers and enhance an existing system.

NYSEG is proposing about seven miles of a mid-pressure distribution pipeline, planned mainly for the south side of West Dryden Road, on the street side of the ditch.  Ellis says that the project could be completed quickly before the end of 2015.  NYSEG's schedule calls for the company to obtain easements from property owners starting in September and finishing next April.  That would be followed by procuring materials and finalizing engineering plans by May with construction taking place from May through October.  The pipeline would be commissioned by November.

The Dominion Transmission, Inc. (DTI) interstate pipeline covers 7,800 miles of natural gas transmission pipes in six states. The proposed project would hook up to the pipeline in Freeville, north for a short distance along NYS Route 38 along West Dryden and Farrell Roads to the Warren Road area of Lansing, totaling about seven miles of 10" steel pipe.

The four hour meeting was more of an open house, where people could visit various 'stations' around the room to learn about the different aspects of the project.  Ellis says that NYSEFG doesn't routinely hold such meetings for routine gas distribution project like this one.  But he said high interest by area developers and concerned property owners led the company to schedule it.  Reportedly Lucente Holdings and Village Solars LLC are two of the projects that would benefit from the gas line.

Tensions sparked as protesters refused to move a press conference away from the entrance to the building, after earlier surrounding the project manager to ask questions about the project.  But in general the exchange was respectful.

Ellis says the pipe will be beneficial to homeowners along the route because it will enable them to hook up, which is free for homes that are within 100 feet of the pipe.  A NYSEG handout shows that at current prices annual estimated residential energy costs are $1,061 for natural gas users compared to between  $2,725 and $2,897 for fuel oil, electricity and propane users. 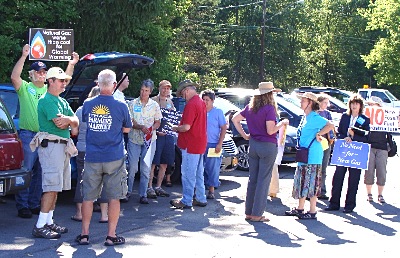 West Dryden Residents Against The Pipeline rallied outside the fire station, then came in to ask questions

Not all property owners agree.  About 20 people from a group calling itself 'West Dryden Residents Against The Pipeline' came to demand answers to their questions, and to protest the need for natural gas in the area.  Joanne Cipolla-Dennis, a key organizer, says that she has been attempting to get answers to about 35 questions she sent NYSEG in mid-December.  But even after talking to the project manager at Tuesday's meeting many remained unanswered.

"One of those questions was, this is a ten inch steel mid-pressure line at 124psi," she says.  "Given that, what is the blast zone?  He said that he didn't know the answer to that question.  So how are people supposed to understand that an explosion is safe for them and their homes?"

Ellis says that explosions are not typical.  He says when gas lines are breached the problem is containing escaping gas quickly.

"Most often you end up with blowing gas," he says.  "We have to be called in to shut the gas off safely.  We make repairs and then re-energize the system.  Sometimes the blowing gas catches fire and we have to address that part of the problem.  But typically there wouldn't be an explosion."

He adds that under normal operating conditions NYSEG's natural gas system is very safe.  He says most gas line breaches come from people digging into the pipes because they haven't checked beforehand to confirm they are not digging where underground facilities are located.

"Apart from promoting '811' which is a phone call people can make to have underground facilities marked to insure that they don't dig into them, we have an extensive safety program," Ellis says.  "We do leak surveys.  Keep in mind we have meter readers out in the field all the time and they certainly know what natural gas smells like.  We do a lot of things to insure that our system operates safely.  And it does operate safely.  It's a very safe system." 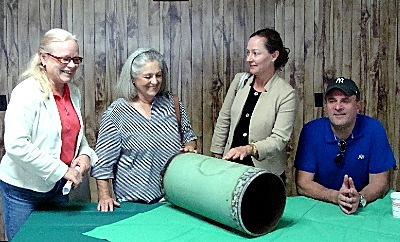 Town and County officials also attended the meeting.  Lansing Town Supervisor Kathy Miller  and Dryden Town Supervisor Mary Ann Sumner came to learn specifics of the project, and Tompkins County Area Development (TCAD) Vice President & Director of Economic Development Services Heather Filiberto and Lansing's representative to the Tompkins County Legislaturer Mike Sigler were also on hand.  Sigler says he wishes the pipe were planned for his own neighborhood because he would love to switch to natural gas.

"I'm thinking about installing solar panels," he says.  "It would cost $3,700 for an array to serve my electric needs.  But that won't serve my heating needs.  For that I need to deal with oil.  That's how it's going to be for the next 20 or 30 years, so if we don't switch to natural gas I don't know what the answer will be.  I would like to see more natural gas come to the area."

Cipolla-Dennis hopes to stop the project by convincing her neighbors not to sign easements.  She brought a handout of her own to advise home owners of how to protect their rights and properties, and included questions they should ask before agreeing to sign an easement.  She says she will not sign an easement and worries that NYSEG will resort to eminent domain to take her property from her.

"We believe that we could use eminent domain on this project, but that would be an absolute last resort just like it is on all of our gas and electric projects," Ellis says.  "We want to work with the property owners and get the easements we need to build the project."

Cipolla-Dennis adds that her insurance agent has told her that insurance companies are considering canceling homeowner's insurance for property owners who sign easements.  She says NYSEG is not responsible for costs associated with explosions, so home owners would be held responsible for problems, and complains the company has continued to deflect crucial questions, even at Tuesday's meeting.

"We have asked questions that are critical," she says.  "We need to make informed choices and we can't make those choices without critical questions being answered."

But local demand for natural gas service, especially in the area of Warren Road that has seen a minor renaissance in development since the Warren Road Sewer came on line, may push the project through.  Ellis says that natural gas, used primarily for heating, is clean, economical, and much less expensive right now than propane or other heating sources.  He says a lot of people want it.

"That area needs natural gas," Sigler adds.  "We have businesses coming in there.  That's one of the areas we've determined we want to see development in.  We're at capacity, so to get any more kind of development out there, that's where it needs to go.  If we are serious about creating jobs, and frankly if we're serious about things like global warming, natural gas right now is the way to go."