You might think that the major thrust of development in Lansing is the Town Center, which appears to be on hold, at least for now.  But the fact is that hundreds of new living units have been proposed within the township, and some of them are under construction.  The focused, high density development in a town center that some people hope will reduce random development sprawl is not happening in Lansing.  Quite the opposite, in fact, considering nearly 20 proposals currently on the drawing board are going to mean increased traffic, congestion and accidents on Lansing roadways, especially throughout the southern part of the township (not including the Village).

Three members of a Cornell Design Connect team presented their findings from a two and a half month assessment of Lansing transportation issues to the Lansing Comprehensive Plan Update Committee Tuesday.  The study concludes that significant growth in the largely non-rural southern portion of the township will result in increased congestion and accidents if they are not addressed.  It recommended upgrades to town roads, pathways, and bicycle paths as part of a move to mitigate growing congestion.

"There's been a lot of attention paid to what amounts to a building boom that's going on right now," said Project Leader Mike Castos.  "Between 15 to 18 recently proposed or recently approved developments the community is looking at several hundred new units of residential housing coming online within the next 10 or 20 years.  There could be a lot of effects that are difficult to predict on the community's transportation system.  Couple that with a series of high profile traffic accidents in places like Triphammer Road." 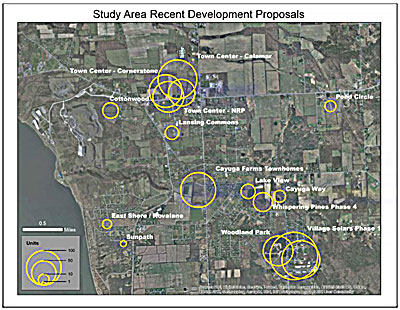 Recent discussions about traffic in the town have escalated as the Lansing Planning board has discussed new developments and a connector road in the Eastlake neighborhoods near East Shore Drive, as well as developments around Warren Road and other parts Lansing.  Eighteen developments have been proposed recently that could add hundreds of living units to the town within the next 10 to 20 years, representing an unprecedented building boom.  Lansing Planning consultant Mike Long said that of all the communities in Tompkins County the most growth is focussed in Lansing.

NRP was released Wednesday from a purchase agreement on town center land across the street from the town ballfields.  But other proposals for that area of town include a senior housing three story building by Calimar, and a project by Cornerstone, Lansing Commons, Cottonwood to the west of the town center, and Farm Pond Circle to the east.  Cayuga Farms is a 138 Unit Condominium project on North Triphammer Road between Michaleen’s Flower Shop and Asbury Road.  To the west are smaller projects including Novalane and Sunpath, and to the east new development including Lake View, Cayuga Way, Whispering Pines (Phase 4), Woodland Park and Village Solars. 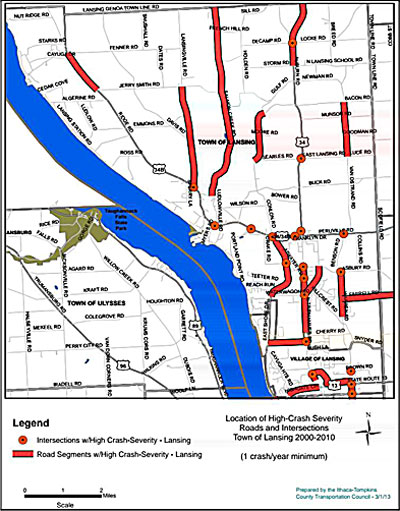 While traffic coming into Lansing from other communities is a factor, Castos said the most significant impact on traffic will come from new development.

"Traffic from the Village and the town line was a smaller percentage of overall traffic, but still significant," he said.  "For the study area in particular the biggest impacts will come from the major shift in development patterns the town will experience."

The study recommends creating a series of pathways and bicycle paths that would connect areas of the Town with the Village of Lansing, in part to encourage alternative forms of transportation to relieve automobile traffic.  Bringing more bus service to Lansing was also raised.  Castos said that the Town should consider taking measures to attract more bus ridership to show Tompkins County Area Transit that there is support for bus service in Lansing.

"There's a chicken and egg issue there," Castos noted.  "People don't use it because there are only two runs in the morning and two runs at night.  They don't offer the service because they don't see that user base.  In my experience it's a matter of signaling that the community is ready to take things to another level in terms of trying to generate ridership."

Additionally the students recommended what they call 'transportation-oriented development' like a town center where people could live closer to where they work and shop.

Councilwoman Ruth Hopkins said the study will help provide supporting material when applying for grants to improve roads, add bicycle paths or walking paths or sidewalks.  At Wednesday's Town board meeting she said that the team may be interested in a followup project next semester.

"Michael Long and I have forwarded the transportation report to Tompkins County for inclusion in their updated transportation plan," reported Lansing Supervisor Kathy Miller.  "We're requesting that consideration be given to including it in a specific traffic engineering study to be included in the New York State transportation Improvement Plan.  We're asking the state to provide money for a real, in depth traffic study for Lansing.  That's what Design Connect has enabled us to do."