About 25 Lansing residents attended a public hearing Monday on the Cayuga Farms development, planned for a 31.5 acre site along triphammer Road, south of Asbury Road.  Most were neighbors who wanted to voice concerns about increased traffic, the nature of the 102 planned rental units, impact on property taxes, and the impact of proposed sewage package plants on local streams.  Project Engineer Timothy Buhl and Town Engineer David Herrick were on hand to explain the project and answer questions.

"The idea is to capture the transient market of people coming from urban areas to work at the colleges," Buhl said.  "They would ultimately buy a house, but don't know where to locate.  We're looking for young, two-worker families.  It's an in-between type of rental of higher-end people that we're looking for."

Cayuga Farms has gone through several changes over the past recent years.  Originally it was conceived as a 144 unit townhouse condominium community.  Today it is being packaged as a 102 rental two and three bedroom townhouses with one or two-car garages in a total of 21 buildings.  Buhl characterized it as a high-end development targeted at young families who may have moved to town to work here, renting for a while before purchasing a house.  He said rents will range between about $1,800 and 2,200 per month.

"If you look at the project, it's downsized from what this was three years ago," Buhl said.  "We had 144 units then, and we scaled it back, both in area and in the number of units down to 102."

An artist's elevation of the proposed design for the townhouse buildings 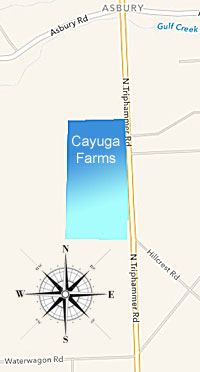 Cayuga farms is proposed for a 31.5 acre site south of Asbury Road and west of Triphammer RoadA portion of the property is in the Lansing Consolidated Water District, and the developers will petition to include the entire property so it is serviced by municipal water.  Buhl said that will not change the cost of water to current residents because the developer will bear the cost of new infrastructure, including fire hydrants.  When residents worried that their already low water pressure would be impacted, Herrick explained that it would not, and noted the Town is building a new water tower on the Lansing/Dryden line that should increase the pressure for some water customers.

The project will be three or four phased, depending on market conditions.  The first phase will produce 44 units on the north end of the property.  If the full project is completed over a five year period as the developers hope, the community will include nine buildings with 6 townhouses each, plus 12 buildings with four townhouses each, with a private road dividing the property, and another that intersects Triphammer Road across the street from Horvath Road, making that three-way intersection a four-way.  Buhl said the owners plan to install two bus stops, one on the property and the other on Triphammer Road, and hope to convince TCAT to increase bus service to the area.

"We did our own study, and another study was just presented to the Town Board," Buhl said.  "The peak hour generation will be about 50 additional cars.  Even though sometimes it doesn't feel like it, Triphammer Road is still under capacity.  It's only operating at about 60% of its actual capacity.  We're not even going to put a dent in it -- we're going to increase it by maybe four or five percent as a result of this project."

The private traffic study says that the project is expected to increase traffic by 10% or less in the morning and evening peak traffic hours in the immediate area of the project, and significantly less as you travel south on Triphammer Road.  The study found that between 7,000 and 8,000 vehicles currently drive past the site each day, with 650 to 750 vehicles passing during the evening peak hour.

When residents complained that the area, especially the intersection of Triphammer and Asbury Roads, is already a high-traffic accident area, they wanted to know why the Town had not installed a traffic light there.  Planning Board members explained that the Town has tried to get a light there from time to time over the past 30 years, but it is not within the Town's jurisdiction to approve a light.  They noted that the intersection is not part of the project under review.

"We're not ignoring it," said Planning Board Chairman Tom Ellis .  "The board is limited on what we can do, command or demand by virtue of what the State will allow us to do.  We're not turning a deaf ear to you."

Before the public was invited to speak, Ellis explained that the project specifications are within the zoning requirements for the area, and that the developer is not asking for a variance on the area zoning.


One resident noted that the town has reached the limits of availabe natural gas and asked whether that impacts this project.  Buhl said that it does, and that the plan is to use propane appliances until more natural gas capacity is brought to the area.

"This project is an allowed use in the R2 area," he said. "It doesn't require any zoning variations.  They have the allowable acreage for the number of units and infrastructure they are installing."

Answering concerns about the effectiveness and management of sewer package plants, Buhl said the package plant technology planned for the site is top of the line, and would be subject to NYS Department of Environmental Conservation and Tompkins County Health Department regulation.  He told residents that he believes the developers will be responsible managers of the development.

"The developers I am working with are top shelf," Buhl said.  "They pay their bills, they're environmentally conscious.  They're good people.  I believe this project will be well managed ad well run."

Ellis said that the public hearing would remain open for another month or two to give all residents time to look over the documentation and specifications, and to voice any further concerns before the project receives final approval.