The Village of Lansing Board of Trustees Monday voted to set a public hearing time on a proposed amendment to the Lansing Meadows PDA (Planned Development Area). The amendment represents a compromise between the Trustees and the Village Planning Board that, if passed May 1st, will mean that senior housing at the Ithaca Mall will finally become a reality after six years of delays.

"I sat in on the Planning Board meeting a week ago," Mayor Donald hartill told the Trustees. "We now have a consensus so we can go forward. "

Lansing Meadows is expected to be a 20-unity apartment development that will be rented by tenants 55 and older. The residential 'buffer neighborhood' was proposed as a condition of the original PDA which allowed for the construction in 2011 of what is now BJ's Wholesale Club. But negotiations between developer Eric Goetzmann and the Army Corps of Engineers over the location of wetlands on the property delayed the senior housing portion of the project for six years.

Once Goetzmann resolved the wetlands issue, he approached the board with dan amended plan that not only increased the number of housing units to 20, in ten duplex buildings, but he also asked to rezone about 20% of the property back to commercial use. The Trustees voted to consider the rezoning of the small parcel, which Goetzmann intended for a small coffeeshop or diner to which residents of the senior development could walk, a minor change.

In March the Planning Board registered strong opposition to rezoning the little parcel, saying they had no advance notice of the proposed change, that the original agreement was for senior housing to be developed on the Oakcrest Road property, and expressing strong concerns about setbacks. Goetzmann said that going ahead with his plan including the small commercial parcel could mean that construction would begin this summer, but warned that he would have to rethink the whole project if that part were not approved.

Hartill was determined to make the senior housing a reality, advocating for allowing the change. While on vacation he remained in contact with Planning Board Chair Mario Tomei. They hammered out a compromise that they hoped both boards could agree on. It was presented to the Planning Board at its meeting last week with Hartill attending to answer questions.

The commercial portion would be approved, but with a limited list of possible commercial uses, including the possibility of a recreation club for the community as suggested by the Planning Board, and small scale sales, or low or high traffic food and beverage sales. Goetzmann has suggested that a coffee shop or a small diner would be ideal amenities that residents and YMCA members could walk to.

"The list of general and additional conditions are consistant with what the Planning board is comfortable with, and I believe all the other parties as well," said Village Attorney David Dubow at the Trustees meeting Monday. "The revised document from Eric sets forth the setbacks for the property and those will also be incorporated into the Village zoning part." 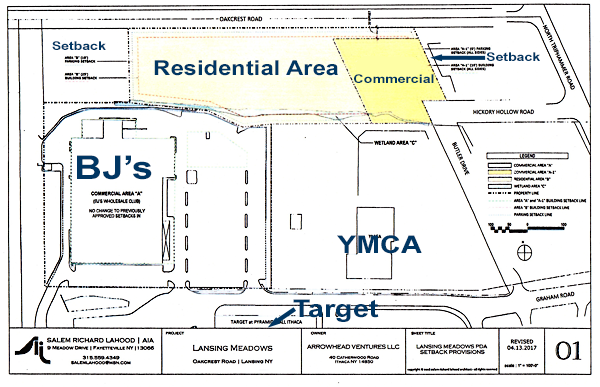 "It seems to reflect all of the concerns that the Planning Board had about the setbacks," said Trustee Ronny Hardaway.

Goetzmann says that if the Board of Trustees approves the amendment to the PDA, he will put high priority on creating the final plans and sending the project out for bid. He said he won't know when the project will be ready for tenants until that process is completed, but says he hopes to begin construction this summer.

"It's a lot of construction," he says. "It's an agressive schedule. I want to get it done as fast as I can."

After the public hearing the Board is expected to vote the change, which would permit part of the property to have a commercial use such as a coffee shop, into law.  The public hearing is scheduled for 7:35 at the Village Hall Monday, May 1st.