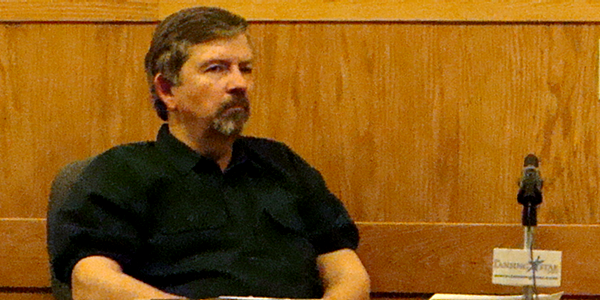 Lansing Town Supervisor Ed LaVigne gave an impassioned speech Wednesday on the power plant tax impact and his view on the County interfering in Lansing's welfare. "You've got one pissed off supervisor on your hands now", he said.
LaVigne says Lansing is going it alone in the wake of power plant devaluation

Lansing Town Supervisor Ed LaVigne gave an impassioned speech Wednesday on the impact of a new reduction of assessed value in the new Cayuga Power Plant PILOT (Payment In Lieu Of Taxes) agreement, recently negotiated between plant officials and the Tompkins County IDA (Industrial Development Agency).  LaVigne told the Town Board that the negotiated plant value, most recently at $60 million has been reduced to $35 million.  LaVigne said it will decrease to $25 million next year, then to $20 million in the third year, and added that there is no certainty that it will maintain its $20 million value beyond that time.  LaVigne said that the reality of the plant closing will impact Lansing property taxpayers.

"All those people who wanted to have a dead power plant, you've got it," he said.  "If that's the case, good luck with your taxes, because you know what?  Five years ago that power plant was $150 million dollars.  What other community can keep the level of our schools and our town and take a whack like that?  So Michael (Lansing Planning Consultant Michael Long) and I went to the PSC, and you've got one pissed off supervisor on your hands now."

LaVigne went on to excoriate Tompkins County and municipalities within the County for what amounts to sabotaging Lansing's development and future.  He referenced the Tompkins County Energy and Economic Development Task Force (EEDTF) and its announcement last February that it had collaborated with NYSEG to come up with a plan the power company submitted to the PSC that would encourage renewable energy alternatives, in part by extending the current moratorium on new natural gas customers in Lansing indefinitely.  He also criticized strong neighboring communities' opposition to repowering the coal-fueled Cayuga Power Plant, Lansing's largest property tax payer, with natural gas, with the result that it now appears the plant in on a path to closing.


(Click the Play button to hear Lansing Supervisor Ed LaVigne on the
decreasing value of the Cayuga Power Plant and its economic impact on Lansing
at Wednesday's Town Board meeting.)

Referencing an earlier Board discussion on shared services, LaVigne said Lansing is going it alone.

"Right now The County is on the sh** list as far as I'm concerned," he said. "They've done nothing for us. They want us to join their parks program? No thank you! We'll show you how it's done right."

"People want to come to Lansing regardless of all the 'help' that Tompkins County gives," LaVigne continued.  "As far as I'm concerned we don't really need your 'help' any more.  Why don't you stay in your own towns and take care of your own people and quit trying to do it with me?"
v13i16
Tweet