Lansing Town Sewer - It's Back!

The Lansing Town Board Wednesday approved a Memorandum of understanding (MOU) with the Villages of Lansing and Cayuga Heights that will bring sewer infrastructure as far north as Asbury Road.  The memorandum basically agrees that Town Sewer District #1 will transport its effluent to the Cayuga Heights Sewer treatment plant via Village of Lansing sewer pipes.  Lansing Supervisor Ed LaVigne said the non-binding agreement is an 'agreement to agree on agreeing to agree' on services that will initially allow a new sewer on North Triphammer Road to service two new developments and the RINK/the FIELD.  But LaVigne says that only people or businesses that want sewer will pay for it, and it should have no impact on homeowners who don't want to hook up.

"If a pipe goes by your house there will be no increase of assessed value," he said.  "I got that directly from (Tompkins County Assessment Office Director) Jay Franklin.  So your taxes will not go up because of increased assessed value if you have a sewer pipe by your house.  If you have access to sewer, you would basically buy into it."

The Cayuga Farms project, a 102 unit rental townhouse project on Triphammer Road between Michaeleen's Florist and Asbury Road, is a major impetus for the sewer.  The project has been on hold for several years as the developer has tried to find sewer solutions that would make the project viable.  Developer Jack Young's English Village development will also be one of the first participants if the sewer district is formed.  A rock climbing wall project at the RINK/ the FIELD is the third of the initial participants in the service area. 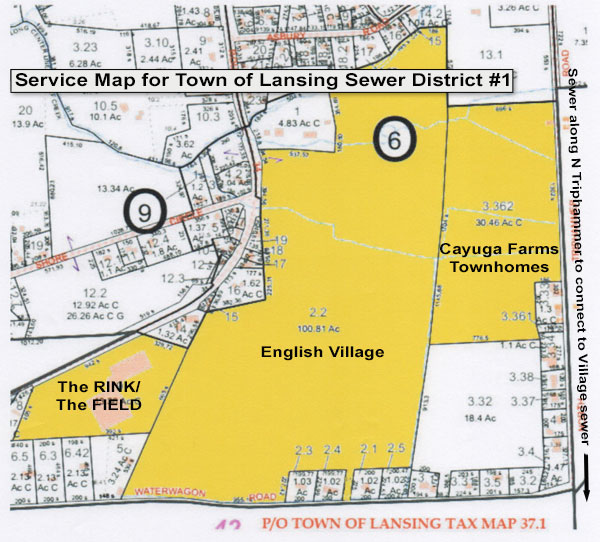 The Village of Lansing doesn't have a sewer district per se, but the sewered area in the Village is extensive, and the trustees are planning an expansion of their sewer over the next two fiscal years.  The Town of Lansing has two sewer districts on Warren and Cherry Roads.  While at least four major efforts to bring sewer to the central portion of the Town have failed, the Town now has developers lined up who not only want sewer, but are willing to pay for it.

In order to facilitate that LaVigne has been negotiating with the Village of Lansing so the volume of town sewage that travels through Village pipes may be increased, and the Village of Cayuga Heights, which operates the sewer treatment plant on East Shore Drive a bit north of the Ithaca/Tompkins County Convention and Visitors Bureau.

Once completed the sewer is conveyed to the Town, which maintains it.  But town taxes are not tapped to maintain the sewer infrastructure.  Instead, those who hook up to the sewer are billed for maintenance and usage on top of their annual tax bill.

"The proposed district will go along Triphammer Road," LaVigne says.  "The intent is to go to Cayuga Farms, because they want to pay for it, and so does another developer.  They will pay for the infrastructure.  It will be what they call a private/public partnership.  Once this is through, if people want to hook up to it, then they'll pay into it."

LaVigne explained that, like a water district, those who participate in the service pay for it, while other town taxpayers do not have any expense toward developing or maintaining the infrastructure.  A critical difference is that in many instances, those whose properties lie within a water or sewer district must pay a fee whether they have hooked up to the service or not, and for the amount they use on top of that.  LaVigne says that only those within this sewer district who hook up to the system will pay.

He said that with the recent devaluation of the Cayuga Power Plant, development in the Town is more important than ever, to make up for lost tax revenue.

LaVigne also said that more accurate meter readings will help provide more accurate data to understand actual sewer use.  He said that because sewer charges are based on water consumption, but noted that it doesn't necessarily correlate, giving the example of a person washing his car in his driveway where the water used doesn't go into the sewer.  He said actual consumption numbers will help allay fears at the Cayuga Heights plant that usage may exceed the plant's capacity.

"If we can get that number down to the more realistic number, that offers more capacity.  The other thing is that Cayuga Heights' plant is starting to feel the wear and tear.  I told them we're the person in the back of the room waving their hand and saying, 'pick me!  Pick me!'  We'd love to be able to give them money toward that.  The way we'll do that is to use their services.  And we'll pay the Village of Lansing because we'll use their transmission pipes, which puts more money in their pockets so they can upgrade their system.  So this is a win-win-win situation."

The agreement must be passed by the boards of all three municipalities.  LaVigne said he hand-delivered copies to the Villages of Lansing and Cayuga Heights.  The MOU is a simple two-page agreement that the municipalities will cooperate, and each will pay expenses for its own infrastructure.