The Lansing Town Board unanimously authorized the sale Wednesday of 13.5 acres of the 153 acre 'Town Center' land on Route 34 across the street from the Town ball fields.  The land will be purchased by Cornerstone Development Properties, LLC for a residential project yet to be developed.  No purchase price was disclosed.

"They submitted a proposal that would have a base contract for 13 1/2 acres, and then 8.9 acres as an alternate," said Lansing Planning Consultant Michael Long.  "There would be two pieces of adjacent property that we would be looking for approval to go to the next step, which is submitting applications to get their funding together."

While the board dealt specifically with the Cornerstone Development Properties LLC contract Wednesday, there are actually proposals from two developers, two different parcels, and three contracts because one of the developers has an option on a second parcel.  Long said the second contract was not before the Board this month because legal issues are in the process of being ironed out. 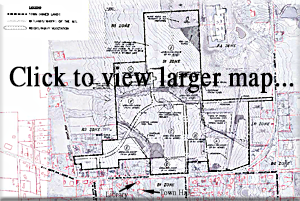 "There are two specific proposals that we are evaluating first and trying to bring to the Town Board," Long said.  "The first is in the C area, which would be a proposal for a contract for a developer to put together a housing project.  It would be a subsidized facility.  There are opportunities for things of that nature.  They are working on a timeline where they have to have an application submitted in June, which is one of the reasons we are trying to bring it to the Town Board tonight."

The Town purchased the 153 acres for $109,500 in 1992 with deed restrictions, placed on the land in 1933, that limited its use to parkland, town buildings, and recreational use.  Town officials tried for years to get the restrictions lifted.  It looked like a final agreement was near in October of 2011, but it was held up when Albany said it would cost an additional $490,500.  The Town came to an agreement with the State in March of the following year.  Lansing paid the State $294,800 to lift the restrictions, freeing it to pursue a Town Center plan.

Three developers responded to an RFP (Request For Proposal) tendered by the town, and presented their plans to the Town Board in 2012.  Their plan was a close match to one the Town Center Committee had developed, including housing for seniors, first time home buyers, and the potential for a small retail area adjacent to 34B.  But after a flurry of initial activity the projects fizzled out.  Last year another RFP was developed, resulting in the current proposed contracts, which town officials says also meet the desires of the Town Center and Comprehensive Plans.

"It doesn't just reference the Comprehensive Plan," noted Councilwoman Katrina Binkewicz.  "It actually refers back to the 2010 planning process for which a lot of people were involved, giving their opinion for the need for more diversified housing options for themselves as they scale back lot size, then become seniors who want to stay in town, their kids who can't afford to live here.  The project will serve a wider variety of people, while maintaining a high standard of management and professional workers."

Cornerstone Development Properties, LLC is a Rochester-based developer and property management company.  The company manages a number of business parks and rental residence projects around the state, including properties in Greece, Clifton Springs, Rochester, Watertown, Fairport, Perry and Brockport.

Town Attorney Guy Krogh said the project will go through a lengthy process of approvals and design.  He said there is just a general project at this point, and with Wednesday's approval Cornerstone will develop a plan to support their subsidized funding application next month.

"The project will probably be very different from what is thought of at the moment," he said.  "Right now there's no proposal pending.  It's just a conditional land sale."

"By the time they do their due diligence, environmental concerns, their surveys and things of that nature, we're certainly going to spend a significant amount of time going through that process," Long said.

After much discussion, the Board unanimously passed a SEQRA (State Environmental Quality Review Act) negative declaration of significant environmental impact of the sales including all three parcels.  Krogh noted that while there may be wetlands on the overall property, they have not officially be designated as wetlands, and the properties being sold are not near wet areas in any case.

"Neither of these parcels are in those areas," he said.  "Those areas are specifically protected from being developed by the development plan for the site.  So there are two ways those areas might be particularly protected.  But that would come in the permitting process, not in the land sale.  Selling the land in and of itself is not going to affect the wetlands."

Krogh also assured the Board that the Lansing Center Trail would be protected in these and future land sales.

"Integrating the existing trail systems is part and parcel of what's being looked for in terms of the site," he said.  "It will also match the Smart Streets Plan and other pieces.  It's not just that they agree to it -- it's also in the agreements."

"The market analysis dictates that we need to have a diverse type of housing," Long said.  "This starts to fill some of the bill in that respect as well."