Assemblywoman Barbara Lifton (D/WFP-125AD, Tompkins/Cortland) announced yesterday that she and NYS Assembly Committee on Environmental Conservation chair Steve Englebright have sent a letter to Department of Environmental Conservation (DEC) Commissioner Basil Seggos calling on the DEC to enact a moratorium on permits and avoid approving activities that would lead to expanded salt mining under Cayuga Lake.  Lifton held a press conference at Stewart Park with the lake as a backdrop.  She and Englebright called on the DEC to halt Cargill's mining operation under Lake Cayuga and mine under dry land instead.

"During the last year I've grown increasingly troubled about the Cargill shaft permit application that could have the effect of expanding of expanding the vast salt mine directly under Cayuga Lake," Lifton said.  "These concerns are shared by many of my constituents who drink water supplied from this lake, live near the lake, or simply treasure Cayuga Lake as much as I do." 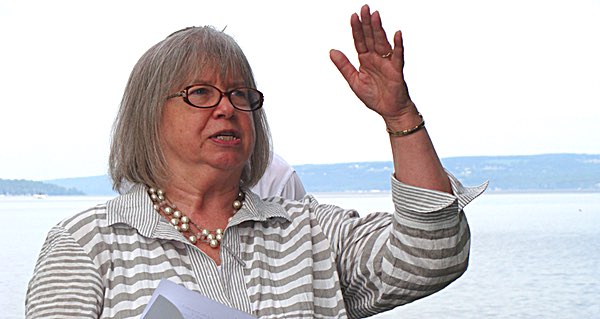 NYS Assemblywoman Barbara Lifton at Stewart Park Thursday, called for Cargill to mine under dry land, rather than under Cayuga Lake. Photos by Karen Veaner

Lifton said her hometown of Geneseo was close to the largest salt mine in the United States, located in Retsof, NY that collapsed and flooded with water in 1994.  Lifton called it the worst salt mining disaster in New York State history and said it resulted in sink holes, land and property damage, and hurt local water wells.  She said the mine was so large it took two years before it entirely filled with water.

"If we've got a potential huge risk we just can't take it," she said.  "We're going to have to be creating jobs elsewhere.  But that's not the case here.  We get a win-win.  We get to protect the lake and we get to move the salt mine and keep all those good jobs here."

Tompkins County legislator Mike Sigler (R, Lansing) says the mine has operated safely for a century and said Lifton is working against Lansing residents' interests by threatening 200 jobs.

"This would end the livelihoods of 200 miners and their families; some are second and third generation miners," he said in an email to the Lansing Star Wednesday. "These are your neighbors, your friends, your families. It would increase the salt expense for the county and towns by and estimated $1 million dollars increasing your taxes, and increase the county's carbon footprint as the salt would have to be trucked in."

"I can't understand what the problem is with this," said David Cornelius, who was part of a mine survey team in the late '60s before Cargill bought the mine.  "When we were surveying we were working at 1,700 feet below sea level.  The lake surface is 364.  That would put sea level down near the bottom of the lake.  There were 1,700 feet of rock and stone between the water and the tunnels.  Even if the mine collapsed it would only lower the lake level maybe six to eight inches.  So I don't see the problem." 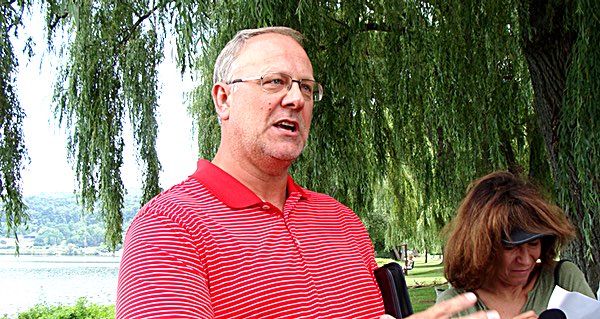 Cargill Mine Manager Shawn Wilczynski said at least three or four independent geologists, at least one chosen by the DEC, review safety issues each year.  He said the company provides an annual report to the DEC, including a mine stability analysis, and asserted that the DEC has provided "tremendous oversight" of the mine.

The 100 year old mine is the deepest salt mine in the United States, currently employing 200 people who provide two million tons of rock salt, about half of which is used on roads in New York State.  The reason the company wants to drill a new 2,500 foot deep mine shaft is that they have mined nearly to the limit they can transport air and electricity to insure the safety of the miners.

Lifton said she and Englebright, who is also who is a geology professor at SUNY Stoneybrook, recently met with with high-level DEC officials, Toxics Targeting President Walter Hang, local activist John Dennis, and geology Professor Richard A. Young regarding concerns that expanded salt mining under Cayuga Lake could pose potentially catastrophic risks to the lake in the event of a mine failure. In the letter, Lifton and Englebright call for the DEC to prohibit future mining activities under Cayuga Lake and, as an alternative, to focus on mining under the adjoining dry land instead.  Lifton said DEC officials told her they have urged Cargill to negotiate with landowners near the lake so it can mine under dry land.  She said shifting from beneath the lake to dry land would preserve local jobs while protecting the lake.

In June Cayuga Lake Environmental Action Now (CLEAN) held a public education forum at which Young presented his findings.  At that time Young said, "Salt mining activities directly under Cayuga Lake raise troubling questions about the inadequately documented geology which could potentially lead to irreparable impairment of the source of drinking water for more than 30,000 local residents." 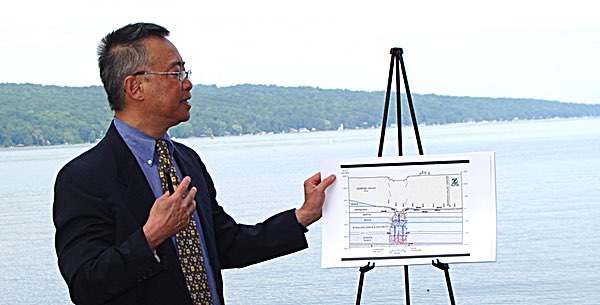 Hang presented some of Young's findings yesterday, and said Young's data shows geologic horizontal forces are pushing from the side, and can create an upward force from Cayuga Lake similar to the Retsof incident.  He said a citizen's coalition would be sending a letter to 10,000 echoing Young's concerns, and a letter to Governor Cuomo requesting a prohibition on issuing any permits or approvals that could lead to continuing salt mining under Cayuga Lake.  He was unable or unwilling to say how many people currently make up the coalition, only saying he would know after the letter was sent. 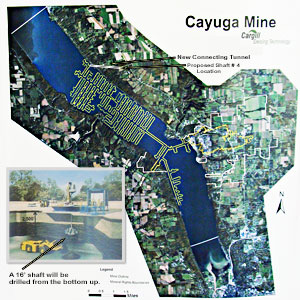 Most of the Cayuga Salt Mine is under Cayuga Lake. (Graphics courtesy of Cargill)"This might be new information for some," he said yesterday.  "I don't believe it's new information for Cargill or their geologists for the past 15 years.  Those things have been considered.  I attended the CLEAN meeting just to make sure that there was no information that came to light that we hadn't considered.  I left that meeting quite confident that we had, indeed, done that."

He added, "We're always looking 25 to 50 years out.  As long as the constituents are going to rely for their safety on road salt Cargill is going to want to be a responsible provider of that.  Part of the reason there is so much knowledge is the work Cargill has done from the geological evaluation that goes all the way up there.  We're very aware of all the potential issues that could arise.  Therefore we're doing mining changes and whatever is necessary to make sure that whatever they fear might happen, we don't cause."

Lifton said she has not met with Cargill, has not been to the mine, nor met directly with Lansing government officials.  She said, perhaps 20 constituents, including some in Lansing, had approached her with concerns about mining under the lake.  She said she had been told that mining under dry land is viable.  When asked why it took over a dozen years since Retsof to raise the issue if it is such an urgent concern, Lifton argued she was being proactive.

"I'm not saying it's urgent," Lifton said.  "I'm saying this is something we need to start moving on.  As Walter just explained, we're talking about probably a decade long transition.  This is not something that will happen over night, nor should it happen over night.  I'm not saying that there's going to be a catastrophic failure her in the next year.  I'd be moving my family out if I thought we were on the verge of catastrophic failure.  I'm talking about a transition period, that based on new geological data, it's come to the fore only in the last few months.  My job is to listen to my constituents and take those concerns to the DEC.  I'm happy to sit down with folks at Cargill."

But Sigler said Lifton is "actively seeking to stop the mining of salt under Cayuga Lake, an industry that's been done safely in Lansing for a century".

"There is no excuse for this," said Sigler. "Mining is highly regulated and this call for a moratorium flies in the face of solid science.  The only reason to deny that science is to win points with a small group of people who seek to position themselves as arbiters of the environment and to express their virtue regardless of the damage they cause to our community and the environment they say they want to protect."

"I'm assuming that Cargill wants to keep their salt mine in business and wants to get the salt that's there," Lifton said.  "They've already got access to it and they've got a trained workforce here.  My assumption is that they'll want to make a wise transition to mining under land.  I'm hopeful they'll look at this data and decide that is the wise course of action."

Wilczynski said mining under the lake requires a permit from New York State, but mining under land would require many permits from several landowners, which has been problematic in the past.  in order to be able to mine all the landowners would need to agree to grant the rights, in much the same way a sewer line can't be laid if a property owner in the middle says no.  Nevertheless he pointed out that the company is not interested in hurting the lake, which would hurt the company and its employees as well.

"We all share the exact same goals," Wilczynski said.  "The protection of this lake is the paramount thing to everybody.  The sustainability of the lake, as mentioned, is absolutely critical to the employees of Cargill, and we are members of this community as well, as are our friends, our families and everyone else.  We're reminded every day that we show up to work where we work.  That lake is a constant reminder for that, so we take extreme responsibility for that and we go to great lengths and have done so, and will continue to do so for as long as Cargill is going to be a responsible steward of the environment and the lake."