Filling Spaces in the Village of Lansing

A new development project was informally presented to the Village of Lansing Planning board last week that would bring 12 townhouses to a small triangle of land behind the M&T bank on Triphammer Road.  Dubbed 'Triphammer Row', the project would include approximately 1,350 square foot townhouses, each with a one car garage and additional parking space.  Developer Robert Poprawski said he hopes to attract older couples and new families to settle there.

"The primary issue is trying to fit some nice residential facilities in that little triangle behind M&T Bank.  The developer is close to closing on that property so we can do something there," said Project Engineer Gary Bush. "We're showing 12 units on the plan (shown below) because that's what we reasonably think we can put there.  Even with the 12 we're going to need some variances, because we're too close to property lines, and things like that."

Poprawski said that some flexibility is built into the design so there is room to add a small elevator for residents who want to age in place as stairs become more difficult to navigate.  He said a target buyer would be older couples who want to down-size, or young families.

Code Enforcement/Zoning Officer Adam Robbs said there would be challenges developing the property, including road access, buffer space, and potential location of a retaining pond.

"This is not going to be an easy property to build on.  There will be several hurdles," he said. Robbs added, "In most cases the Village takes the stance that the BZA and Planning Board, and the Trustees... we don't invite people to come in and try to do business here and then try to restrict them so they can't do anything.  Is it in the Village's best interest to do this?  Is this something that is going to fit in with the Village?  Is it going to fit in with the comprehensive plan?"

Planning Board member Lisa Schleelein said she has strong concerns about a proposed road that would let traffic out through the M&T Bank parking lot, rather than the intersection of Triphammer and Savanna Park Roads.  She said it is difficult to make a left turn out of the parking lot, and would be concerned about new traffic doing so. 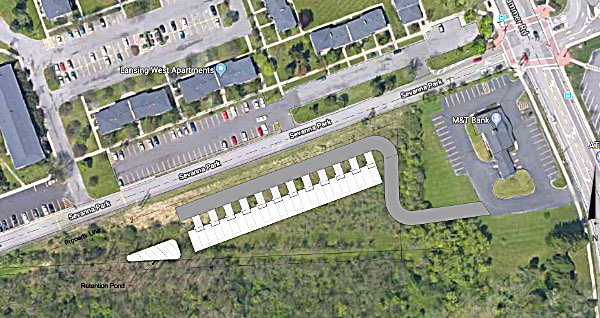 Bush noted that Savanna Park Road is privately owned, and agreed with several members of the board that it would be preferable to be allowed access to that road both for residents and emergency access.  He explained that Cornell owns the property and leases the property fronting Triphammer road to the bank.  He said Cornell representatives told Poprawski that part of the rental agreement requires access through that parking lot should Cornell decide to sell the land west of the bank.  But he agreed that getting permission to use Savanna Park Road would be a better solution.

"We're in the process of trying to get access to go out onto Savanna Park Road, but we're not sure if they're going to allow that," he said. "Obvious we'd love that if they'll let us.  But it's up to them -- it's out of our control."

Bush said the developer's first choice is to subdivide the property, selling each townhouse on its own lot.  But that would require variances from the Board of Zoning of Appeals (BZA) since there would be no space between the units, and thus, no space separating the lots.

"The idea is, hopefully, to subdivide it and sell them as individual lots," Bush said. "Each unit would be on its own separate lot with zero-lot lines.  It would be one continuous building, typical townhouse (construction).  If we're allowed to subdivide it, that's our preferred method, but if not, then we may have to go the condominium route."

Robbs said the first step would be a public hearing on a State Environmental Quality Review (SEQR) at which any Village of Lansing resident could express concerns or support for the project.  He also recommended the developer approach the Savanna Park homeowners association to try to negotiate road access.  Bush said he is in the process of doing that.  Robbs added that despite the challenges, he has informally heard from area residents that they would like to see something developed there.

"I've heard from a couple of people that live in the area... they know something is going to go in there but they aren't really aware of what it is," he said. "They'd like to see something there because there hasn't been anything new in the area for a while.  It might bring some new residents.  it might bring some new people in that will look at vacant places in their area."

Bush asked for a general idea of whether board members think it is a good project.  Planning Board member Carolyn Greenwald said yes.

"I do, too," Schleelein said. "I have major concerns about the roadway part, but I think the size is nice for people who want to down-size.  I think ownership is a good idea."