From the developer's point of view their proposed 109-unit Lansing Village Cottages project would bring an idyllic collection of pocket neighborhoods arranged around ample shared green space, fulfilling a need for increased housing for seniors, aligning with the Village of Lansing comprehensive plan, creating benefits for the Village, and helping to meet county goals for new housing.  From neighboring property-owners on Millcroft Way, the project is a gross violation of zoning and a covenant they were required to abide by when building their homes there, not to mention a threat to their property values.  Both sides had their say Monday after Steven and David Beer, of Beer Properties, LLC returned to present their case for the third time.

"I think there's enough concern on all sides that one of the things we have to do as a village is 'due diligence'," said Mayor Donald Hartill. "That means more than one set of eyes to look at it.  I'm very sensitive to that because we've had a number of Article 78s charging that we didn't follow proper procedures.  So my proposal is that the Planning Board look carefully at this from a planning point of view, and come back with a recommendation to the Board of Trustees."

The Village faced a lawsuit and appeals brought by IJ Construction Of Ithaca, LLC in opposition to a similar controversial zoning change on a property on Bomax Road that would allow a 140 rental townhouse project to be built in proximity to their neighborhoods including Heights Of Lansing on and around Nor Way.  The complaint charged that the Village did not properly follow municipal procedures in changing the zoning, and even prompted owner Lisa Bonniwell to challenge Hartill in the last mayoral election.  The Village prevailed in court, but Hartill said the lawsuits were expensive, and said he wants to make sure that the process on this new proposal is above reproach so it could stand up in court if a lawsuit results from any decision the Board of Trustees makes.

The last time the Beers addressed the Village Trustees they were rebuffed when they asked for guidance in a successful Planning Development Area (PDA) application, with Village Attorney William Troy telling them that developers are expected to be familiar with Village law before applying for a PDA.  This time they had read the ordinances, and adjusted their plan to address concerns that had been raised by neighbors and village officials.

"Our concept for cluster housing is close-knit neighborhoods, and providing lots of green space -- trees, shrubbery, gardens, and so on," sad Steven Beer. "The structures that we build would be built with green intentions, as far as the nature of their construction.  In contrast to the meeting that we had before, we followed as well as we can, Chapter 145, appendix A2 that give very specific instructions on how to apply for a PDA." 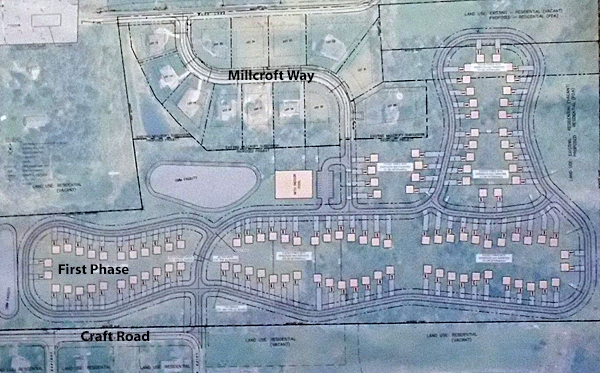 Lansing Village Cottages Plan shows 109 units (the little grouped squares) arranged in five 'pocket neighborhoods'. The Millcroft development is shown above and to the left of the cottage areas.

The Beers came back with an amended plan that reduced the curb cuts to one outlet on Craft Road, combined the first two pocket neighborhoods planned for a first phase of construction, and proposed buffer foliage between their development and the residences on Millcroft Way.  In an effort to appease traffic concerns raised by the Millcroft neighbors they proposed that a new road connecting to Millcroft Way would be closed to all traffic except emergency vehicles.

Neighbors said that the proposed density of the pocket neighborhoods violates the current zoning, and challenged the need for changing the zoning as it stands.

"This notion that it's dramatically increasing the density... no," said David Beer. "The units would be closer together, and in order for this pocket neighborhood configuration to work they have to be closer together.  But the overall density on the 41 acre site is not dramatically different from what's allowed as it exists."

Steven Beer argued that the project meets several goals outlined in the comprehensive plan, including encouraging development with sidewalks and bike paths; limiting curb cuts; building smaller and more affordable houses; building for an aging population; allowing for flexibility in residential zoning; considering cluster development; among others.  But one neighbor charged that the developers were 'picking and choosing' goals that meet their needs, and ignoring others that don't.  Another Millcroft resident, Gustavo Flores, challenged the proposal on many levels that questioned the benefit of the project to the Village, as well as possible detriments to his neighborhood.

"We're not anti-business or anti-development by any means, but we're certainly concerned about the negative impact of this development," Flores said. "The proposal seems to develop 'pocket neighborhoods, which is a neat sounding euphemism for cramped housing, traffic congestion, and transient living.  The proposal calls for not one or two, but nine of these neighborhoods.  Nine neighborhoods in about 40 acres. There is a lot of wishful thinking in this proposal and the Village could very possibly end up with a white elephant right in the middle of it.  So think not about the nice pictures of cottages right now... think about what this will look like ten or fifteen years from now."

Flores challenged the uniqueness of the approach in modern times, saying that the Village already has closely knit, beautiful sustainable neighborhoods with natural features, that are welcoming to pedestrians and bicycle riders.  He also said that there are several senior housing developments already, including new ones that have just been built, and he is not sure that "we need to flood the market" with them.

"I would like to respectfully point out that the development in question does not live up to the spirit of the zoning rules that the Village has put forth," he charged. "I quote Section §145/41 -- High Density Residential (HDR) District that say the '"'The legislative intent of this section is to define and establish standard regulations for the Village where predominantly residential development is the desired land use; where high-density development is the most efficient use of land areas which are adjacent to major highways and shopping facilities and which are served by public utility systems.'  Last I checked the area in question is not adjacent to a major highway or shopping facilities.  In short the drastic changes proposed here represent a major drawback to the Village, its character, and its long term sustainability."

"My read so far is that it is going to be fairly difficult to come back with a positive recommendation," Hartill told the Trustees. "So I am going to ask that my colleagues on the Board of Trustees ask by a formal vote for the Planning Board look at this again."

The Trustees voted unanimously in favor of asking the Planning Board to review the benefits of the proposal to the Village from a 'planning perspective'.  Planning Board members present were somewhat perplexed, asking exactly what the Trustees expected them to do.

"You've given the task to the Planning Board to come up with some ideas," noted Planning Board Chairman Mario Tomei. "I want to ask the Trustees to not forget that we're looking for some help in coming up with a decision on this."

Planning Board member Lisa Schleelein asked for clarification on what the Mayor meant by 'due diligence'.

"You guys need to look at this," Hartill replied. "Does it make any sense for the Village?  Is there any benefit?  It's a question the Planning Board has a different outlook on than we do in terms of our fiscal responsibilities.  What we really need to do is look at a project like this from the point of view that says as much as they like to sugar coat it, it is a significant zoning change.  That's the part we need to look at very carefully."