The Town of Lansing Zoning Board of Appeals (ZBA) denied a request for a variance Tuesday that would have allowed Bill and Maura Kennedy-Smith to build a grouping of rental micro-houses on the corner of Hillcrest and Warren Roads.  The property, zoned I/R (Industrial/Research), must either receive a variance to allow residential structures, or be rezoned, a lengthier process that is currently in its early stages as the Town Planning Board has begun considering updates to town zoning.  The owners argued that allowing the project would keep profits inside the town, that it meets the goals of the newly revised comprehensive plan, that it would maintain the character of the neighborhood.

"We're local Lansing residents.  I think this could be a good way to allow for a variance so that local people can develop their land," said Maura Kennedy-Smith. "If we were going to go with what the current zoning allows, we wouldn't have the capital to build an office building or some large industrial project.  It's a way of keeping the capital and the profits here in Lansing.  We live across the street so clearly we're going to care about what's happening there."

In a public hearing at the Town Hall Tuesday the owners and project engineer Gary Bush made their case.  Two letters were read into the record, one from a neighboring couple protesting the five micro-houses, but saying they would support a duplex being built on that property if a zoning change were made first.  The second letter supported the project, reiterating some of the points the Kennedy Smiths made.  There was some discussion about a vast number of rental units recently constructed, under construction, or planned in Lansing for the near future.  Bush said that rents on these homes would be much lower than the competing developments, and cited evidence that there is demand for tiny house rentals. 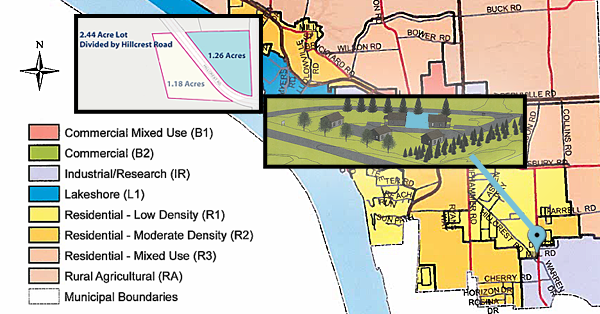 The Kennedy-Smith's home was built in the 1830s, so it was grandfathered in when the IR zoning was established around 20 years ago.  The owners plan to subdivide their property into two tax parcels -- one for their home, and one for the land they want to build the rental units on.  Some Planning Board and ZBA members have surmised that the property was only designated IR because officials drew a straight line when defining that IR zone, one of two significantly sized IR zones in the town.  By that argument the Kennedy-Smith property was arbitrarily assigned a business use even though it could just as easily and logically been made of part of the adjoining R1 zone.  In general that IR zone makes sense because businesses and industry want to be near airports.  But the property in question is on the border between the clearly residential neighborhoods on almost the entirety of Hillcrest Road and to the north.

"I know it's something new for Lansing and I see where the hesitation might be because there are a lot of different steps that need to be taken," Maura Kennedy-Smith said. "But I know there are other proposed developments like this, and this one is on a comparatively small scale.  So if you need to try it out in a small area on a small scale and see how it works, it's not like we're asking to put in 100 units on 50 acres."

When the public hearing was closed ZBA member Peter Larson said that a board determination would have to come down to four criteria that need to be met in order to approve a use variance.  ZBA Chairman Hurf Sheldon read the criteria, then the board deliberated on whether the applicants had met the four standards.

If the project is approved either by a variance or a zoning change, the plan calls for each house to be a total of 421 square feet, with one 93 square foot bedroom, a 260 square foot living-room/kitchen, a bathroom and a closet.  After being denied sewer capacity for the project Bush said three septic systems would have to be installed, two of them servicing two homes each, and the third the remaining house.  He said that the area needed for the septic systems plus future backup locations allows a maximum of five micro-houses, and that is how the number of units was determined.  Bill Kennedy-Smith said that they would be built one at a time so they could be rented as each is completed, because funding for the project is limited.  Bush suggested that the variance could be for "up to a maximum of five houses" because it is not certain at this point that all five would be constructed.

The denial of the variance does not mean the project has been killed.  But in a sense the project is before it's time, or zoning ordinances are behind the times.  With small individual houses growing in popularity, building small scale neighborhoods defies zoning laws that were designed for conventionally sized homes.

Current Lansing zoning law has no provision or definitions of the amount of allowed density when tiny houses are grouped into pocket neighborhoods.  An area variance to determine the number of allowed homes would not be required unless the use variance had a condition attached requiring it.  Under current zoning, an area variance would also be needed in an R1 zone if that many houses were to be built on that small a lot.  So receiving a variance on their IR property may have solved the density hurdle in a way that a zoning change may not.

The applicants have three choices.  Town Attorney Guy Krogh said they could either wait for a zoning change or challenge the ruling.  Sheldon added that they could submit a new application, but include detailed documentation on the two criteria they had not sufficiently proved.

Since the passage of the comprehensive plan revision last May the Planning Board has begun considering zoning changes, including a potential change to the Kennedy-Smith's lot.  If projects such as this one are to be successful, Lansing Planning Consultant Michael Long says that revised zoning ordinances will have to include definitions of tiny houses and small homes that are larger than the standard definition that says a tiny house is 400 square feet or less, but are still quite small by conventional standards such as the proposed micro-houses, so called because they slightly exceed 400 square feet.

Krogh said it is up to the Town Board to decide whether a zoning change should be made.  The Town Board has charged the Planning Board with the task of studying the issue, including a somewhat controversial new AG (Agriculture) zone that could potentially cover most of the northern portion of the town, and to forward zoning change recommendations to the Town Board for possible adoption into law.  Sheldon said the ZBA would recommend that, but the board had to deny the application because it did not satisfy all four of the required criteria.

"What the ZBA can't do is change the zoning," Sheldon said. "We couldn't meet the criteria for the use variance.  I think the idea of the project is great.  I think it's the perfect property to try something like this.  To be completely frank I think the architecture could be more innovative, but other than that I think the use of the land in the proposal is pretty good, especially with what else is going in in that neighborhood."