Village Says No To Cottage Project

They say 'be careful what you wish for'.  After earlier versions of the Lansing Village Cottages project that would have brought 97 rental units in 84 buildings, most of them small cottages, to a property south of Millcroft Way, grouped in pocket neighborhoods around shared green space.  After nearly eight months of deliberation, developer Steven Beer asked the Village of Lansing Trustees to come to a speedy approval of a Planned Area Development Area (PDA) that Beer Properties deemed necessary in order to build the newest iteration of the project.  He got 'speedy'.  The Trustees voted unanimously that night to quash the project.

"The Village has a very good zoning law," Mayor Donald Hartill told the Beers. "It's been enforced since 1974.  PDAs are only there as a possibility for something that's extremely desirable for the Village. In the past we've been very careful about PDAs, so our real stability is in the zoning ordinance itself. To make an exception to that with a PDA, the threshold is very high.  While there are some features this project has that could be attractive , I'm not convinced that it survives that threshold."

The plans all revolved around the idea of tight-knit communities based around 'pocket neighborhoods' of cottages that are very closely spaced and arranged around a common park-like green space.  Developer David Beer explained that the close spacing of the cottages is essential to the concept.  But the zoning law defines larger setbacks between properties, so despite the fact that the density of numbers of units in the proposal meets existing zoning requirements, the density of the placement of buildings does not.  Thus a PDA would be essential in order to create the three pocket neighborhoods (just shy of 17 acres of a 41 acre plot, and reduced from the original nine pocket neighborhoods depicted in the plan).  In the new plan a great deal of land to the north remains wooded, though the developers did not rule out developing that portion of the property in the future if their concept proves to them -- and to Village officials -- a success.

The 40 cottages proposed Monday would have be about 1000 square feet, and each would have one or two bedrooms, a loft area, a garage, and would be heated by heat pumps because the moratorium on new Lansing natural gas customers remains in place.  To address Village concerns that the back of the cottages facing South would be an eyesore, the Beers presented a rendering (shown at the top of this article) showing an attractive grouping of cottages, and a man pushing a wheelchair along a sidewalk to illustrate that the development, intended for renters 55 years old and up, would be ADA compliant.  David Beers noted that driving needs of elders are different from those of daily commuters, so additional traffic during peak driving hours would not be significantly impacted.

When challenged about future development plans for the wooded area, David Beers replied that his company would have to apply to the Village for a new project, and it would be in their power to approve or deny it at that time. 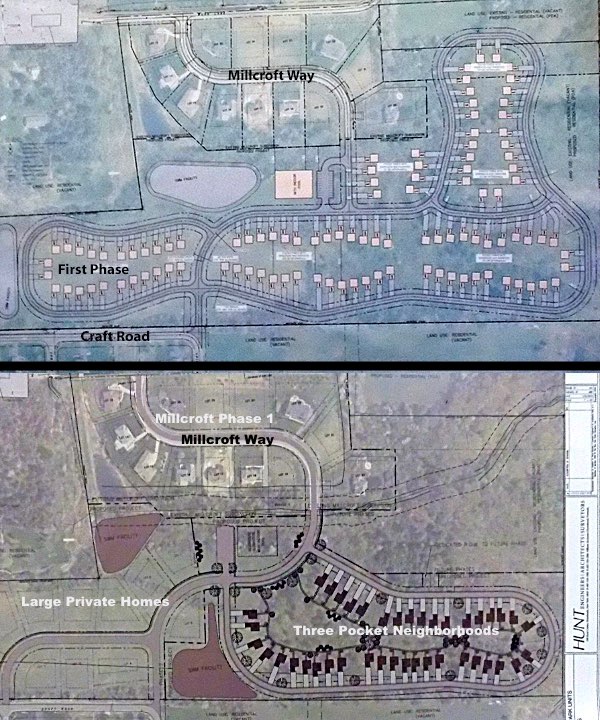 The Plan at the top was rejected by the Planning Board in December. It would have included 84 buildings, most cottages, and a few duplexes for a total of 97 rental units. At bottom is the plan presented Monday, with the number of cottages more than halved at 40, and lots for sale for 11 single family houses.

When the project was first proposed, Millcroft Way homeowners came out in droves to protest on the grounds that they had been required to abide by a written covenant, a document that laid out the conditions for purchasing land that included larger lots and a minimum sized home that would guarantee a low-traffic neighborhood where their children could safely play.  Their homes are located in the 'Phase 1' area of the Millcroft development, while the land now proposed for pocket neighborhoods was to be a similarly developed 'Phase 2'.  With the sale of the land pending, attorneys separated the 'Phase 2' portion from the covenant, clearing the way (if the Village approved) for much smaller houses grouped closely together or, really, any configuration of development within the zoning definition or a PDA.

The lots intended for Phase 2 went the way of the covenant in the original plan, but 11 of them were back in Monday's presentation.  The Beers said they intended to sell the lots, and the owners would be responsible for building their homes, as was done in Phase 1. But Hartill noted that the Phase 2 lots have been for sale for many years and have not been marketable.  He expressed doubt that they would be more saleable now.  Hartill also worried that the project would not be financially viable.

"You're working on a 12 percent margin, which is pretty thin," he said.

But David Beer disagreed, replying, "Which, for new construction is in the ballpark.  There are many developments that get done that are cash-flow-negative in the first years.  But because the margins are thin, that's why we absolutely need the 25% bonus that the PDA allows.  Going to a standard cluster development can empirically be done, but then we would only be allowed 32 units.  There would be 25% land set aside so you could not consider the pocket parks as part of that land.  So when you consider the difference between 32 units and 40 units, those eight units allow it to be viable."

The Beers argued that their project is attractive and innovative, in compliance with the Village's own comprehensive plan, and noted that they are not asking for any tax abatement, so increased tax assessment of developed land would accrue to the Village.

But in the end that wasn't enough for the Trustees.  All four Trustees said they agreed with Hartill's assessment that the project didn't present such strong benefits to the Village that it should warrant a PDA.  Trustee John O'Neill simply said "no".  But Trustee Ronny Hardaway said he didn't object to the concept.

"I like the idea," said Hardaway. "I'm just not sure that the location is the greatest.  If we decided to go forward I would definitely want to go back to the Planning Board for a review of the substantial changes to the design."

During the several months of deliberation last year the two sides did not appear to understand the others' point of view.  David Beer repeatedly asked whether Village officials understood and could possibly approve of the pocket neighborhood concept, while Village representatives continued to ask what benefits warranted putting zoning law aside for a particular project.  Village residents account for about 31%, or just under 1/3, of the Town of Lansing's population.  The Village was incorporated in 1974 in large part because Town of Lansing officials didn't want zoning, but encroaching businesses including the mall fueled Villager's desire to control development in their neighborhoods.  That desire for enforceable zoning has historically been the backbone of Planning Board decisions in the Village.  While other municipalities are more liberal with granting PDAs, only two have been created in the entire history Village of Lansing.

As the discussion ran close to an hour long, Hartill tried to put a stop to it.

"We've had enough back and forth," he said. "My read of what my colleagues say that threshold for a PDA has not been reached.  So I think we should stop this enterprise, unfortunately."

Steven Beer gave it one more try, saying that he was surprised by Village resistance to a rental community.

"I was really surprised to hear that one of the objections was that we're proposing all rental cottages, rather than home ownership," he said.  "I didn't see anything in the code, or in Appendix A2 saying anything about that.  I grant you that from the material I've read in Village documents that something like 68% of the housing in the Village now is rental, and 33% is home ownership... that's basically what we're proposing to do.  We're proposing 40 cottages that would be rental, and 11 homes that would be home-ownership.  So we're not changing the ratio at all.  Furthermore, if that is a consideration whereby we don't meet the threshold, you and the Planning Board could have told us that eight months ago."

"We've tried to suggest that as a problem," Hartill replied. "And it's been ignored, quite frankly.  It's not just rental housing. It's the whole design with very small setbacks, etc.  That's the problem.  I'm a very patient person.  I think we're pushing the envelope somewhat at this point."

Hartill asked for a motion so say no to the proposed PDA.  Hardaway moved it, with Gerry Monaghan seconding.  The vote was 5-0, and the project was dead.