How Lansing Meadows Has Changed

Lansing Meadows has undergone at least nine major design changes over the past nine years.  It began as a 12-cottage development for seniors 55 and older, with wetlands, walking paths, and a bird sanctuary.  Building the housing was a condition of the PDA (Planned Development Area) the Village of Lansing granted the developer in order to build BJ's.
Over the years it morphed from cottages to apartments buildings to a three-story apartment building, and back to cottages, then duplexes with 20 apartments were approved last year.  Now the developer wants 30 units in ten triplexes.  Here is a look at some of the changes.

Developer's artist's rendering of the rental homes originally proposed in 2010 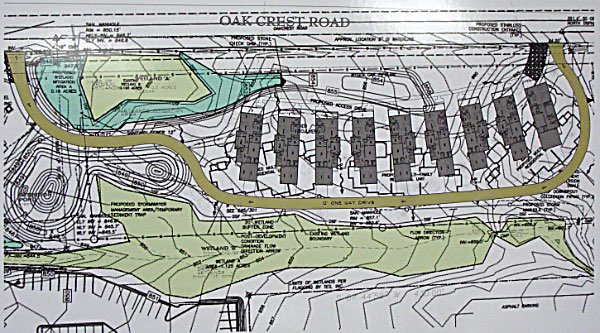 A 2017 design for a three-story apartment building 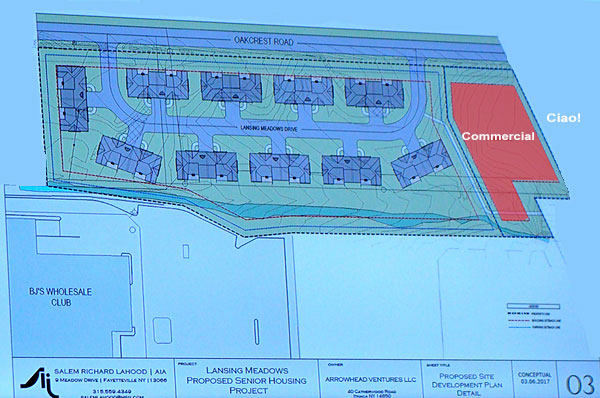 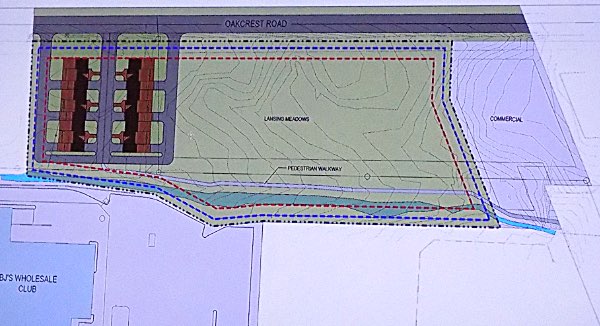 A plan rejected in 2018 places 12 apartments in two buildings on the west side of the property. The buildings buffer the view of BJ's Wholesale Club and the mall from view to properties in the north. A long walking path connects the buildings to a small commercial plot that may be the site of a coffee shop or diner near the YMCA. 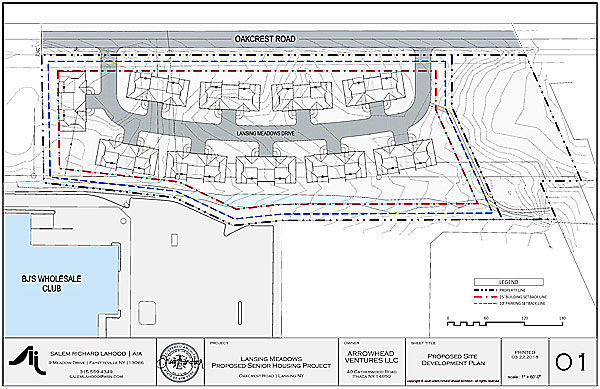 In April of 2018 a plan for 20 senior rental units, arranged along a semi-circular road was approved. A plot of land to the east (right on this plan) was re-zoned for a commercial use such as a coffee shop senior residents or visitors to the Ithaca Y could walk to.

The new revision presented this month changes the 10-duplex, 20-unit plan approved last year to ten triplexes with 30 apartments, and changes the roadway from a two-way street to one-way, allowing for a narrower road that accomodates the triplexes additional depth.

On May 10 a new proposal was presented that scales the project back to the original number of units, 12, but spread among four triplexes along a one-way road. Planning Board members worried about the project being funded if IDA monies are withdrawn, and about the exact status of an agreement the developer has with the Army Corps of Engineers to relocate a significant portion of the wetlands to Montezuma, NY.

With laborers lined up to start construction July 1st, a new plan was submitted to try to address the possibility that the Planning Board would rule the last plan a major change, because it went from 20 to 12 units. The plan considered June 25th is fairly close to the one considered two weeks prior, but adds two new triplexes to the mix, making a total of six buildings and 18 units. This reduced the change to 10%, which the planning board voted was a 'minor' change, paving the way for construction to begin the following week.
v15i19
Tweet