Architect and engineer Larry Fabroni asked the Lansing Town Planning Board Monday to recommend that the Town Board grant a waiver to the Village Solars, LLC Planned Development Area (PDA) that will allow them to postpone the construction of a community building for one year, pushing the completion date to the end of 2021.  Meanwhile the company would continue building apartment buildings.  It seemed like a simple request, but it sparked hours of debate both by the Planning Board and at the Town Board meeting last week.

"My problem is that this will be the third extension that we've given you," said Planning Board member Larry Sharpsteen. "That could cause the credibility of the Planning Board and the Town of Lansing to suffer, somewhat, with other developers, and also with your tenants and other residents of the Town.  You may legitimately have a reason for your request but it doesn't send a very good message to developers and residents of the town: just come to the Planning Board and ask for it and they'll all roll over and waive their legs in the air and you're good.  I think we want to see more of a commitment to having that community building underway."

A PDA is a zoning law that applies to a specific project or area in a municipality.  PDAs are very specific about what may or may not be allowed because they supersede the zoning that would have applied to the property.  For large projects it may specify stages of construction, or, as in this case, the order in which bildings must be completed before Certificates of Occupancy (COs) are issued for one building or another.  As such any changes to a PDA must be approved by the governing body, in this case, the Town Board.  At its July 17th meeting some Town Board members expressed discomfort with granting the waiver, and decided to refer the issue to the Planning Board, which cannot change the PDA, but may be asked to provide advice to the Town Board.

The Village Circle - Village Solars PDA was approved in 2017, the former being owned by Steve Lucente's father Rocco, and the Solars development owned by Steve.  When Rocco died last year the future of his half of the project was uncertain, but Steve's company is in negotiations to acquire it.  That prompted the request for the waiver -- if they can own the whole project they want to build a larger community building that is more centrally located for all tenants of both pieces of the PDA.  It would have more amenities, plus two upper floors of apartments in an arrangement similar to the City Center apartment building in Ithaca.

"The reason for that is this: Mr. Lucente, who is the other part of the PDA, passed away in 2018.it affords us the opportunity to acquire the rest of the PDA that you've approved, and possibly move the community building and make it much bigger facility to serve the whole PDA and make it more centrally located," he said.

The company Web site describes the project as, "The nicest and newest apartments in Ithaca, these Lawrence Fabroni II designs feature passive solar construction, open floor plans, high ceilings, radiant floors and extensive sound proofing - all with an emphasis on privacy. Our park-like grounds include trails, ponds and wetlands providing a natural, stimulating environment. Walking distance to the Cornell Business & Technology Park, the Village Solars are just a few minutes to shopping and all major services. Bus service is provided by TCAT Bus Route 37 with various inbound and outbound times. True 21st century housing, the Solars provide state-of-the-art features at a price you can afford."

Sharpsteen's concern echoed that of some of the Town Board members last week, who said that tenants who moved in when apartments first became available were expecting amenities such as a laundromat, restaurant, and other things planned for the community building.  They said delaying the building for another year would give them time to resolve the sale and potentially get through a lengthy process with the Planning Board because it would trigger a 'major change' to the PDA.  Fabroni said that they will still meet the deadline if that happens because the design phase of the community building would be designed concurrently with what might be a 9 month process of getting the 'major change' approved. 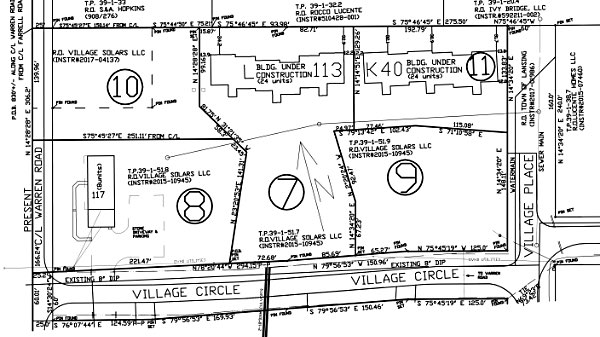 Lucente argued that his company has been including amenities including dog park, fountains with colored lights, walking paths, and WIFI, and no tenants have complained about the delayed community building.  Answering concerns about the nonexistent laundromat, the Lucentes said that only two tenants have not opted to pay a little more for a washer/dryer in their apartments, and inexpensive laundry machines are already available for those who don't opt for the machines.  Lucente also argued that his company has worked well with the Town.  He reminded board members that the quality of the buildings is quite high, and that his company has done everything it said it would do, and then some.

"It would be a real shame to miss the opportunity," he said. "It doesn't seem like too much to ask, especially with our record.  We have been on time and on budget.  We've done everything we said we're going to do.  My father passed away, and we're doing the best we possibly can.  I think we will succeed and the Town will be very happy with the result."

Fabroni spoke to the desirability of the apartments as evidenced by renters snatching them up as quickly as they can be built.

"As far as the desirability you spoke about for the people who live there, we moved 22 people in 24 units the day they were ready.  That's the kind of demand that we've seen," Fabroni said. "Building 113 is fully rented, and it just opened June 1st."

Fabroni specified two buildings the company wants to construct during the current construction season, in order to provide continuity for construction workers while the sale is settled one way or another.  It was presented as a practical solution to the problem of putting the community building on hold while the sale is worked out.  Lucente noted that no matter how he fares in acquiring the rest of the PDA property, there will be a community building by the end of 2021.

"I hope that you'll look at this like we are," Lucente told planning board members. " It's an opportunity to do a much better job for tenants, fr the Town and for ourselves.  If we are successful we will bring a new level of amenities to this project.  The taxes to the Town would increase.  If we lose you lose.  If we win, you win.  I don't see how the Town could possibly be hurt by granting us this request and end up exactly where we want to be in 2021."

After much discussion the Planning Board voted to recommend in favor of the waiver, but restricted construction on three planned buildings 117. 2, and 22.  The Town Board will likely vote on whether or not to grant the waiver at their August 21 meeting.