A Tale of Two Subdivisions At the Mall

Two developments came before the Village of Lansing Planning Board Tuesday that are asking for special subdivisions that would require no space between lots.  One is the Lansing Meadows (mall 55 and older housing) project that has had increasingly contentious dealings with the Planning Board over close to a decade.  That developer is asking for two changes to village regulations that would decrease the minimum lot size and frontage requirements in order to make subdivision of 18 triplex units (six buildings) possible.  The other is the Shops at Ithaca Mall itself, where the owner seeks to sell anchor stores to current or potential tenants, and a lot outside the mall for an extended stay hotel.

The plan for the Shops at Ithaca Mall is to subdivide mostly anchor store spaces, not counting what remains of the mall once the large stores are sold. Target already owns its store, and BJ's Wholesale Club is not owned by the mall owner. Parcels that would go up for sale include Regal Cinemas; Michael's; the south end of the mall that contains Dick's, DSW, ultra Beauty, and Best Buy; and a lot behind the Clarion Hotel that is being considered for an extended-stay hotel.  A bonus is that Graham Road from Triphammer to BJ's Wholesale Club plus a portion of the ring road in front of the mall will be dedicated to the Village as part of the subdivision, something Village officials have wanted for a long time in order to resolve pothole and sidewalk issues there.

The Planning Board and Village Engineer Brent Cross had asked for resolution of issues with stormwater drainage and sanitary sewer.  Of special concern is stormwater pipe that runs beneath the mall building, that Village officials suspect is clogged or broken.  Attorney Michael J. Gavin, representing mall owners Namdar Realty Group and Mason Asset Management, said he had provided a contract for relining the stormwater pipe with epoxy, and said a video was provided to Code Enforcement Officer Michael Scott.  he said some stone has washed into the pipe, but they are not causing clogging.  he said mall officials are getting a quote to have the stones removed.

Gavin reported on attempts to inspect sewer lines with television cameras to identify he said is an isolated problem related to waste coming from the pizza shop in the food court.  he said there are no other issues.  When asked about the issue of separate water meters for each parcel to be subdivided he replied that each store already has its own water meter.  He and Village officials have been and plan to continue meeting to resolve issues the Planning Board has raised, so the project can move forward as quickly as possible.

That informal discussion seemed congenial and productive, in stark contrast to the Lansing Meadows public hearing continuation, which lasted well over an hour, rehashing issues and misunderstandings that have been argued over for several months.  Arrowhead Ventures developer Eric Goetzmann is asking for two changes to his Planned Development Area (PDA) that he considers minor and says has no impact on the density of the development or even what can be built there.

Goetzmann is asking the Trustees to allow smaller than usual lot sizes and road frontages because the townhouses would each have a different owner, but are physically attached.  The allowable lot size would be reduced from 10,000 square feet to 2,600 because of the size of the smallest unit in the already constricted triplexes.  The amount of road frontage would have also to be reduced, as well as allowing zero space between parcels because the triplex units actually share dividing walls.

"There are two reasons for that. One is trying to get individual water meters on each parcel. Going through this process, we learned that that can only have one water meter per tax parcel. And two, in the event, which we've had a number of discussions over the years that at some point these might either be for sale or for rent. We need a subdivision in a separate parcel for that," Goetzmann explained. 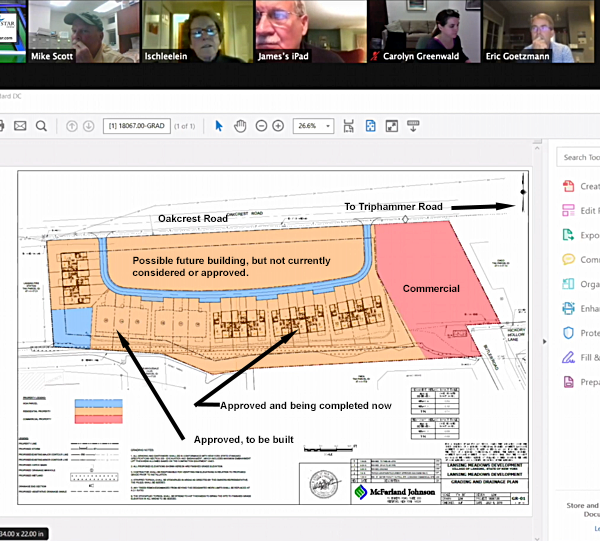 But Planning Board members (as well as the Board of Trustees in their meeting last week) continue to demand plans for a full build-out of the property, which in addition to two more triplexes that have already been approved, could mean an additional four triplexes at some point in the future.  There have been so many changes and requests over the last decade that Planning Board members were confused as to which plans they were being asked to consider.

Goetzmann and Arrowhead Ventures Construction Manager Jim Bold have argued that the changes should be considered minor rather than major, which would involve less time as winter approaches and threatens to curtail this building season.  While the changes would not require physical changes to the existing four buildings, the will make a difference in how utility pipes are placed and stormwater management.

"We're coming into winter conditions, so we'd like to do this," Goetzmann said. "It doesn't change what we can or can't build on. That's the piece I don't understand about this."

Trustees and Planning Board members have long argued that they are concerned about how decisions they make today will impact further development in the Village.  They have repeatedly asked for a plan showing a full buildout. but Goetzmann and Bold have said that the market would drive future development, if any, so it is not possible to provide a firm plan for something that may not happen or could be quite different depending on future market conditions.  But they have repeatedly argued that if more development of the property is proposed at some point in the future, it would have to go before the Planning Board for approval.

At one point Tuesday Bold asked Planning Board members to articulate what they would have to do to make board members comfortable with making a recommendation that will move the project forward.  He said they already have plans that show a possible build-out inside the ring road, but reiterated that as of now there is no plan to build on that portion of the parcel, and the board should act on the two changes to the PDA as it stands today.  He also reminded the Board that they would have final say if the Goetzmann approaches them with a plan in the future.  But he said it is unreasonable for them to refuse the conditions needed to subdivide the already-approved existing project based on a hypothetical future build-out that may or may not conform to the potential plan that had been provided at past planning board meetings to show what a build-out could look like.

"The developer is not going to give up the right for further development in exchange for a subdivision.  It's too limiting to the value of the property as an investment.  I don't know what will make the board feel comfortable more than what we've already provided.  If you can articulate for me what it is you want then we can react to it."

Trustee Pat O'Roarke suggested that the issues could be resolved faster if the Planning Board and Board of trustees were to have a joint meeting, possibly as soon as next Monday.  As that idea gained traction planning board member Michael baker asked Village Attorney William Troy whether that is allowed under accepted procedure.  Troy said it is a good idea that may save the time needed to have multiple meetings and taking time to draft a recommendation that he said should be viewed for comment by all planning board members in a scheduled public meeting.

"Everyone can speak their mind and nothing gets lost in translation," he said.

Scott said he would confer with the Village Clerk to set up a joint meeting.