The Ithaca Forest Preschool Web site tells parents, "At Ithaca Forest Preschool, we believe the best time to start connecting with nature is in early childhood, when the mind is absorbent and brain and behavior patterns are first being established.  This is child-centered, child-directed experiential education that leads to deep nature connection."  All well and good, but a simpler way of saying that is that kids should play outside, and they love doing it.

"As a mother of a pre-schooler I am concerned about how hard it is to get my kid outside," says Forest Preschool Lead Instructor Melissa Blake.  He has so many great toys to play with and the whole screen-time issue is already coming up for us even though we swore we were going to limit his screen-time until he was five.  The more time they spend outside the more they want to go out."

With plans to offer a Spring session five days a week, the outdoor preschool is unique in Ithaca.  The pre-school serves children aged 3 to 5 for three hours in the morning.  Parents don't have to commit to all five days.  They can choose which days in the week they want in advance.  While the school has an indoor space it can use, Blake says it has had more outside-time than even she thought they would be able to given the unusually cold winter. 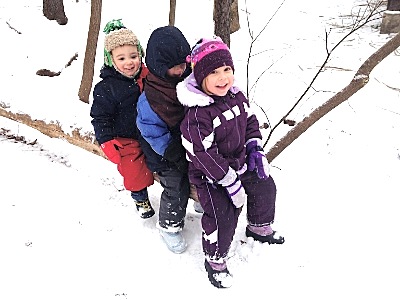 "Our location at 4-H acres is a wonderful ten acres of natural woods," Blake says.  "We're outside the vast majority of the time, but we do have a building with heat and electricity which we can use.  We used it a few times this winter, but we found that once the parents know how to dress their children we were surprised at how much time we could actually spend outside.  So some of those mornings when it started out at 11 below we started in the building.  At 10:30 in the morning we were able to go out for a half hour to 45 minutes, then finish in the building.  So we have a lot of flexibility."

The child to teacher ratio is, at most, five to one.  So far kids have come to the school from around Tompkins County and Cortland.  Blake says some day she would like to expand the school, creating satellite programs in other areas of the county.  Each session starts with an opening circle, then activities, stories and songs revolve around the theme for that day.  Games and activities are designed with these themes in mind, which may include tracking, trees, fire, or taking care of wildlife.

"We get to play a lot and watch them play a lot," Blake says.  "What I enjoy about that is it is a kind of teaching that's very in the moment.  It's very improvisational.  You have broad themes in mind, and you have a large toolbox to draw from.  But in any given moment you survey the scene and see what the group is gravitating towards.  How can I get them curious and keep them curious?  It's constantly changing.  You have to stay on your toes."

The popular Primitive Pursuits program was started 15 years ago as a 4-H after school program.  Since then it has grown into a wider nature program that even offers workshops for adults.  With the addition of the preschool the program serves all ages from 3 years old up.  The program contracts with other entities including Youth Services across the county to offer programs on being and surviving outdoors.  It also offers a program for home schoolers.  Ithaca Forest Preschool is the newest program Primitive Pursuits offers.

"A year ago I called them up and asked how I could make this preschool thing happen," she recalls.  "They said 'Oh we're glad you called.  We were just talking about asking you to start a preschool program with us.'  So it was meant to be." 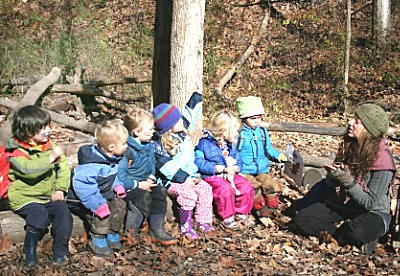 The summer program drew children who were enrolled in public preschools but wanted a program for their children in the summer.  Some of those parents asked for a program during the public schools' spring break, which prompted the idea.  About a week ago a Winter Break Camp was offered, and a Spring Break Camp is upcoming.  The Primitive Pursuits the summer version of Ithaca Forest Preschool summer camp is called Growing Wild.

The popularity of the outdoor preschool has caused it to grow quickly.  Parents may try it for a day or two per week, then later ask for more.

"They're adding days," she says.  "They'll sign up for one day and then ask, do you still have space on the other days?'  The kids don't want to leave.  They're very enthusiastic."

Blake says that unstructured time in nature is being recognized as important for children's cognitive development.

"So this is a movement," she says.  "In this country 'forest preschool' is becoming a common term.  It's their natural habitat.  We learn a lot from the children.  I love that, too."