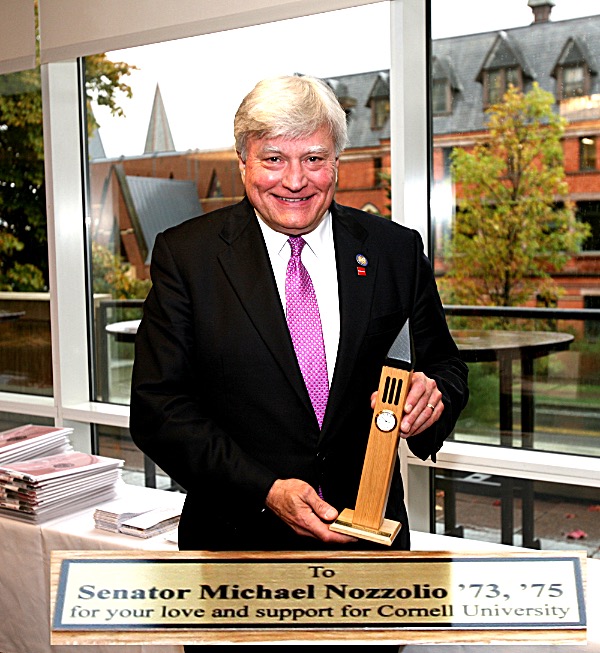 During the ceremony, Cornell President Hunter Rawlings, on behalf of the Cornell Board of Trustees, presented Nozzolio with a replica of the McGraw Clock Tower, an iconic symbol of the University.

"Senator Nozzolio has been a tremendous intermediary between Cornell University and the state of New York during his more than three decades in the New York State Legislature," continued President Rawlings.  "Senator Nozzolio has prided himself on his record of public service and he understands what it means to serve the public."

Nozzolio graduated from the Cornell School of Industrial and Labor Relations in 1973 and earned a Master of Science Degree from the Cornell Graduate School majoring in Agricultural Economics in 1977.

Previously, Nozzolio was the recipient of the Alpern Award from the ILR School, and the Alumni of the Year Award from the College of Agriculture, two of the highest honors that can be awarded to a Cornell alumnus.

Nozzolio said his time at Cornell was one of the main reasons he was able to serve the people of his District so successfully.

"My interactions with Dean Catherwood, as well as numerous other faculty members and advisors, helped to set the foundation for a life of public service.  The education I received at Cornell University went far beyond the classroom," said Senator Nozzolio, "it gave me the confidence to push far beyond what I believed I was capable of achieving in my life," concluded Senator Nozzolio.

Kathryn Boor, Dean of the College of Agriculture and Life Sciences, said it was a "bittersweet day" for her and the Cornell community because of Senator Nozzolio's impending retirement, adding that the Senator "has been a true, steadfast friend and steadfast supporter" of the University throughout his career.

"We are pleased that Senator Nozzolio has agreed to serve on the College of Agriculture and Life Sciences (CALS) Advisory Council after he retires," said Dean Boor, "so his involvement with Cornell will continue into the future."