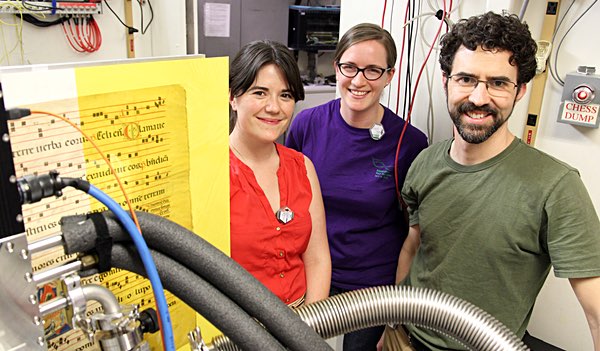 From left, Ruth Mullett, Louisa Smieska and Arthur Woll at CHESS with one of the manuscript fragments mounted to be scanned. Photo by Cornell University

Analyzing pigments in medieval illuminated manuscript pages at the Cornell High Energy Synchrotron Source (CHESS) is opening up some new areas of research bridging the arts and sciences.

The team was surprised to find the trace element barium present in the azurite blues in many of the leaves. "We called it 'the barium question,'" said Smieska, a former postdoc at CHESS and current Andrew W. Mellon Postdoctoral Fellow in the Department of Scientific Research at the Metropolitan Museum of Art in New York City. "At first it took a little while to convince everybody why I was so excited that barium was present and why it could be significant. Then we saw the maps and started seeing why; barium was there in every azurite blue we studied."

Identifying which trace elements are present and in what amounts can give a unique fingerprint to a pigment, which may help link scattered pages in different collections. The impurities and trace elements are also potentially significant indicators of where the pigments originated, and can aid in other historic and scientific inquiries.

XRF measures X-rays emitted by atoms to probe the chemical elements present in an object. The p-XRF survey found interesting mineral impurities in a common blue pigment made from the copper mineral azurite. The team then selected seven of the most interesting fragments to study, using the more powerful facilities at CHESS.

They chose examples to study at CHESS "based on the range of geographical and historical time periods they represented and those that yielded unusual or surprising results in the p-XRF survey," said Mullet, who is a fellow in the Fragmentarium project based at the University of Fribourg in Switzerland, which is building a database of fragments from different institutions.

"We looked at the range of pigments on a particular leaf. We did comparative work on a historiated initial – one of the larger in-filled initials on a page – that had some blue in it, and smaller initials that had a different kind of blue pigment," and examined fragments with "more than one blue or one red in a page."

Fragments until recently have received little scholarly attention but have much to offer manuscript studies, Mullett believes: "Research like ours may make it possible, for example, to narrow the geographic region of production by identifying unusual pigments in a palette."

Pigment analysis can help in provenance research to link far-flung manuscript pages and even reconcile them to their original book sources. Additional benefits for conservators, historians, geologists and others include "the potential to learn more about trade routes, historic mining sites, and the regional use of pigments and ingredients," Mullett said.

Cornell's collection of illuminated pages spans the 9th to the 16th centuries. Such fragments are flat and more conducive to imaging tools than complete volumes, Ferri said.

"Fragments are great because you can document or cover more topics, styles, techniques and periods with 50 fragments from different books, as opposed to one book made by a few people in one region over a few years," he said.

Their research, published this summer in the journal Applied Physics A, was co-authored by Laurent Ferri, RMC's curator of pre-1800 collections, and CHESS scientist Arthur Woll.