A public hearing was held at Ithaca High School's Kulp Auditorium Wednesday to gather input on whether the enrollment cap for the New Roots Charter School should be lowered from 225 to 200 students.  The Ithaca Board of Education held the hearing because the charter high school is within the boundaries of the Ithaca School District.  42 people spoke at the hearing with 35 of them speaking in favor of the change and in support of the school, including New Roots students.

"It's a minor change," says New Roots Principal Tina Nilsen-Hodges.  "It's actually a change downward, which means there will be fewer total students that we will be billing area districts for. In that respect the cap is beneficial to other school districts."

The charter school opened in Ithaca's historic Clinton House three years ago with freshman and sophomore classes.  As student progressed junior and senior classes were added, and this year the school expanded into classroom space at the State Theatre.  This school year is the first year the school has had all four classes, and it's first commencement is scheduled for later this month.

School districts where students live are required to pay 'tuition' to charter schools those residents attend.  That has been the root of contention for some Tompkins County residents and local school officials who say the tuition is a financial drain that hurts students in their schools.  But New Roots supporters say that school systems can't be all things to all students, and the school fills a need for students who would not otherwise succeed in their home districts.

New Roots officials say they are requesting the change in the charter because their space limits the number of students they can safely accommodate to 200.

Seven speakers opposed the change, including a speaker whospoke in behalf of the 'Coalition for Sustainable Schools' that is led by Pat Ehrich.  The coalition has been relentless in its opposition to the school.  Nilsen-Hodges says the coalition is really comprised of Ehrich and one other person who has not been as active in the fight against the school this year.

"I think there are other people who are sympathetic, but it's been a pretty focussed effort on the part of one person," Nilsen-Hodges says.  "I continue to be dismayed by the ways in which our anti-charter school organizers use information to present the school in one light.  They are selective in the information that they use.  I'd like to respond point by point to the presentation made by the community group who have been actively organizing first to prevent the school from opening, and now are working throughout this time to detract from the school."

But not all speakers against the change had that agenda.  Melissa Smith, whose four children attend Ithaca schools, challenged the reason for the change, saying that low enrollment is the real reason for the request.  New Roots currently has 175 students.

"I question the reason behind the charter change request," Melissa Smith. "If they haven't had to turn any students away then the school is not really bursting at the seams.  I don't think the space really is the limiter.  I think that under-enrollment is the issue, and really not the space.  I oppose the change in the charter request." 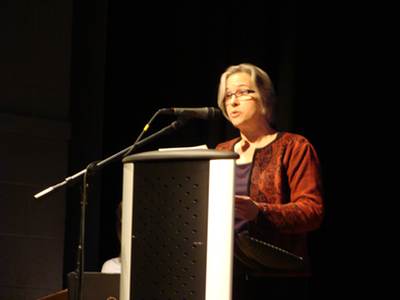 Nilsen-Hodges said she is gratified with the support, particularly of students who came to speak in favor of their school.  She said that state law sets up an adversary relationship between charter schools and municipal districts.

"The major issue at work here are problems that I see in New York State charter law that requires charter schools established by the state to bill school districts for 'tuition' payments for students who live in their districts to attend the school," she says.  "There are many states where the state education departments provide funds directly to charter schools.  I think that sets up a much better relationship between the charter school and the district schools because there isn't a perceived zero sum gain where the charter school wins and the other schools lose.  That is a really unfortunate dynamic, and I think it is in play at fueling people's distress."

New Roots is chartered by the SUNY Board of Trustees.  Charter schools are reviewed every five years, and schools that do not perform are dissolved.  New Roots is up for its first review in two years.  Changes in the charter are subject to a public hearing before the chartering organization rules on whether to accept them.