U.S. Congressman Tom Reed visited the Boiceville Cottages community in Caroline Wednesday to listen to concerns from local builders and tour the innovative development.  A group of local contractors, builders, engineers, and suppliers gathered in the Boiceville community meeting house to visit with Reed, after which he was given a tour of the development, including a job site on which the final 17 cottages are under construction.  After the tour Reed sat down to hear about concerns and initiatives the local building industry wants his help with.

"You put a lot of people to work and bring value to the economy," Reed said.  "We want to make sure we get our tax code done correcting.  Things like the low income housing tax credit, which we were able to pass on the last extenders package on a permanent basis.  We've had some big successes in 2015.  In that extenders package we talk about things like allowing you to take those deductions for capital equipment, and immediately deduct it.  It gives you the cash to invest in the business so you can grow the next project.  That's a big piece of policy that was elusive for decades, and we got it done permanently."

Boiceville Cottages owner and developer Bruno Schickel said that regulations that are too strict or expensive squelch new ideas before they get off the drawibng board.  He told Reed about some of the hurtles he had to clear when he began building Boiceville in 1996.

"The regulations that get layered on prevent innovation and stifle the creativity of the private sector," he said.  "There is no way I could have built this anywhere in Tompkins County with the exception of Caroline, which has no zoning.  So the book was much more open to come in and do something.  It took only two meetings with the Town of Caroline to approve 75 houses.  Seriously, in another community it would have taken two years.  Now this is a model that can be emulated.  I get calls from people all over the country asking, 'How can we do something like this?"

When the final 17 rental houses are completed there will be 140 small and tiny cottages that house a total of about 350 people.  The expansive, charming community features small groupings of houses the design of which was based on Barbara Cooney illustrations in 'Miss Rumphius,' a children's book he read to his daughters when they were growing up.

The average two-bedroom house is about 900 square feet, in groupings of three houses to encourage community.   Smaller ones with about half that living area are grouped in settings of four.  There are also studio apartments, though they are not the typical one room and bathroom you might find elsewhere.  Each has an upstairs bedroom.  Each small home has a loft that can be used as a bedroom or for storage.  Schickel says the typical home can be heated for about $300 per year, with an average utility bill of about $95 per month.  He has also provided a playground, garden boxes, dog parks, and a community meeting house.

Normally you would need an acre per home to allow for adequate septic systems, but because Shickel is the sole owner he was able to group houses, using common wells and about one septic system for every nine houses.  NYSEG would not supply natural gas to the site due to its an infrastructure that would not handle more gas customers, so he was forced to use propane to fuel small gas fireplaces that are so efficient that they heat an entire cottage.  He said he started building the community at the time of the real estate crash, which allowed him to keep his employees working during that lean time.

Reed said he wants to talk to builders who are part of a core piece of economic data that is used in Congress in crafting tax reform legislation, to make an easier and more reliable environment for contractors and building companies to create jobs. 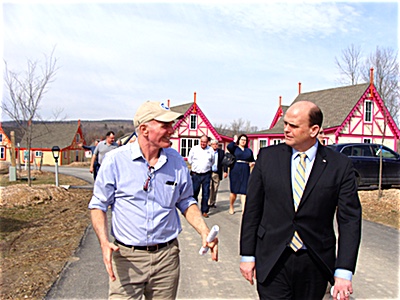 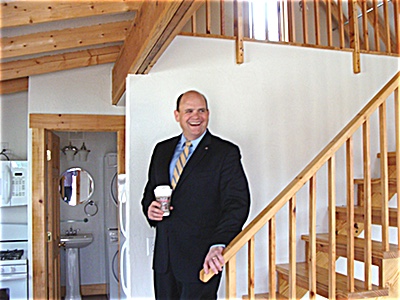 "Your skill is something that I applaud," he said.  "I have heard from home builders across the country that we need more of you.  The skills you you use to put up these houses is something we need across the country.  These are good, solid jobs that provide an opportunity for generations to come.  Whatever you are doing I want you to know we support it 100%.  And anything we can do for the next generation to get those skills, we want to be part of those efforts to bring attention to it, promote it and pass it on."

Many of those present were members of the National Association of Home Builders (NAHB).  Schickel said that he and other NAHB members regularly visit Washington to lobby on building trade issues, but he wanted to Bring Reed to a working job site in his district so he could see the challenges first hand.

"We're trying to bring permanency," Reed said.  "That's one of my goals, to do the best I can to make the rules permanent, so you guys can  rely on the policies rather than to have to wait until the next minute to see if Congress is going to extend it or fix it or do whatever they're going to do to it.  We'll see what they do in the next administration."

"The Congressman has become one of NAHB's go-to guys on property rights," said NAHB member Bruce Boncke.  "He's really come through for us on property rights.  These things don't happen without underlying property rights and the willingness to fight for them and the understanding of local and federal representatives to do that."

After the site tour Reed spent time chatting with builders about regulations, mandates and costs that prevent some projects from ever being built.  One developer told Reed about an incident that killed a project before it even got started.

"I tried to build a mixed use residential retail commercial building and I needed more residential units to make the economics work for lending," he said.  "I wanted six more apartments and the Town of Ithaca wanted an environmental impact statement.  the deal with these impact statements is that you pay an expert $20,000 so he can produce a 50 page report.  They look at it and read it and if they don't like it they want to hire their own expert and they make the developer pay for it.  I backed out right away.  I pulled the plug and walked out of the meeting."

"These are the stories we bring back to Washington to say this regulation or decision may sound great on paper," Reed said.  "And I've heard story after story about how the banks are there under this new environment after you establish that you really don't need them any more.  I am glad to be here to have a conversation with you about what you're doing here at Boiceville, but also with our home builders and the builders who actually put their sweat and equity into these buildings." 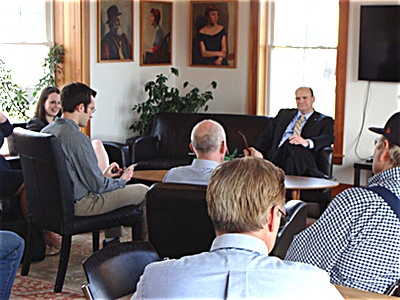 Once the final Boiceville Cottages are completed Schickel plans conventionally sized homes in Lansing.  He purchased the proposed 21 home Farm Pond Circle development,off of Peruville Road after developer Jack Jensen, who conceived of the project and had begun building, passed away.