The entrance to the spit of land at Myers Point has boat racks where you can lock and store your kayak, canoe, or small sailboat.  This summer two new racks have appeared, part of a new business located in the concessions building in Lansing's Myers Park.  Paddle-N-More will be renting kayaks, canoes and stand-up paddle boards, and offering classes in paddling.

"I think it's a great location," says owner Jennifer Miller.  "Last summer I thought, 'this is the perfect location for a rental shop.'  I asked (Park Superintendent) Steve Colt, 'Are those rentals?'  He said, 'No, but that's not a bad idea.'  So I said, 'Let's talk soon.'"

They did, and Paddle-N-More opened in the park concession building last Saturday.  18 kayaks and 5 canoes are available for rent.  10 stand-up paddle boards will be available at the end of May.  In June starter classes for kayaking and canoeing will be offered, and Miller says she plans to offer Sunday 'free family paddles' that will be like an open house where families can try out paddling.  Eventually start up, intermediate , and advanced kayak lessons will be offered.  Advanced lessons will include 'rolling' where you roll the kayak all the way around, going under water, and continuing until you are upright again.

Miller has paddling in her blood.  Her father was a white water canoe sportsman, and the family lived at an eagle scout camp right after she was born, so she began canoeing as an infant.  She grew up in nearby Venice Center, NY.  She earned a bachelor's and master's degrees in recreation with an emphasis in outdoor and environmental education at SUNY Cortland.

"There are people who just want to go out and enjoy a little paddle without getting wet," she says.  "And then you have more hard core people who want to learn to roll their kayak.  The more people we get out paddling and being active, that's what is important to me.  My research at SUNY Cortland has a lot to do with children and adults who are inactive.  Research is showing that children who are born today have a shorter life expectancy than their parents.  Scary, huh?" 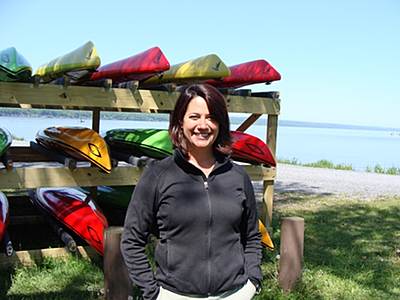 She has worked at Cornell University and eCornell for several years.  But her office job was not satisfying to someone who says she is an outdoors person at heart.

"Three years ago I was standing in the kitchen in the eCornell office, and we had a really nice view of the lake," she says.  "I was looking out, watching the sail boats on the water and telling myself, 'This is not where I want to be.  I want to be down there.'  I started researching the recreation program, and decided it was time to change my career."

She took a part time graduate assistantship at SUNY Cortland working on the Community Bike Project, which refurbishes used bikes to be used by students on campus.  She also taught mountain biking and backpacking.  Last summer she headed a paddling adventure camp through the Lansing Parks and Recreation Department.  The first camp was a nature camp for ages 6 - 10.  She also taught a challenge camp for ages 10 to 14 which included a day of canoeing.

Miller took up kayaking five years ago.  When she decided to open her business she travelled to Jacksonville, Florida last January to become certified as a American Canoe Association instructor.  While there she picked the brains of fellow students who already own their own kayak/canoe rental businesses.

"Canoeing was always part of my life.," she says.  "I love the outdoors and I love leading trips that I do for SUNY Cortland, but it takes me away.  I really wanted something I could do here.  I started researching kayak liveries and rental businesses."

Currently Miller has four employees including her assistant director Kevin Morris.  Morris has been working on developing policies and procedures and guided trip information.  The others are high school students including Miller's niece Mackenzie and her own children Andrew and Abigail.

Miller plans to build her business in stages.  This month the business will concentrate on getting the rental business on its feet.  Next month she plans to add classes, and later guided trips.  More of her staff will be trained this summer to become certified American Canoe Association instructors.

"We're making sure we have the appropriate licenses, and that all our Is are dotted and Ts are crossed," she says.

This summer she is teaming with Finger Lakes Paddleboard to offer Stand Up Paddleboard (SUP) Yoga.  SUP Yoga began in Hawaii in the 1960s, and over the past decade it has become popular around the country.  Participants find their center of gravity, practicing yoga poses while balancing on a paddle board.

She is also teaming with a Syracuse business to offer corporate team building paddling trips.   Next year Miller plans to offer over night paddling/camping trips, and even winter kayaking trips in southern locations.  Some time in the future she hopes to open an outfitter store at which she will sell kayaks, canoes, and outdoor equipment, and possibly winter sporting equipment like snow shoes and skis.

But for now the focus is on rentals and classes at Myers Park.  She has been renovating the concessions building for use as a paddle shop, and had two racks built, based on Michael Cole's Eagle Scout project that is now a public boat stand at the park.  The shop opened Saturday, and she is planning a grand opening June 23rd.

The paddle shop will be open from 2pm to 8pm on weekdays and 9am to 8pm on weekends.  The last rentals will go out at 6pm.  Kayaks and canoes will be renterd for $24 for two hours and $8 for each additional hour.  Miller plans to stay open through October.  Next year she hopes to open part time in March.

"The biggest thing I want to see is people trying kayaking who have never done it before," Miller says.  "That's one reason I decided to do this.  I know there are a lot of people who bring their kayaks here.  When I tell them what I am doing they say, 'Oh cool, I can bring my friends now and they can rent your kayak, and we can go out together'."