Green Square Developers David Taub and Graham Gillespie brought a team to Lansing Tuesday to present their vision for a town center on the 153 acres of town land across from the Town Hall and ballfields on Route 34.  As presented the project could mean over 60 housing units including two-bedroom single storey patio home duplexes and three bedroom, three storey townhouses, as well as 23,000 square feet of retail shops.  The four-phase plan is in response to a Request For Proposals (RFP) the Town of Lansing sent to developers last year.

"The Town of Lansing has an opportunity here because you happen to have a giant parcel in the heart of your town," Taub said.  "As developers we have to know that demand is there before we put up this housing.  And now it's there.  The timing is perfect. Now is the time for the Town to attract developers to realize this vision."

Taub said he has been in contact with other developers who have an interest in bilding on the property, and that other developments may dovetail with the Green Square plan.  RFP Committee Chair Daniel Adinolfi noted that four developers have expressed interest in building here.  In addition to Green Square Development, Cornerstone (a Rochester Firm) and Calimar (with offices in the US and Canada) are interested in building senior housing.  The Green Square proposal also shows a subsidized cottage style homes development proposed by NRP Group with plenty of acreage left for other developments, recreational land and wetlands.

As presented Phase 1 will include 30 units completed over an estimated five year period.  They include ten duplex patio homes and ten town houses.  Phase two would include a retail area along Route 34 with parking and walking areas.  The plan proposes two storey buildings with retail space for about ten businesses at street level, and business and/or apartment space upstairs.  Phase three would add 15 more duplexes to the north of the Phase 1 homes.  A final phase would add recreation and civic areas.

Taub said the market could accelerate that timetable or slow it down, and would also determine whether cottage style homes remain at two bedrooms or are expanded to three.  He also said that if demand is strong that Phase three could supersede Phase two, pushing the retail center back even further.  But he added that whenever retail tenants are interested, he will build the retail units. 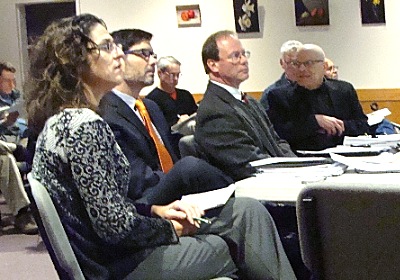 "We started from the Town Center study of 2010 and the concepts that were developed from that study," said Gillespie.  "The RFP was written with a lot of those ideas in mind.  We took a look at the sight itself, and one of the precepts that we want to emphasize is to keep what's working there.  The trail system and the wetlands -- let's work with what we have there and build a development that respects those attributes."

RFP Committee Chair Daniel Adinolfi noted that four developers have expressed interest to date.  In addition to Green Square Development, Cornerstone (a Rochester Firm) and Calimar (with offices in the US and Canada) are interested in building senior housing.

"During our meetings we discussed what the Town Center needs to be, what it shouldn't be, how it fits into the comprehensive plan," Adinolfi said.  "We wanted to see it that's practical.  There have been some changes since the proposal, sewer being one of the big changes."

The failure of the Town to implement a municipal sewer presents a significant challenge.  Taub said that developers may pay for a package plant, a small sewage treatment facility that would service the Town Center area only.  But who performs ongoing maintenance and operation of the plant is a stumbling block because developers are not in the business of running municipal services.  He said that less dense development resulting from using some of the land for shared septic systems is also possible if a package plant can't be achieved.

But that is a catch 22 for a town center.  Businesses will only be attracted to the area if there is enough residential density to provide enough customers to sustain them.  Denser housing is needed to reach that threshold.  Taub was optimistic that there will be a market for the modest duplexes and townhouses.

"We know that when you put a two bedroom apartment on Craig's List, within two days it's taken," Taub said.  "People don't want to go anywhere near the city of Ithaca.  The costs are outrageous.  They're driven entirely by the college and the university.  A young professional person can not afford those rents." 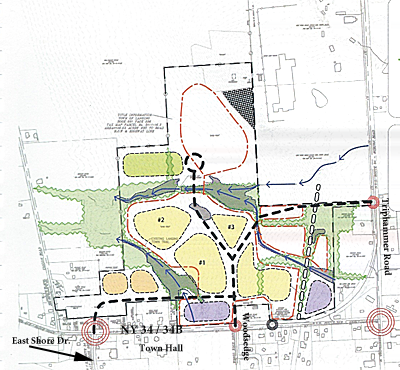 Taub estimated that Phase 1 of the Green Square project alone would generate over $170,000 in taxes for the Town, School and Fire Districts and Library, plus an additional $50,000 for the County.

He also pitched the project as a unique opportunity for the Town, saying that it will relieve a tax burden that is threatening to force families to sell homes they have lived in for generations.

"If you take our project, all three phases, and assume there are three more projects of similar size, in today's dollars when that's all done you're looking at over a million and a half dollars of taxes to the Town annually," Taub said.  "That's going to be great for everybody."

He added that now is the time to offer this kind of real estate.  He said that 'baby boomers' are of the age where they will soon glut the market because with their children grown they will want to sell their homes and move to more modest accommodations.   He said that building these modest, affordable homes before that glut makes this the perfect time to put them on the market.

"What must be done is to make certain that there is no challenge here that is insurmountable," Taub said.  "To some extent, I suppose, if anyone would say anything it might be the sewer or the infrastructure.  I don't believe it is.  That's what we will do: meet these challenges and as a cooperative group come up with a solution that everyone will benefit from."