You would think that fixing chronically flooding areas would be simple: hire an engineer to come up with a plan and implement it.  But Highway Department officials met resistance from residents this week, even to the extreme of Deputy Sheriffs appearing at Lansing Highway Superintendent Jack French's and Deputy Superintendent Charlie Purcell's homes to arrest them for trespassing on a property in the Autumn Ridge neighborhood.  Email sent to French by homeowners revealed a contentious neighborhood, half of whom want flood mitigation, and the other half opposing it.

"They don't have water in their basement and they don't care about their neighbors," French told the Board.  "One complained his trees wouldn't get water in his back yard.  He sent legal notice by UPS that if his trees die and one falls on his house he will sue the Town.  Another woman sent the Sheriff to my house and my deputy's house to have us and everybody else who was there that night arrested for walking on her property." 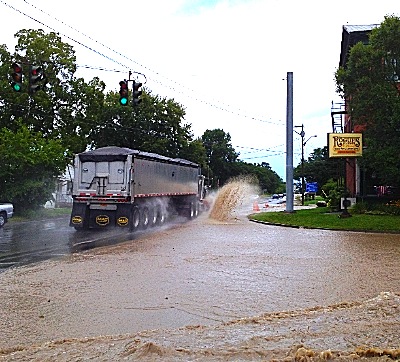 
French met with neighbors and walked some of the properties last Thursday with Purcell and Dake.  He said about half the houses had water in their basements, and water washing across the roads there.  He said a ditch on private properties on the east side of the neighborhood has been modified by property owners who removed a berm, or dumped yard waste in the ditch, or planted trees too close to the ditch.

He said that John Young and Steven Stahl offered land east of Autumn Ridge, where a parallel ditch could be dug to alleviate part of the problems.  French gave the Board copies of 35 email messages from neighbors in which half said they do want the new ditch and the other half do not.

Town Attorney Guy Krogh explained there has been a lot of rancor over storm water problems at Autumn Ridge for many years.  He said a lot of people have invested in ditches and stone weirs, and that other neighbors accuse them of causing flooding on their properties.  But he said French and other Town officials have the legal right to go on private property to respond to emergencies, including floods.

"There have been individual and group lawsuits threatening back and forth in that neighborhood for years," Krogh said.  "Being upset sometimes makes people forget what being a good neighbor means.  A flood is considered an emergency.  A surveyor, for example, has a legal right to enter on property even if the landowner says no, as long as they make a reasonable attempt to give notice. Surveying for purposes like this is considered in the public interest of the people of the State of New York by statute.  There is a law that says you can do it."

After talking with deputies neither French nor Purcell was arrested. 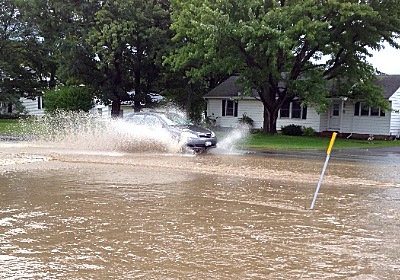 The other major Lansing problem area was on Waterwagon Road, where water races down the hill, flooding across East Shore Drive, which is owned by the State.  French says that any solution will have to be in concert with Tompkins County because a lot of the water comes from Triphammer Road, which is owned by the County.

"I went down there and thankfully there was a ton of town presence there to deal with it," said Krogh.  "It was dangerous.  I wouldn't have been shocked if I had heard that somebody died.  The roads getting cut, the pipes getting thrown across the road.  people had six or seven foot deep ditches between their driveway and the road.  They were trapped.  They had no way to get away from their houses.  There's a public safety issue there."

French added that highway department personnel were on hand early the next morning to help about a half dozen homeowners get out of their driveways so they could go to work.  He said that two 20 foot long, four feet in diameter culvert pipes were carried away in the flood and not found until the day after the storm.

Councilman Ed LaVigne asked how fixing the flooding would impact private property owners.  Krogh replied that the Board will have to decide whether it is a public project or a private one.  If public, he said that landowners who do not want to grant easements could lose portions of their property to eminent domain.  But he warned that if the Town acknowledges and addresses flooding it could be liable for damages after measures are taken.  If the Town does nothing he said it could not be held liable.

"It goes back to old British common law, literally from the 1200s," Krogh explained.  "When you alter the water flow or a water course, if you concentrate or change the direction of flow of that water in such a way as to damage your neighbor's land you are liable for a form of trespassing." 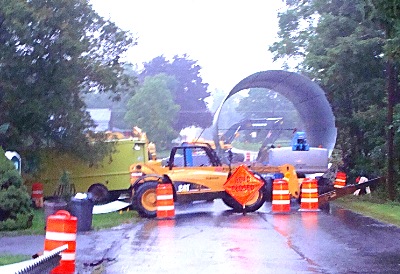 Autumn Ridge and Waterwagon Road are not the only areas where storm water is being addressed in Lansing. A massive culvert is being assembled on Triphammer Terrace. Highway Superintendent Jack French says the pipe will be lowered into an enormous ditch Tuesday or Wednesday of next week.

French said that John Young, who owns property on both sides of Waterwagon Road, has offered to donate property to mitigate storm water flooding, but board members noted that could only be part of the solution, because the water is coming from an area uphill of possible retention pond locations.  He said some plan needs to be implemented because current solutions are not working.

"We really can't dig those ditches any deeper than they are already," French said.  "You could bury a car in them very easily.  And you can't make the culverts any bigger than they are either -- they're four foot culverts now.  We've got to slow the water down somehow and find a place for it." 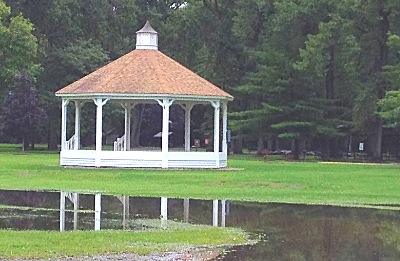 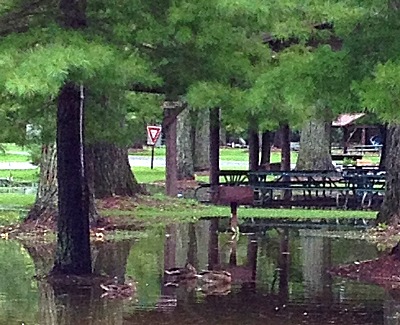 Supervisor Kathy Miller said that a proposal from Town Engineer David Herrick of TG Miller Engineers estimated that a preliminary study of the Autumn Ridge area would cost $7,500 or less.  The study would identify current conditions that create flooding issues there and propose mitigation measures.

"We've got Waterwagon Road back to as normal as it's going to be for now.  It's up to the Board whether we hire engineers to come up with a plan to address the numerous flooding problems we've had there in the past five or six years.  Many times when we get heavy rains it washes out the entire road and driveways.  We really need to come up with some sort of plan."

"I think we ought to go forward with that," said Councilman Doug Dake.  "I've seen the damage.  The next step is to install water retention ponds or something to slow down the flow."