Cayuga Operating Company has announced plans to construct one of the largest solar power farms in New York State on it's 434-acre Lansing site.  Cayuga Solar, estimated at a more than $25 million construction cost, will generate 18 megawatts of power, create up to 150 union construction jobs, and increase tax revenue to taxing authorities within Lansing and Tompkins County.  Company officials say the site is ideal because needed zoning and connections already exist for the coal-powered plant.

"The coal plant is a very, very good location for solar, not just because of the inter-connect and that we control the site, but it's industrially zoned and there's not much else of a re-use we're going to find for land like this," says Cayuga Operating Company Managing Director Michael Enright.  "This is a recognition and embracing that renewable energy is wanted and needed in New York.  We think we're ideally positioned and suited to provide it."

"This project will create an estimated 150 construction jobs and begin to decrease our region's reliance on conventional sources of energy. The fact that this solar farm is being built at a coal plant represents a growing commitment by Cayuga to transition towards cleaner energy," says Helming. "Anytime investments are made to reduce carbon emissions, it is a win for the economic viability of our region and a benefit to the environment. I want to thank and commend Cayuga Operating Company for making this project a reality."

The company confirms that up to 150 construction jobs will be created by the project.

"The number of good-paying union jobs that will be created in the construction and operation of Cayuga Solar will be a huge benefit to the Building Trades and its local IBEW members, many of whom currently work at Cayuga," Cahill adds.  "The emerging clean energy economy is good for the environment and good for our members who have the skills and training necessary to build these projects safely." 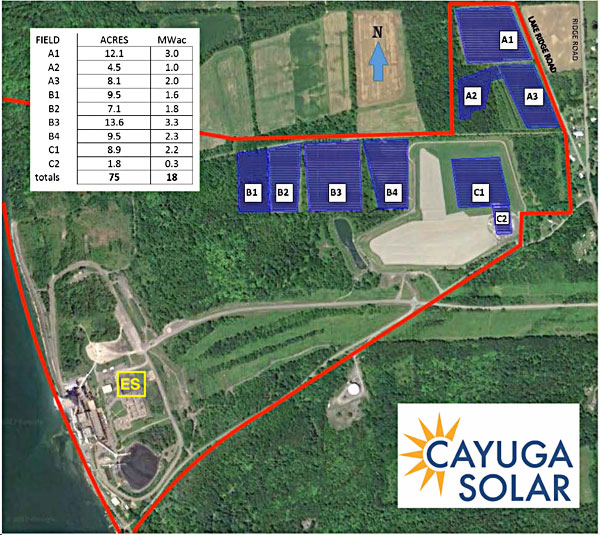 The coal-powered Cayuga Power Plant (lower left) is only a small piece of the 434 acre site owned by Cayuga Operating Company (enclosed within the red line on this map). The proposed Cayuga Solar farm will be located on 75 acres in the north-eastern portion of the site. It will have an 18 megawatt capacity, making it one of the largest solar farms in the state, and the largest in upstate New York. (Map courtesy of Cayuga Operating Company)

The solar farm will cover 75 acres of the Cayuga Operating Company site, with a portion capping the existing coal-ash landfill, which company officials say provides another environmental benefit, as well as reusing land that could not be used for anything else.  The company says 18 megawatts is enough electricity to power 3,100 homes houses.  Enright says the parent company's Maryland solar farm was also built on prison land that was not likely to be used for other purposes in the long term.

Company officials say Cayuga Solar is ideally positioned in these RFPs because the Cayuga site has two key competitive advantages including site control and an existing interconnection.  These will allow the company to bring their solar farm online before competitors around the State.

"In many ways this has some of the same characteristics as our Maryland solar project," Enright says.  "We're looking to connect with the local education system to make it part of their curriculum.  The site we built on was prison land.  We leased land from the state, and it was land that wasn't going to be used for agriculture except every now and then you'd lease it out to a farmer because corn prices were going up.  But there wasn't much else that was going to happen on that land for the next hundred years, as there had been for the previous hundred years."

75 acres on this rise will be covered by solar panels, including capping an existing coal ash landfill

"The co-location of a large-scale solar farm with an existing coal plant represents the energy transition underway in New York and across the United States," says Cayuga Operating Company Vice President of Development Jerry Goodenough.  "We recognize and embrace the role renewable energy will play in the better energy future we all want for New York, and this project will help keep New York on a path to achieve its stated renewable energy goals.  And we see Cayuga Solar as an important part of Cayuga's future commercial viability as well."

The big question for Lansing in the past eight years has been: will the power plant close entirely?  The question has been front and center as the plant's value has plummeted from $160 million in 2009-10 to $35 million this year, and only $20 million in 2019-20, the last year in the newly negotiated PILOT (Payment In Lieu Of Taxes) agreement.  This year in particular tax revenue loss from the plant is being shouldered by homeowners within the school district, which has had a rough time planning its financial future in the face of the plant's uncertainty.

"We're not making any announcement," Enright says.  "Markets will dictate the future of the plant."

But the power plant PILOT does not cover the piece of land on which Cayuga Solar is planned.  The parts of the property being targeted for Cayuga Solar has a small assessment at the moment, which is sure to rise as soon as something it built on it.  Enright is not ready to be specific, but he does say he anticipates some sort of assessment or a new PILOT for Cayuga Solar that will result in new revenue to Tompkins County and the taxing authorities -- Town, School, Fire, and library districts -- within Lansing.

"This would be a completely separate process from the Cayuga Operating Company coal plant," he says.  "It's going to be a separate development entity, and I suspect this would be a new conversation with the County and the local municipalities about what's the yield on this and how do we develop a PILOT or some type of revenue around this.  That's what they're doing in Dryden and other places.  In the one we developed in Hagerstown, Maryland it was the county that brought us in for a PILOT negotiation on our solar farm there.  So we're comfortable with that negotiation as well."


Cayuga Solar has already received an approved position to connect to the NYISO (New York (Independent System Operator) energy grid.  Company officials believe that, along with the existing connection to the energy grid and the fact that they already own the land for the proposed solar farm gives them a significant head start as other companies around the state race to get large solar projects approved.  The company is currently working with the Town of Lansing on necessary planning and environmental permits. Company spokesmen say applications will be ready to present to the Town planning board in June.

"Our sources of creation of electricity are evolving, and so is Cayuga's business model," LaVigne says.  "This business plan shows vision, creativity and a willingness to evolve into a supplier of inexpensive and cleaner power to our region."

Cayuga Solar officials are also discussing ways the solar farm can be used in curriculum of the Lansing Central School District and Tompkins Cortland Community College (TC3), including bringing student for tours of the site during and after construction and online monitoring resources once the solar facility begins generating electricity.

"We know renewable energy will be a significant part of our students' futures," Lansing School Superintendent Chris Pettograsso said.  "We are lucky to have the chance to be a part of such a significant project, and to have it almost literally across the street from us." 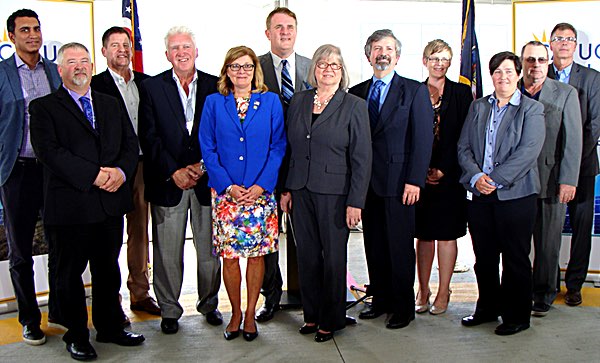 Enright says his company has a history of similar educational connections.

"At Hagerstown Community College one of the things they did was have classes come to the site to go around with the electrical engineers and construction leaders to show them how panels work and are connected to the grid," he says.  "They also put a monitoring station at the community college where they could chart the output of the plant during the day, show peak periods, meeting needs and matching solar with the needs of the grid.  Those kinds of things."

In addition to a possible PILOT agreement with Tompkins County Cayuga Solar will be navigating the various credits and abatements available to large commercial solar facilities.

"We would bid into the New York ISO market on a wholesale basis, in a real-time and day-ahead market," explains Goodenough.  "That would be a piece of the revenue stream.  Then we would be looking to obtain a value in the REC (Renewable Energy Credit) market through a NYSERDA (New York State Energy Research and Development Authority) or RFP (Request for Proposal) process.  For every kilowatt hour you sell as energy you sell of energy, you also get a Renewable Energy Credit.  Those credits have value."

In a press release the company says Cayuga Solar is phase one of a multi-phase plan that they say will turn the 434-acre site into an 'energy park' that they still hope will include repowering the existing plant with "cleaner and cheaper natural gas".

"I'm a big believer in the 'all of the above' strategy," Sigler said.  "If we want to get to that better, cleaner energy future, we have to be honest that this transition will take time -- and its going to involve a mix of renewables and natural gas."