Mine Manager Shawn Wilczynski (left) takes Lansing Town officials on a tour of the mine. Mine tour photos courtesy of Mike Sigler

Lansing Town officials went 2,300 feet below ground as they toured the Cayuga Salt Mine Friday (9/11), and New York State Senator Pamela Helming toured the mine Tuesday.  Mine officials offered the tour in the hope that it would help them understand the health and safety issues motivating the construction of a new 2,500 foot deep mine shaft about seven miles north of the mine's existing lakefront above-ground facility.

"The Town of Lansing and Cargill have a long-standing partnership and to that end, Cargill is committed to maintaining an open and transparent dialogue about our work at the mine," said Mine Manager Shawn Wilczynski. "We hosted the tours as an opportunity for elected Town of Lansing officials and Senator Helming to visit the mine so they could see our facility, ask questions and gain a deeper understanding of why the #4 shaft is vital for the safety and health of our employees."

The $42 million mine shaft received a permit from the New York State Department of Environmental Conservation (DEC) about a month ago.  The Town Planning Board is currently considering plans for the surface portion of the shaft, a grouping of buildings designed to blend with nearby farms 12.5 acres of a 57 acre plot on Ridge Road.  Planning boards typically consider environmental impacts as well as planning issues such as access, landscaping building features, and infrastructure, but because the DEC has jurisdiction  over mining issues and the environment in this case, town officials are only charged with reviewing and approving plans for the surface buildings, ground level infrastructure such as roads, and surrounding landscape. 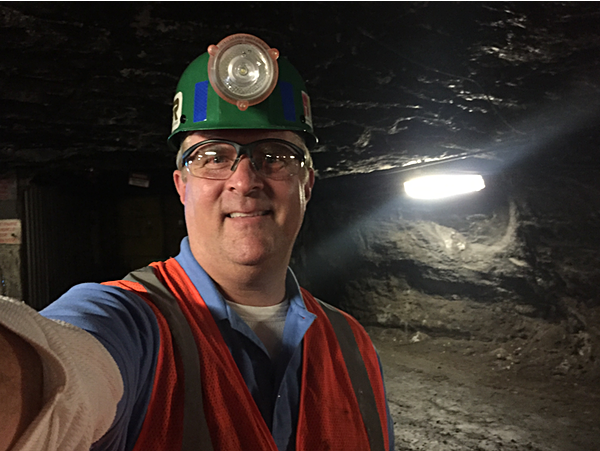 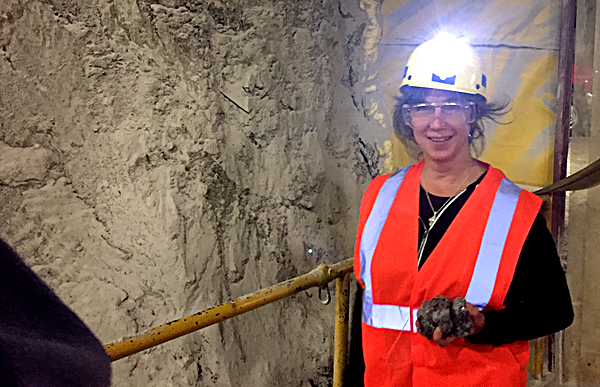 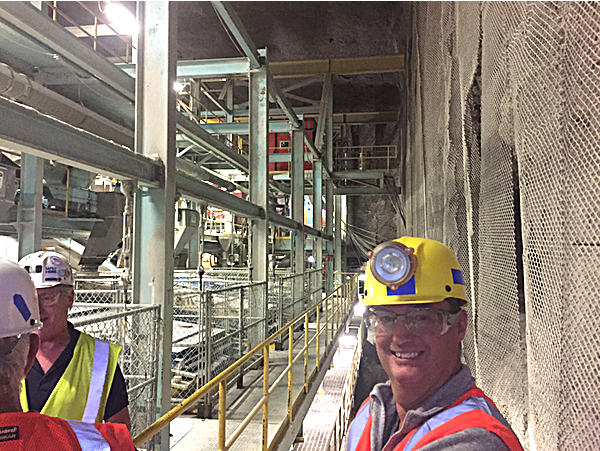 Lansing Councilman Robert Cree examines a crushing screen plant that is so tall it spans three veins of salt. Loaders convey the salt to crushers that break it down to chunks smaller than a football, then loads about 600 tons of salt per hour onto conveyor belts that carry the salt to the main tunnel. They deposit it on mainline conveyor belts that then take the salt through the crushing screen plant that reduces the rock salt to the size needed for the final product, and eventually to a shaft to be hoisted to the surface storage area north of Portland Point, and south of Myers Park.

Mine officials have offered many reasons for the new shaft.  The ability to go down to the mine closer to the active mining area will take 45 minutes off the current underground commute.  Resistance in power cables will be less when power is provided through the new shaft location.  The new shaft will provide alternate emergency egress for miners.  And the key reason is to provide fresh air for workers in the mine.

"Trying to get fresh air through a mine seven miles long is a challenge," said County Legislator Mike Sigler. "This new shaft will make that much easier, giving workers better air, but also making it safer for them in case of evacuation or if someone has a medical problem and has to be taken out of the mine as quickly as possible."

Currently mine workers commute to the surface facility where they change into safety gear before descending into the mine, about a five minute ride.  Small trucks then take them about seven miles to the active mining area, another 40 or so minute commute.  Miners work in three production shifts, Monday through Friday, and maintenance shifts on weekends.  As many as 50 employees may be underground during a shift.

"It was fascinating to be 2,300 feet below Cayuga Lake and see what the Earth looks like at that depth," Helming said. "What struck me most about my visit to Cargill's Cayuga Salt Mine in Lansing, though, is how happy and proud their employees are to be working there every day.  I met some of them at the Lansing Bicentennial Celebration parade, and I learned that many of them are second- and third-generation workers. I was also impressed by how Cargill makes the safety of their employees the number one priority in everything they do. I even had to go through the safety training before I toured the mine. Second to safety is Cargill's commitment to the community, and the company is a terrific partner that supports many great organizations and causes in the area."

Mine officials say the seven miles is close to the limit of the distance that fresh air can be safely and effectively circulated.  The new shaft could potentially double the hundred year old mine's lifetime before another shaft is considered.

"This shaft  will safeguard workers and allow Cargill to continue mining under its existing permit approved in the early 2000s and protect the mine that produces the salt for our roads, keeping us safe in the winter at a vastly cheaper price than if we had to truck salt in from some far off mine, and providing the economic benefits that it has for our area for the past century," Sigler said. 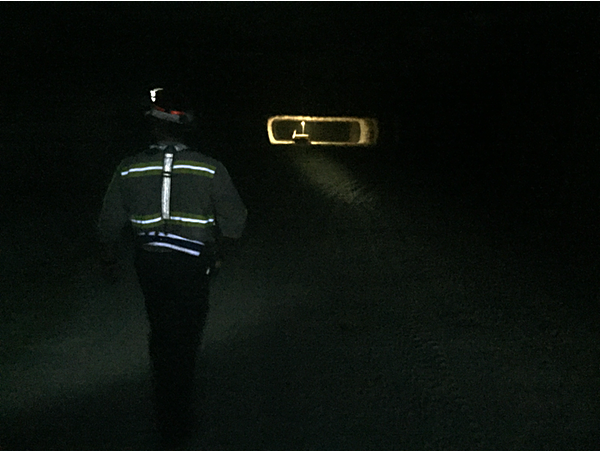 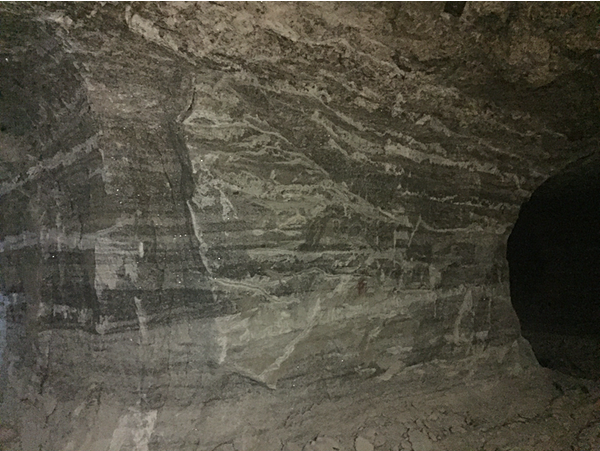 Thick pillars of stone and salt support the mine

The 100 year old Cayuga Salt Mine is the deepest salt mine in the United States.  200 people are employed above and below ground.  The mine produces two million tons of rock salt annually, about half of which is used on roads in New York State.

"We very much appreciated the time they took out of the their busy schedules to learn more about our operation," Wilczynski said.