The Lansing Town Board unanimously approved Sewer District #1 Wednesday at a working meeting in the Village of Lansing.  After at least two decades of trying to pass a municipal sewer projects in the middle of the Town of Lansing, a three-municipality agreement that makes the new project viable is being lauded as a big win-win-win for the Town and Village of Lansing and Village of Cayuga Heights.

"This is a pretty good day for everyone," said Lansing Town Supervisor Ed LaVigne.

Representatives of the two major developments that will benefit from the sewer, Tim Buhl, representing WB Property Group, which is developing Cayuga Orchards, and John Young, who is developing English Village, were present when the Board voted.  The two projects, currently in the planning stages, will bring new sewer to an approximately190 acre portion of the Town.  Cayuga Orchards will consist of 102 unit rental town homes and English Village that will bring 59 town homes and 58 single family homes to the Town.  Also included in the new sewer district are The RINK/The FIELD, and Hicks Storage.  33,050 gallons per day of sewage treatment in the Cayuga Heights Wastewater Treatment Plant allotted to the Town is deemed to be enough to service the new sewer district.

The Board voted on an environmental review that declared the project will have no significant negative impact.  Town Attorney Guy Krogh said that because the Town is not actually building a plant or processing effluent in the Town, and because this is only a 525 foot sewer main.  He also noted that the project would actually have a positive impact on the environment, because the alternatives are not as reliable in terms of processing sewage over a long period of time.

"The overall benefit here is to increase and help the environment and reduce environmental impacts, not to create more," said Krogh.

The sewer will have no fiscal impact, because sewer is paid for only by those properties included in the sewer district.

A parallel project in the Village of Lansing will add new sewer along and near Cayuga Heights Road, which developers of the two large town projects are contributing about a third of the cost of.  The Village portion of the new sewer is an important element of the Town sewer, because it will provide the path to transport effluent from the new Town sewer main on East Shore Drive through the Village to the Plant in Cayuga Heights. 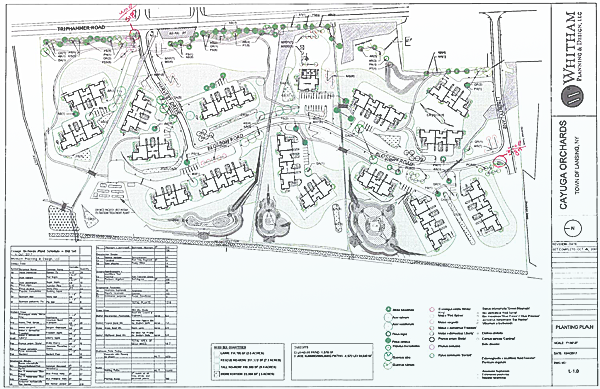 WB Property Group, which is developing the 102 unit Cayuga Orchards project on Triphammer Road, south of Asbury Road, has tried to find a suitable sewer solution for at least five years. When a public Town sewer was contemplated in 2013 it appeared they could hook up to that, but the project never came to fruition. Since then project engineers have looked at a variety of solutions including shared septic and a package plant that would allow the project the density developers feel they need to make the project worthwhile. The current public sewer project is the best possible solution, motivating developers to chip in for the Village portion of the system, which will transport their effluent to Cayuga heights to be treated.
"All in all it seems like a perfect marriage, because we have private lane coming to help the public lane try to get something done here," said Cayuga Orchards Project Engineer Tim Buhl  at a Town Board meeting last month.  "The sewer will be added to parts of the Village that need it, but also these sections of the Town which have been designated for higher density development.  After years of struggle trying to do it the hard way this is going to be relatively easy."

Negotiations between the Villages of Lansing and Cayuga Heights and the Town of Lansing have been underway since 2016.  In order for the Town to have a sewer the Village of Lansing had to agree to transport sewage from the Town to the treatment plant in Cayuga Heights, which, in turn, had to agree to treat it.  A big impediment to past sewer projects has been the high cost, especially to residents who did not want sewer, but also to those who did.  With major developments footing most of the bill, only those who want this sewer will pay.

LaVigne said he held off the vote approving the sewer district, in part out of respect to the Village of Cayuga Heights, which had not voted to approve the deal before last month's Lansing Town Board meeting.  He thanked the developers for their contributions in making it happen.