Woodsedge Road to be Moved

When the first phase of Milton Meadows is completed next summer a new road will form a four way intersection with Auburn Road (34B) and Woodsedge Drive.  If the new road were to be placed exactly across from Woodsedge Drive it would have to go through a private residence.  As the homeowner might take exception to that, town officials plan to move the north end of Woodsedge Drive a few feet to the west.  That won't happen until the land sale is final, and a grant will pay for most of the cost.

The Town Board approved a permit for the developer, Cornerstone Group, to access land that will remain under town ownership in order to build the new road north of Auburn road.  The developer will build the road and accompanying infrastructure to town specifications, and then dedicate the new road to the Town when it is completed.

A $75,000 grant obtained by State Senator Pam Helming to pay for materials for road projects will pay for most of the Woodsedge Road adjustment.  In-kind labor provided by the town Highway Department is a requirement of the grant.  Simply put, the parking area to the west will trade places with the roadway to the east, aligning the north end of Woodsedge Drive with the new road. 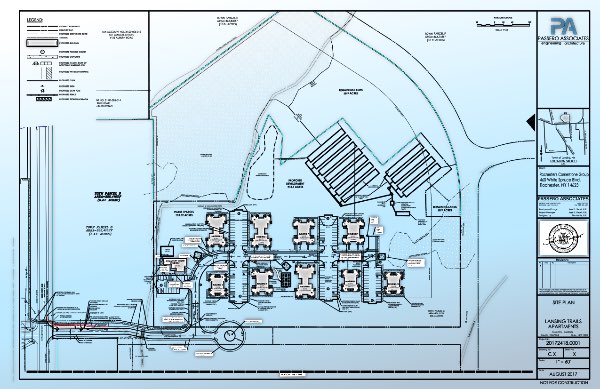 Milton Meadows phase one will consist of 72 affordable units for low to moderate individuals and families with priority given to veterans. The units will be contained in nine two-story buildings.

Milton Meadows will be the first development on the town center land across the street from the town ball fields. A new road will be constructed to access the development.

Cornerstone plans to purchase the land for the first phase of its project in early November, and begin construction on the road immediately.  All but the top coat will initial be completed to allow access for construction vehicles.  The company plans to complete nine apartment buildings plus a community building before next July.  Cornerstone has applied for separate building permits so they can get certificates of occupancy as each building is completed.  Cornerstone Vice President Of Development Carol Oster said the company hopes to have the units completed and rented by September of next year.

"We plan to start the construction when we purchase the land from the Town," Oster told town officials earlier this month. "We plan to start that November 1st and we plan to complete construction by next September.  We anticipate being able to complete the entrance road by June of next year if the weather cooperates, and start occupying apartments by the end of next June.  That will take us all summer and they will be fully occupied by September."

Part of the agreement is for Cornerstone to issue a letter of credit that will insure they pay for the road to be completed if they don't, for any reason, complete it themselves.  Milton Meadows is the first project to be developed on the town center land across the street from the town ball fields.