Lansing's Code Enforcement took some heat at Wednesday's Town Board meeting when Scott Morgan complained about the Town's refusal to allow him to use an old school bus as a pig barn on his property on Peruville Road.  "The bus was a cheap solution to a barn," he said.  "It was well insulated and structurally sound.  (Lansing Code Enforcement Officer) Dick Platt sent a letter dated February 13 stating that the pigs must be removed to the bus, because it was not up to code.  He supported it with a document which stated that all farm buildings are exempt.  Is this not a farm building?  Pigs were living in it." 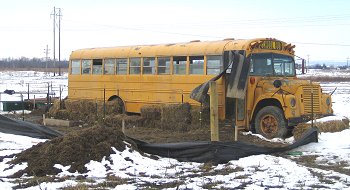 Is it a barn or a bus?
But Darby Kiley, Platt's supervisor, says that according to Town law the bus is not a farm building.  "The way the code is written you can't house animals in something that's not considered a building," she says.  "To be qualified as a building there is a list of requirements that it needs to have, and a bus just does not meet those requirements.  We provided him with the New York State building code and sections of Agricultural Markets law that describe the building regulations.  When you have something you want to consider a building for housing animals then it has to be a building.  A bus is not a building."

Morgan says he had built a building off site to comply with the violation, but he was waiting for the ground to freeze so he could move it into place.  In an irony of timing he moved the building on March 16th, the day after the 30 day compliance period had expired.  And he was served with a court appearance notice that day.

Others spoke to the Board in defense of Morgan.  Scott Pinney has a history of confrontation with the Codes Office, having been involved in two lawsuits with the Town, which he said he had won.  He said that being served with a lawsuit by the Town should be a last resort.  "It's really intimidating for a person to get one of these things," he said.  "One of the main things I wanted done was that when we took someone to court that we exhausted every possible avenue to prevent a lawsuit so the things that happened to me wouldn't happen to somebody else.  It seems harsh, but when a guy costs the taxpayers of the Town and individuals hardships, you shouldn't allow that guy to work for this Town."

Nate Snyder also supported Morgan, accusing the Town of uneven enforcement.  "I'm in the fire department, and there are buildings in this town that thousands of people go in and out of every day," he said.  They're not up to code.  Not even close." 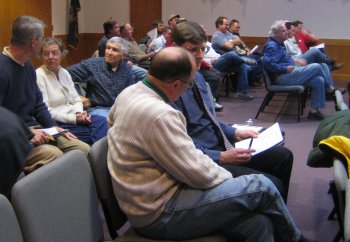 Wednesday's Town Board meeting was unusually well attended
But Kiley notes that the Code Enforcement position is bound to anger some people by its very nature.  "Most of the time you're telling someone they can't do something," she observes.  "That's why this comes up.  It's nice when people come to you and talk about what their plans are, and you can guide them in the right direction, but oftentimes something is brought to our attention and we have to explain how it can be remedied.  In this situation the only remedy is that you can't use a bus for a building."

She says that the action was precipitated because Platt and Building Inspector Lynn Day observed the violation themselves as they drove to and from work each day, but that the office had also received complaints.  "We had a number of complaints," she said, noting there were three written complaints in the case file.  "Even Town Board members coming to us having said that some residents have mentioned it and asked what was going on with it."

Kiley indicated that her office had been in touch with Tompkins County SPCA officials who told them that the pigs are being very well cared for.  " We called them and they said the pigs are well cared for, so that became not an issue for us," she says.  "At first we thought, 'are they going to be warm enough?'  But we know they are and the SPCA was pleased with what was going on there.  But in terms of code it's not considered a building, and that's what farm animals need to be housed in."

Not everyone was angry about the Codes Office, though.  Ladoga Park Road resident Dave Heck told the Board he was pleased that his January complaint about two eyesores on Myers Road had been addressed expediently.  "I have to report that within a matter of days the trailer and trusses were removed," Heck said.  "For that I'd like to thank the Code Enforcement Office, which apparently can use a little positive reinforcement."

Kiley noted that it appears as if Morgan will comply with the law.  "He did build a building," she notes.  "That's exactly what we want to see."  She said that it hasn't been inspected yet, but she believes it will meet the code requirements if it meets the road setback requirements.  She also said that an appearance ticket is not the same as a lawsuit, characterizing it as a requirement "to go to court to discuss the issue."  The incident may be one of unfortunate timing, because a new wooden pig barn has already been erected behind the bus.