Monday morning was a milestone for the Town of Lansing, local business, and Tompkins County Area Development (TCAD) when officials gathered for the ground breaking for the Warren Road Sewer Project.  Somewhat like the Phoenix, the project rose from the ashes of the town's larger sewer project that failed three years ago because of its cost.  When that project failed Transonic Systems Chief Operating Officer Bruce Kilmartin and TCAD's Heather Filiberto approached to town to see if a smaller project could bring municipal sewer up from the Village of Lansing's sewer to the Warren Road Business Park, where Transonic is located. 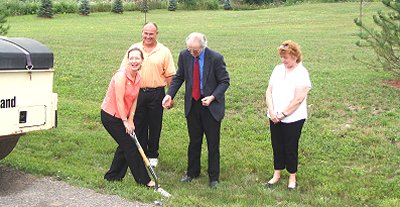 Transonic Systems has been the main driver of the project.  The company has a 30,000 square foot facility that currently houses about 115 of their world-wide workforce of about 130.  But the septic system needed to service that building takes too much space to allow expansion.  The company was so motivated to bring sewer to the property that it footed the bill for the initial sewer study.  Transonic President Cornelis Drost says that the company wants to double their space with a 30,000 square foot addition, but that would not be possible without municipal sewer.

"The biggest impact is the number of jobs," says Lansing Town Supervisor Scott Pinney.  "We could have lost jobs.  One business was talking about leaving, because they couldn't expand without sewer.  They have obviously decided to stay and build the expansion, so it will create jobs.  That's very important."


The company specializes in high-tech flow meters for medical use.  Among other purposes, Transonic meters help measure blood flow during heart or neurosurgery surgery, helping to reduce the risk of vascular complications or strokes during surgery.  The company was founded based on Drost's invention of the transit-time ultrasound flowmeter when he was a senior researcher at the College of Veterinary Medicine at Cornell University.  Drost says that being able to keep his company in Lansing maintains the Cornell connection, and allows him and his employees to stay in the area.

"We love to do that," he says.  "Our roots are here.  Cornell University remains a strong backbone behind what we are doing.  It's a good location to give our medical device business international exposure.  People in Japan know Cornell better than people in the U.S.  This is where our intellectual backbone is.  And all of us have families.  It's a great place to grow a family."

Drost says the company would like to have built the addition a year ago, but says his employees have been willing to put up with crowding knowing that the project was moving forward.  He says the sewer will keep other businesses in the business park as well, noting that UPS needs public sewer to keep up with long term environmental requirements.  The higher density development sewer makes possible will allow for new businesses to come there and to nearby areas served by the new sewer.  Pinney says that density is key in bringing benefits to the Town that fit in with long term planning.

"Obviously that relates to the tax base," he says.  "With commercial development you create a better tax base, because you're not demanding all the services you would as a resident.  Some of the vacant land here can now be developed in high density, which will put a crimp on sprawling out to the farm land.  We all talk about density and trying to get it done, but without sewer it's hard to get the density."

"The good news with the sewer line is that it's not only going to serve the businesses, but it's going to serve some multi-family housing," Filiberto adds.  "It's going to connect to some vacant land that is prime for higher density multi-family housing, and there is also some vacant land owned by Cornell and some owned by Tompkins County that will be ready for manufacturing, light industrial development.  So it's a great community building project all the way around."

TCAD's role has mainly been to put people together and coordinate the project.  Filiberto noted that the project only went through because of cooperation between the Town of Lansing, Scott Pinney, Steve Farkas, and Bud Shattuck, Town of Lansing Sewer Committee members including Andy Sciarabba and Noel Desch, Bruce Kilmartin from Transonic, Ed Marx from Tompkins County Planning, and Tom LaVigne from Cornell Real Estate.  TCAD also got a grant that will pay for about 20% of the cost, which will reduce the cost to the businesses and property owners within the new sewer district.

Pinney says that there has been substantial progress on a new Town sewer project as well.  A feasibility study was completed and approved by the DEC (Department of Environmental Conservation) this spring.  The DEC did the outsource study for lake water that set the parameters that the sewage treatment plant will need to meet before the processed water can flow into Cayuga Lake.  The Town is putting together an RFP for pricing the sewer plant with the lines.  Pinney says he hopes to have that ready for next month's board meeting and the board will probably vote on that this fall some time.

"If that happens I am hoping that something can get started within the next two years," he says.  "The Town Center Plan is moving quickly right now.  I think that will be complete this year or certainly by early next year."

Pinney says he thinks the new project will pass because the cost will be significantly lower that that of the old project.  That project required an intermunicipal solution that would have forced the Town to construct an $18 million trunk line through the Village of Lansing to join sewer lines in the Town (at additional cost) to the Cayuga Heights Treatment Plant.  At the time there was fierce opposition from the Village as well as Town opposition to the cost.  Additionally, not everyone in the sewer district would actually get service.  That doomed the project.

Pinney says a stand-alone plant will only cost about $3.5 million by contrast, and the service area will also be smaller, at least at first.  That will bring service to areas that really need it such as the Lansing schools, the state schools, lake front neighborhoods where flooding threatens septic system integrity, and importantly to the area where a town center is planned.

"That's the main reason for the stand-alone plant, to come through the town center area," he says.  "It would also tie in the Lansing schools, and the state school and that area.  The sewer will certainly help bring businesses that want to be in the town center area."


Drost says his company has an aggressive schedule for building the addition.  Ground cannot be broken for that project until the sewer project is completed, because the new building will cover the area currently used for the current facility's septic field.  He says that if the sewer can be completed by the end of this year, ground preparation for the $3 million addition will begin this fall.  Ground breaking for the new building would be spring next year, and it will be completed in the late part of next year.

He says that the addition will mean doubling his work force, and that eventually new additions could mean as many as 500 jobs at the company.