Glimmers of Good News Among The Bad For Lansing School Budget

While the Lansing Central School District continues to look at about a million dollars in cuts for the next school year, District Business Administrator Mary June King had three pieces of good news to share at Monday's Board Of Education Meeting.  Most significantly, at the end of last year King was estimating a budget gap of $1.8 million.  Monday she reported that adjustments and recalculations have dropped the gap to $1,080,500.

"We're currently projecting the gap to be down from 3.7 to 2.9, which is a huge plus," she said.  "If we were to appropriate $1.9 million, the revenues start to catch up.  That would bring our projected budget gap to just over one million."

Projected Cuts
Revenues continue to be a problem for the district.  Next year's projected budget is currently calculated at $26,560,000, but revenues are projected to be $25,523,500.  Superintendent Stephen Grimm said he is continuing to work on a list of potential staff and program cuts, but stressed that it is very early in the process.  He said he has started categorizing cuts into three categories.

"We looked at some possible reductions and we coded them in green, yellow, and red," Grimm said.  "Green is for reductions for cuts we probably would be making anyway, even if we had a surplus of funds.  Yellow is for cuts we're not quite sure about yet or we don't have a definitive plan or confidence that we can make them.  Red are cuts we know we're not comfortable with."

Green items include a retiring psychologist position that will not be refilled, a cleaner, removing a layer from the curriculum council, sabbaticals, and a Director of Technology partial position among others.  Grimm noted that two years ago the high school served 400 students, but the population is expected to decline to 350 next year.  He said that some teacher positions will likely be cut because the drop is significant enough to save on the number of class sections needed.

Cuts to the music program are likely to be a hot button issue because it is beloved in Lansing.  Resident Joe Woelfel noted the board is considering spending a capital project surplus on extra security cameras and an electronic road sign at a time when some music lessons are being taught in the hallways.  He asked whether the money wouldn't be better spent on music classrooms.  When Grimm showed the Board the current cut list $35,000 in cuts to the music program were marked in red.

"These are all fluid," Grimm said later.  "It's early February.  We've got to remember that."

With salaries and benefits making up the brunt of the school budget public scrutiny of the 'cut list' is high.  Currently, the faculty contract is currently under negotiation and the outcome may have a significant impact on the budget.  Of close to 250 district employees, about 6.2 full time employees work in the Superintendent's and Business offices.  Other administrators include the three principals for the elementary, middle, and high schools. 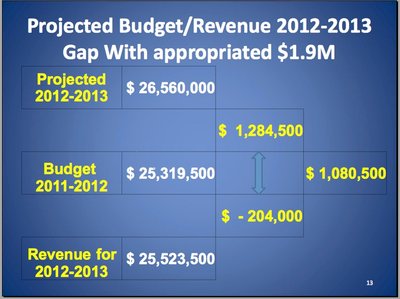 Lansing Alumnus Walker Reynolds gave an impassioned argument in which he stressed the value of teachers and admonished the board to think about a list of cuts that seems to focus on teachers and not administrators.  He also told the faculty that they have to give something back.

"There are no cuts in our top-heavy administration," he said.  "That may be justified, but unless you explain why there are none it doesn't look good.  It doesn't look right to the rest of the community."

Some Bright Spots
King reported on two 'great little successes' that have occurred in her office in the last couple of weeks.  King was able to persuade Moody's to retain the district's AAA rating despite the economic downturn and challenges posed by the reduction of tax revenues from the AES Cayuga power plant.  King says Moody's was likely considering downgrading the district to an AA rating, which would impact the interest rates the school could receive on bonds or bans it might pursue to pay for projects.  A triple-A rating is the highest Moody's awards, indicating the highest gradation of creditworthiness.

"In discussing the Board Of Education's protocols and its perspectives on appropriating funds ove the last multiple years, the slope management of the reserve funds that Dr. Grimm came up with, and by bringing things like that to their attention we found out just last week that we were able to hold onto our triple-A rating," King told the board.  "That's an outstanding opportunity for the District as we look to go out to refinance a $7 million bond that you agreed to refinance not long ago.  That's a good, good thing for us."

King had asked Questar III State Aid Planning to assess the impact of an error in reporting the value of AES Cayuga in the taxable property roles in the first year of the PILOT (Payment In Lieu Of Taxes).  Tax levies are paid by a combination of taxable properties and properties with PILOT agreements.  It's like saying that different foods end up in the same place: the money from the tax roles and PILOTs end up funding the schools, towns, counties, and so on.

But the way they are reported impacts calculations made by New york State when it calculates school districts' eligibility for state aid.

"The analysis I received analysed the wrong information, but it did provide me with a spreadsheet that had all the formulas cranked down into usable measures, so I was able to plug the actual numbers into those formulas," King explained.  "I learned we could increase our state aid by several hundred thousand dollars if those monies had been treated appropriately by the County Assessor's office."

King checked her numbers, then got Tompkins County Assessor Jay Franklin to sign off on the required documents, which were sent to the State Comptroller's office.

"Where many of the formulas that calculate our aid are based on our wealth.  Our wealth consists of two things: one is the income of the district, and our property wealth," King said.  "By applying the corrected formulas, Lansing's property wealth of $860 million dropped to about $700 million.  That could mean an additional $300,000 in aid.  King says that is the 'Gap Elimination Adjustment' is applied by the state it will mean closer to $200,000 in additional aid next school year."

While it is nearly three months before a final budget has to be formulated, the level of detail being considered in the $26.5 million budget will make the time pass all too quickly.  Uncertainties about what the State will do including monies some say the State is illegally withholding from schools exacerbate a process in which it seems the numbers are changing from moment to moment.

"You keep thinking about revenues, because it's all a guessing game," Grimm said.  "Did we budget the right amount?  Did we budget too much?  We look at every single budget code.  As Mary June goes through that you are getting little glimpses of that level of analysis."