Solar Array Will Save School and Possibly Town $$

The Lansing Town Board is considering whether to consider joining a major solar project that could save considerable taxpayer dollars in utility bills.  Town officials have been asked to consider joining a partnership between the Lansing Consolidated School District and RER Energy Group, which proposes to build a 1.5 megawatt solar array in Lansing that could save the school district $45,000 in the first year.  Town officials are not ready to jump on the project, however, unless they are convinced the Town can also realize significant savings.

"Lansing taxpayers will save over 25 years via discounted electric rates and hopefully this will inspire other businesses, public entities and homeowners to invest in renewable technologies since they are now economically practical," said TST BOCES Energy Management Coordinator Michael Koplinka-Loehr at a Town Board working meeting earlier this month."

The key issue at the moment is finding land that is well placed to hold a solar array and deliver power to the school district.  To meet district electricity needs, solar panels would fill seven acres.  If the Town decides to join the project more land will be needed. The Cayuga Power Plant was willing to lease land for the project, but the cost of transmitting the power to the schools from that location would have been prohibitive.  Another site owned by Cargill was also considered.  Reportedly RER is negotiating with a local landowner to lease land that is well placed to accommodate the transmission of the electricity to the school campus and potentially to the town campus.

"TST BOCES Energy Management Services have assisted the Lansing school district in exploring 5 potential sites to date (6-7 acres are required near a 3-phase power line, and ideally w/in the Lansing district boundaries)," Koplinka-Loehr says.  "We will keep searching for opportunities until one works for the schools."

Last year a similar project was considered.  With TST BOCES Energy Management Coordinator Chris Santospirito facilitating the project, a New York State Energy Research and Development (NYSERDA) grant for Dynamic Energy to construct an approximately 6,000 panel, 2 megawatt solar array was approved.  The school district estimated the arrangement would save $45,000 in the first year.  When that deal didn't work out, a new agreement was worked out with RER Energy Group. 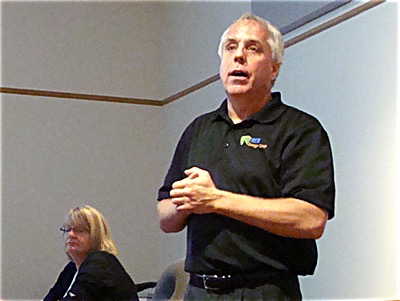 RER Energy Group Solar Project Developer Mike Roach explained the project to the Town Board September 16 to try to interest board members in joining the project.  He said that it might be possible for local homeowners to get power from the array as well.

Roach said that incentives to investors make it possible for them to offer solar power at lower rates.  New York State incentives contribute 15% to 20% of project costs, federal incentives provide another 30% (until January 1, 2017), and accelerated depreciation benefits provide about 30% more of project costs.  On top of that New York allows a third party to own the infrastructure that generates the power.  That means the school district doesn't own or maintain anything -- they simply buy electricity from this third party at a lower rate than NYSEG charges.

"A Power Purchase Agreement (PPA) allows for third party ownership,"he  said.  "That investor group is able to take advantage of those tax credits.  The idea is because they can take advantage of those tax credits, depretiation and the NYSERDA grant, they can pass those savings through to the end user, be it a local municipality or a school district."

But Town officials were hesitant to join without an analysis of the Town's current electricity costs and possible savings from the project.  A much smaller solar project at the Highway Department building theoretically yields savings now, but Town officials say they don't have a usable way to calculate how much if anything, they are saving.  The Board agreed to provide electric bills to Koplinka-Loehr for analysis.  If it is determined that the Town can save a significant amount of money, the Board will consider partnering on the project.

"Maybe that's a place to start, to see if there would be a great savings to us, and then go back and decide if this is something we might want to think about," said Supervisor Kathy Miller .  "We want to discus whether we are interested in this.  We would be partnering with the school district, so we need to think about whether we are interested."