Lansing on the Verge of Development Explosion

Development in Lansing may seem to be sleepy today, but a comparative explosion of new homes and apartments is ready to explode in the town, bringing new business and a potential of 500 or more homes and apartments to the town over the next decade.  The key is utilities and infrastructure, especially sewer.  If town officials have anything to do with it, affordable sewer is coming to the area where they want to encourage new development.

New projects are virtually sprouting along northern Warren Road since the sewer was completed there last year.  On the business side, Transonics Systems is doubling their plant space on land that was needed for a large septic field before the sewer was completed.  Earlier this month Village Circle Apartments, Village Solars proposed a total of 312 new apartment units at their location off of Warren Road.

The next explosion will be in and around the proposed Lansing town center, which will be developed on and around a 146 acre plot of land across the street from Lansing Town Hall.  Engineers have created a conceptual plan for a new business and technology park there, and two developers have already approached town officials about significant housing developments there.  The town Economic Development Committee has merged with the Town Center Committee to come up with more specific plans for the area.

Again, the key is sewer.  The Lansing Sewer Committee is working on what they hope will be an affordable sewer project that will stretch along Ridge Road to include the schools, the new town center, and loop around north on Auburn Road (Route 34).  The project includes a stand-alone treatment plant to be located not far from Lansing Fire Department's Central Station.

Lansing's Building Inspector Lynn Day says that between 2001 and 2003 new stand-alone house construction in Lansing was in the mid 40s to 50.  By 2007 that had declined to 30, and it went down to a low of 15.  Day says it rose to the low 20s a few years ago, and seems to be holding steady.  The cost of construction in Lansing was back to the 2004 level of $13 million last year after a dip that brought it down to less than half that in 2009.  About 150 building permits were issued in Lansing last year.

A new town center, about 30 stand-alone homes, Village Circle Apartments, Village Solars, Woodland Park, Lansing Commons, and Farm Pond Circle are among developments that are in the planning phases right now.  If you count all these projects the Town of Lansing is looking at close to 500 new families dwelling units including stand alone houses, townhouses, and apartments.  That doesn't include whatever happens to Kingdom Farm. 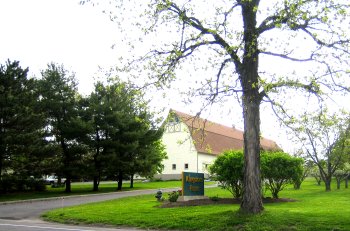 Kingdom Farm encompasses more than 500 acres between Peruville and Buck Roads.  The owner, Watchtower Bible and Tract Society, has an agreement with the town to contribute $1.5 million to a sewer project in exchange for an agreed upon amount of sewer capacity to the property, when the project came to pass.

In 2007 the owner, Watchtower Bible and Tract Society, sent representatives to the Lansing Planning Board to ask for zoning changes that would allow major development on the property.  They talked about a tiered plan that they called 'step-down growth' that would include large single family lots in the north section, with a combination of smaller homes, apartments and businesses in the southern part.  Two potential scenarios outlined what could be seen as a stand-alone village within the town.  The Planning Board turned them down because there was no actual project proposed at the time, but did not close the door to future changes one a proposal was in place.

The kind of density proposed, especially in the souther portion of the property, would be dependent on a sewer.  At that time Watchtower representative Daniel Rice said the society still intended to make good on the agreement to contribute to a sewer, and Lansing Sewer Committee Chair Scott Pinney says the agreement still stands.

Town Engineering and Planning Coordinator Jeff Overstrom says he thinks new construction, especially in the town center, will be more planning driven that market driven.  Until now developers proposed projects on land they owned anywhere in the town.  While that will not stop, the town center should act as a magnet to encourage new development in the center of the town, helping to preserve farmland and undeveloped areas.

"Taking into account the infrastructure and what they want to see there, they will have to come up with a solid plan that everybody can agree on, and then look at density and infrastructure needs for these different areas," Overstrom says.  "Then when a developer comes in and wants to build something we'll say 'we have this area designated for that.'"

At a time when the Town has such a large unexpended fund balance that it reduced the tax rate by 15% this year, it is in good shape to construct roads and sewer in the town center.  The costs will be recovered later when plots of land are sold to business and residential developers.  That investment will encourage faster development in areas where the town wants it.

A Lansing Town Center Incentive Zone has also been established to make development there more attractive.  Developers taking advantage of this program will go through an accelerated pre-approval process that, if successful, will help insure tax incentives when they go before the County Industrial Development Agency (IDA).

Overstrom says that high end homes have suffered because of the economy.  Of three spec houses' (homes that are built in the hope of selling them later) one is stalled, although the building permit still stands.  But other projects are primed to go forward. 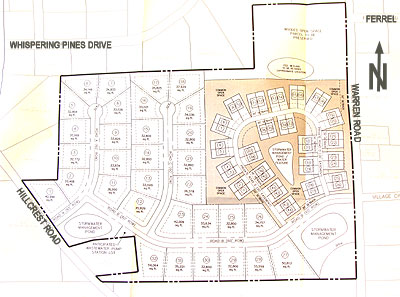 Woodland Park, at the intersection of Hillcrest and Warren will be townhouses with some single family homes as well.  A preliminary plan laid out potentially as many as 76 new homes in the town.  32 were proposed as single family home lots, and 44 town home units are envisioned as part of a walled community that includes ponds and walking spaces and adjoins a federal wetlands area and woods.

Lansing Commons, south of Woodsedge, will be 17 single-family homes.  That is a modest version of the project that was to originally include townhouses and single-family homes along with possible commercial buildings in a third phase of the project.  The developer's inability to get a State Pollutant Discharge Elimination System (SPDES) permit meant going back to homes with septic systems.  Overstrom says that some final issues are being worked out and the developer hopes to begin construction in the Spring or Summer.

Farm Pond Circle includes 19 lots on 48 acres for single-family homes.  Four will have 'affordable' houses that sell for about $165,000, with the rest selling at market value.

Of the proposed projects each has issues, but none are insurmountable.  For Village Circle and Village Solars it's a water pressure problem that could be temporarily solved by building a hydropneumatic booster station until the Town decides on where and whether to build a new  stand pipe (water tank) at a high elevation that would in the log term solve all the pressure areas in that whole area of Lansing.

Sewer capacity will also determine how many units can be built.  Projects along Warren Road will be limited by the capacity of the Village of Lansing's collection system and the Cayuga Heights treatment Plant.  The town will have more control over the use and capacity of its own plant.

Other projects are primed to start when a town sewer is built.  An office building is in the works behind Lansing Market, and the supermarket itself could potentially expand if its septic system can be replaced by a sewer hookup.  The town center's success will certainly depend on viable infrastructure, especially sewer.  Established older neighborhoods like the low-lying Ladoga Park and existing institutions like the Lansing Schools and the state juvenile detention centers will also benefit from sewer, as well as other projects along the route that are not part of the town center.

"There are also some other open parcels that are just sitting and waiting for sewer to come through," Overstrom says.  "There is interest in developing and building in Lansing.  The utilities are a big part of that."