While the weather keeps vying to be the story of the season, the Bobcats have taken advantage of every sunny opportunity and even the not-so-sunny days to post impressive performances, school records, and highly-ranked marks.

Lansing athletes Destiny Little '19 and Ethan Burt '20 also competed in their first pentathlons of the season, both finished with scores that meet the provisional standard for the state qualifier meet. Little and Burt will tackle their next pentathlon on Monday, May 14 with high hopes for achieving the automatic standard for the multi-event.

Full results can be found here. 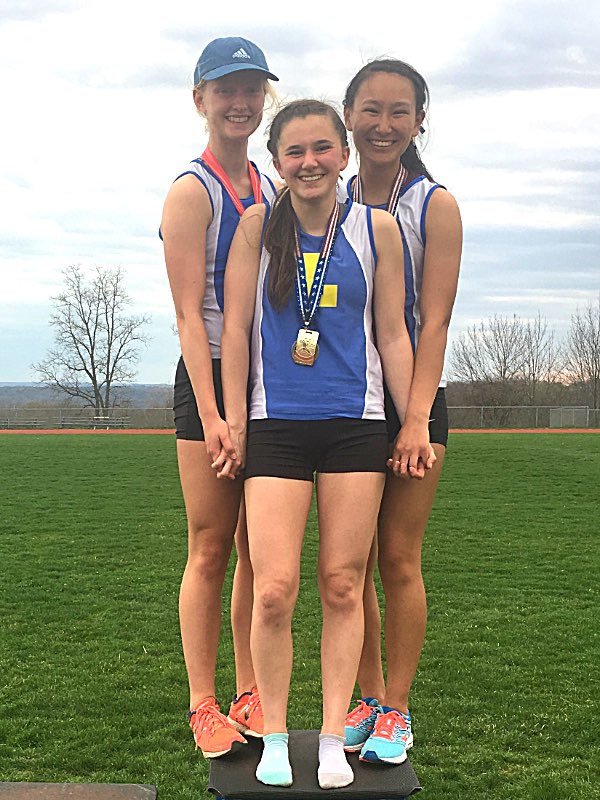 Bobcats Field Festival
Lansing hosted the second annual Bobcats Field Festival on May 2. As the thermometer rose to temperatures finally favorable to jumping and throwing, many impressive performances followed. Topping that list were two new school records: Little and Zaloj broke the previous high jump relay record – originally set in 1998 at 9'6" and tied by the duo last year – with a combined height of 10'0". Edwards and Panzer set a new long jump relay record, surpassing the 2007 record by nearly a foot with a combined jumping distance of 38'7"

Complete results can be found here.

IAC Divisional Meets
The much-anticipated Legends of the Night meet at Trumansburg on May 4 was cancelled during the third running event due to storms blowing through the venue. While disappointing to the 22 teams in attendance, coaches from the IAC North Small Division were able to coordinate a combined divisional meet, bringing nine IAC schools together at Southern Cayuga on May 7. Scoring against Trumansburg and Dryden, the Lansing boys and girls squads were victorious again. For the girls, this marks the third consecutive season of being undefeated in dual meet competition. For the boys, it was an impressive display of their depth and strength across events; they won the meet without winning a single relay.

Complete results can be found here.

Up next…
The Bobcats will take on their final invitational of the season today as they travel to Corning for the Fast Times meet. This is followed by the two-day IAC Championships at Trumansburg on May 17 and 18.

Are You a Sports Reporter?

We'll Make This Simple: We do not have the resources to cover sports, but you can help.  Lansing loves sports.  Our kids work hard and deserve the recognition.  So we do what we can, which is provide a venue for parents, coaches, fans or players to spend a short time writing bout our wonderful Lansing teams in school and in the Town Recreation Department.

Why We Need You: By the numbers we know our readers love to read about Lansing sports.  During the Varsity season the Sports page is as popular as our News and Around Town pages.  But with one staff reporter for all topics in our small publication the only way we can cover sports at all is if volunteer writers send in reports.

We would love to expand our sports coverage to reports on club sports, more Rec Department sports news, and other schools that Lansing students attend, such as Ithaca High School, club teams, or New Roots High School.

Coaches: We get many wonderful articles from coaches who have been really great about taking the time to write up theoir team's accomplishments.  If you are a coach, we love getting sports news from you!

Contributors don't have to be coaches. The Star welcomes contributors of all ages from students to seniors.  The great benefit of having a parent, a student, or any interested person writing about a sport is that you speak the language of the sport and therefore you can connect to readers much better than our one harried reporter could ever do.

Writing a sports article doesn't have to be hard.  While we do work with a style guide,
the basics are simple.  Our writing guidelines can always be easily found at http://news.lansingstar.com/

The many Varsity coaches that have contributed to the Star have been outstanding in this regard.  Individual contributors, often parents of the players, have contributed over the years and have provided amazing in-depth coverage of Lansing athletes.  The Lansing Star is also grateful to Geoff Wright, who has generously advertised on our Sports page since the Star began publishing, just to support sports in Lansing.

Coverage in the Star gives our hard working athletes the recognition they deserve, and your contributions make them and you stars in the community.  For students the opportunity to be published in a local professional newspaper is valuable when you are compiling your resume to get into college, or looking for a job.  For parents its a way to showcase your kids and their teammates.  For any sports fan it's a great expression of your love for our local teams.