With lessons from the first meet under their belts, the Bobcats took on Trumansburg, Groton, Moravia, Southern Cayuga, and Watkins Glen in Trumansburg on Tuesday. The short and flat course is known for its glittered "Magic Woods," and two Lansing athletes were able to take home individual victories across Cayuga's waters.

Aiden Hathorn '24, in just his second cross country race, had a strong start off the line and ran to a confident first place finish in the combined modified boys and girls race. Emmy Jackson '21 led the girls varsity race from the gun, leading her team to a second place finish behind Trumansburg. Rounding out the top five scorers for the varsity girls were Catie Eisenhut '20, Vanessa Bell '24, Teresa Garcia '20, and Hana Thibault '21. 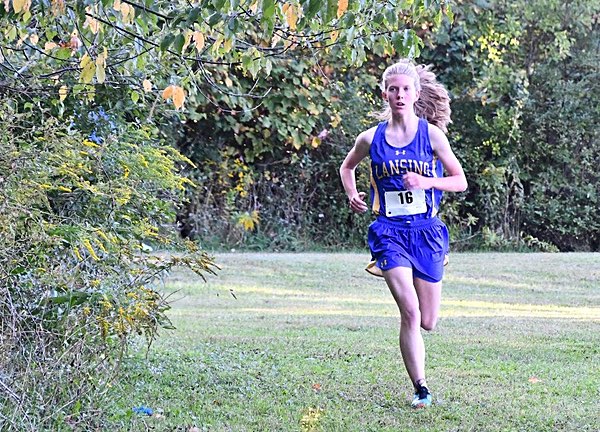 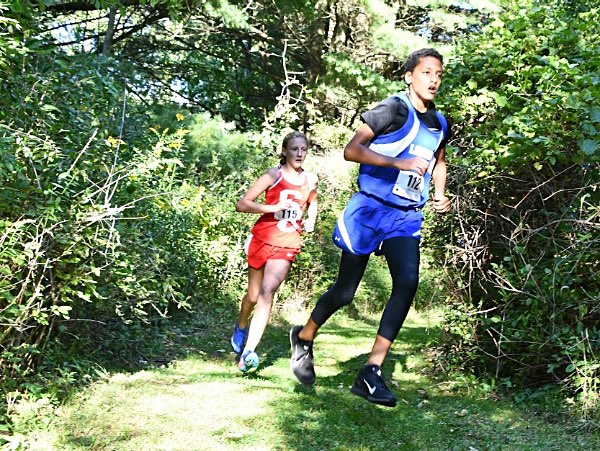 Aiden Hathorn leading the modified race
The boys varsity race was won by Gabe Planty of Watkins Glen – but Lansing's Jack Thomas '20 crossed the finish line less than one second behind him. Planty led his team to an overall win; Trumansburg, Southern Cayuga, Lansing, and Groton finished in 2nd, 3rd, 4th, and 5th in the team standings respectively. Ryan Barton '20, Teddy Brenner '21, Caden Michalec '22, and Joshua Tully '21 were also scorers for Lansing with Daniel Dedrick '22 and Parker Vooris '23 displacing for the team.

The Bobcats will travel to Section 3 for the Baldwinsville Invitational this Saturday and then to Section V for the McQuaid Invitational before returning to IAC competition.

Are You a Sports Reporter?

We'll Make This Simple: We do not have the resources to cover sports, but you can help.  Lansing loves sports.  Our kids work hard and deserve the recognition.  So we do what we can, which is provide a venue for parents, coaches, fans or players to spend a short time writing bout our wonderful Lansing teams in school and in the Town Recreation Department.

Why We Need You: By the numbers we know our readers love to read about Lansing sports.  During the Varsity season the Sports page is as popular as our News and Around Town pages.  But with one staff reporter for all topics in our small publication the only way we can cover sports at all is if volunteer writers send in reports.

We would love to expand our sports coverage to reports on club sports, more Rec Department sports news, and other schools that Lansing students attend, such as Ithaca High School, club teams, or New Roots High School.

Coaches: We get many wonderful articles from coaches who have been really great about taking the time to write up theoir team's accomplishments.  If you are a coach, we love getting sports news from you!

Contributors don't have to be coaches. The Star welcomes contributors of all ages from students to seniors.  The great benefit of having a parent, a student, or any interested person writing about a sport is that you speak the language of the sport and therefore you can connect to readers much better than our one harried reporter could ever do.

Writing a sports article doesn't have to be hard.  While we do work with a style guide,
the basics are simple.  Our writing guidelines can always be easily found at http://news.lansingstar.com/

The many Varsity coaches that have contributed to the Star have been outstanding in this regard.  Individual contributors, often parents of the players, have contributed over the years and have provided amazing in-depth coverage of Lansing athletes.  The Lansing Star is also grateful to Geoff Wright, who has generously advertised on our Sports page since the Star began publishing, just to support sports in Lansing.

Coverage in the Star gives our hard working athletes the recognition they deserve, and your contributions make them and you stars in the community.  For students the opportunity to be published in a local professional newspaper is valuable when you are compiling your resume to get into college, or looking for a job.  For parents its a way to showcase your kids and their teammates.  For any sports fan it's a great expression of your love for our local teams.