Within Reach - The 6th Year Teddy Bears Fly in Syracuse

It begins with the end of the story…

It's a cold December day, quiet, before dawn. Little Olivia stirs and awakens with a start. Not quite understanding the mixed messages she was getting from Mom last night; she knows that there is something special about this day. A few colored lights are up; a small tree is decorated in the corner. Under the tree, a red ribbon wrapped around its neck, a fuzzy new friend beckons for a hug. The little girl and her new stuffed companion find each other, and a long happy friendship begins. A special Christmas day for her for sure, and a second life for the teddy bear, who was once another little girl's special friend.

As all little girls do, the bear's first friend grew up, and her interests moved from fuzzy stuffed animals to soccer, friends, and then boys. Our little bear lived on the bed, then is moved to a shelf, then the toy box, and finally into the attic, forgotten, alone…

One late fall day, the attic door opens and light falls on the shiny eyes of our fuzzy friend. His new life is about to begin - with a joyful flight on to the Syracuse Crunch's home ice.

How it all happens

Making children happy, especially those of families who are having trouble making ends meet, is the goal of the 6'th annual Tired Teddy Bear Toss, sponsored by Stanley Steemer of Syracuse and the Syracuse Crunch Hockey Club. Early in the year, as soon as the date of the event is scheduled – December 10 this year – donations start coming in.

The Crunch staff speak to their friends and neighbors about the forgotten stuffed toys in their attics, the season ticket holders donate at events, and of course, fans bring new or gently used soft toys in on game day for the one day, the ONLY day each year where they are actually INVITED to throw things on the ice!

Hours before the event, the Crunch staff distribute the collected toys on the arena seats. "We can never be sure exactly what will come in with the fans," says Jim Sarosy, COO of the Crunch" and we want to be absolutely sure everyone gets to join in the fun."

Broad smiles decorate the fan's faces as they enter the OnCenter arena. Some carry a single toy, some are empty handed and others have garbage bags filled with the Teddy Bears and Beany Babies of Christmas past, ready to make the season happier for the over 3,000 families they will be distributed to. And the game begins. Everyone is on the edge of their seats as the Crunch plays their hearts out to score that first all-important goal against the Utica Comets, their opponent at this year's Teddy Bear Toss. 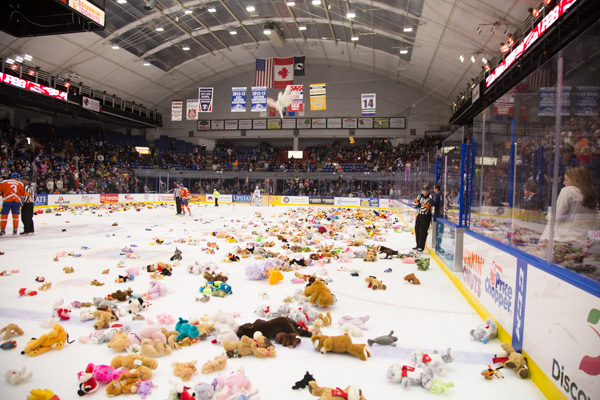 The puck flies in the net, there is a millisecond of hesitation. The fans roar, and the deluge begins. For the next several minutes, the toys rain onto the ice in a heart stopping display of the generosity of the Central New York Community. The players grin, the fans laugh and continue throwing the toys. Those fans who brought garbage bags filled with stuffed animals machine gun them on to the ice with glee.

As soon as the toys begin flying, volunteers from the Salvation Army, the Crunch staff, OnCenter staff and even the players pour on to the ice to corral them and load them into containers, where they will begin the next part of their journey, to the Stanley Steemer building where the job of cleaning, disinfecting, refurbishing and repairing the many thousands of toys takes place. Everyone is still laughing and grinning as the toys finally leave the ice and the game resumes.

Where did this start?

The collaboration of Stanley Steemer and the Crunch began in 2003, when the signature Stanley Steemer Zamboni ice cleaner made its first appearance at a Syracuse Crunch game. These two civic minded organizations and their leaders immediately hit it off, and when the idea of the Teddy Bear Toss came up, the organizations enthusiastically joined forces.

Working together on the Teddy Bear Toss – this is the 6'th year – the Crunch and Stanley Steemer have donated many, MANY thousands of toys to needy families to make their Christmas's brighter. "I really don't know how many toys we collected last year," says Jeff Trisciani of Stanley Steemer "but it is in the thousands. We don't count them – it's a big enough job to clean and refurbish them!"

Trisciani assigns several of his staff to the daunting but enjoyable week-long job. Two of the trucks usually used for on-site carpet cleaning are running outside the front door with hoses run into the large front room where the men work on the toys. One man brings bagfulls into the room where technicians wash, spray and disinfect them and move them to the drying area. Damaged toys are repaired, those very few that are beyond help are discarded, and the rest are donated to the Salvation Army for their Annual Christmas Bureau.

The Teddy Bear Toss is not unique to Syracuse. It is a popular event at minor league and college hockey games before the Christmas season, where the toys get collected and distributed to children who otherwise might have a bleak holiday season.

The Calgary Hitmen hold the record of the most toys ever at a Teddy Bear Toss, of over 28,000 toys collected, which all go to several different charities. In our Syracuse event, all the toys, after loving cleaning and refurbishment, are donated to the Salvation Army's Christmas Bureau.

The Christmas Bureau is the single most visible event that the Salvation Army hosts, receiving donations from local businesses and organizations. The Teddy Bear Toss (a huge event in this writer's opinion) is but a small part of the massive Christmas Bureau, which takes over the entire OnCenter.

Last year, over 3,700 families were provided Christmas Dinner, gifts of books, educational toys, personal care items, and of course, teddy bears. The toys are separated by age appropriateness, bagged and handed to the families – one bag per child in addition to all of the other items that our generous Central New York community donates. 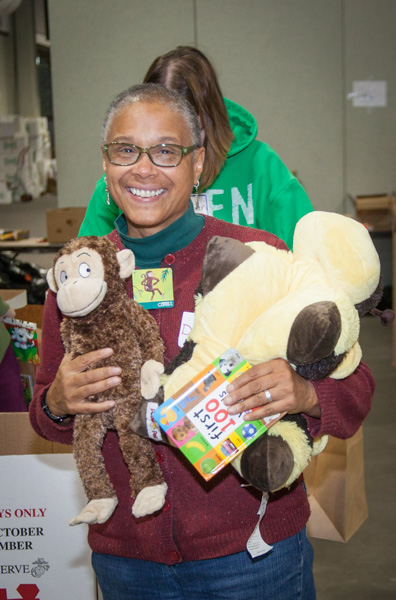 Planning for the Christmas Bureau begins in late Spring, lining up the donors, planning the dates and doing the necessary drives and fundraising necessary for the Salvation Army to do its good work. As the date of the event approaches, hundreds of volunteers raise their hands to help. School groups work several days before the event filling boxes with Christmas Dinner, corporations, Wegman's in particular, provide donations of food and manpower.

On the day of the event, still more volunteers, including Jeff Trisciani of Stanley Steemer and his family, assist each of the families in navigating the Bureau, and seeing to it that they get all the goods they need.

One of the stories Jon Rogers, Communications Director of the Salvation Army tells, is about a man who had lost his job and was having trouble making a good holiday for himself and his children. He was so overwhelmed and grateful for the care and kindness shown him at the Christmas Bureau, that he vowed that, once he got back on his feet, he would become involved with the event that had helped him in his need.

The next year, he was employed, and he encouraged his corporation to become involved as well. They have been ever since.


"This is one of those stories that comes out exactly how you hope it will." Says Rogers. 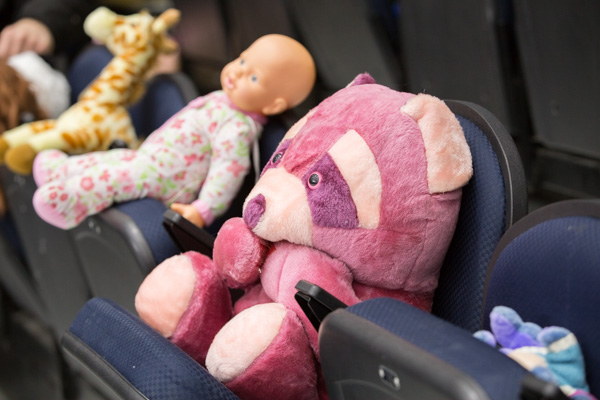 Connecting the many pieces together, from the Teddy Bear Toss, to the Christmas Bureau and all the steps, donations, sponsorships and volunteers involved are based on one undeniable truth:

Whether it's a material gift or time spent serving your fellow man, there is no greater gift you can give yourself than to give OF yourself. Generous Central New York is a place we can be proud of and humbled by – one of the most giving communities imaginable.

Both the Jim Sarosy of the Crunch and Jeff Triciani of Stanley Steemer expressed the same sentiment – "We want to give back to the community that has blessed us."

Get a ticket and come to the Crunch Game on December 10 – better yet, bring your whole family. This kind of happiness won't be available on home ice until the 7'th Annual Tired Teddy Bear Toss in 2017.

See you at the game! It's well within reach, and tickets are available!
'Within Reach' highlights the food, wine and fun of places 'within Reach' of Lansing NY.  Of course, your reach extends exactly as far as you want it to. I am Monroe Payne, Uncle Monte to some. Come with me as I visit, taste and play in our own back yard, the beautiful Finger Lakes of Central New York.