Village of Lansing Trustees approved a deer management program for the tenth year, allotting up to $2,000 to pay for part of the program.  Only approved bow hunters will participate in the program, which will allow them to hunt 24 hours a day during a special season requested by Village officials and approved by the The New York State Department of Environmental Conservation (DEC).  After ten years there are signs that the program has been successful.

"Anecdotally people tell me they have things growing in their yards now that they haven’t seen for years," said former Trustee Lynn Leopold.  "I’ve heard that from quite a few people, so the pressure is off."

A decade ago the Village of Lansing Trustees decided the time had come to do something about the deer problem.  Gardens and new forest growth were decimated. Too little food for too many deer leads to disease and the decline of other animals and plants.  Wooded areas could no longer sustain new growth to replace dying old growth, threatening Village forests.  Since the Village deer management program was implemented ten years ago, the population has been thinned, and villagers are beginning to see benefits from the program.

"You can see that," says Dr. Bernd Blossey, of Cornell University Department of Agriculture and Life Sciences, who coordinates the Village of Lansing program and other deer management programs around Tompkins County.  "There are a number of things - one is people don’t see deer any more, or at least not as easily.  That, in part, explains that deer deer are not as hungry.  There is not as much food shortage so they are becoming more nocturnal, their usual pattern."

The first two years yielded a modest number of deer.  11 were taken in 2007, and only 2 in 2008.  From that point the numbers rose steadily until 65 deer were taken in 2011.  The next year the DEC implemented new regulations defining Deer Management Focus Areas (DMFA) coupled with a later January hunting season.  The deer were learning where the hunters were, so yields during the regular hunting season declined to 47 in 2012 and 2013, and 40 in 2014.The regular hunting season program only yielded 47 deer that year, but with DMFA another 18 were taken, bringing the total up to the desired 65.

Meat not used by the hunters and/or landowners is donated to organizations like the Southern Tier Food Bank.  The Trumansburg deer management program donated over 1,000 pounds two years ago.

Last year the program changed dramatically.  A special hunting season was approved for participants in the official Village program only.  Hunters would be allowed to hunt after dark, using feeders to bait deer and red lights on special bow mounts to see them in the dark.  65 deer were taken.

"Despite no snow, despite difficulties getting participants up in trees, because the deer weren’t there, we still shot 65, while all the other programs were dropping down to 50% of what their rates were," Blossey told the Village trustees last month.  "Trumansburg was at 27, compared to 90 in the first year." 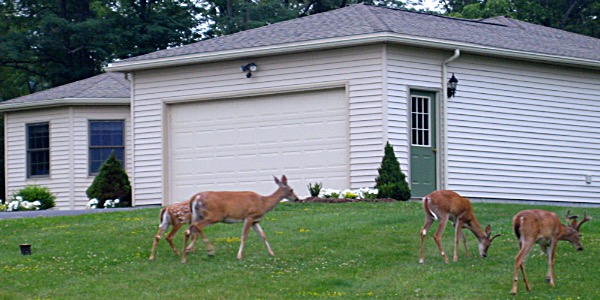 Only a few years ago this was not an uncommon sight. Ten years of the Village Deer Management Program has reduced the herd size so there is not as much competition for food. A more sustainable herd size has meant the deer are returning to more natural patterns, good news for gardeners.

This year Blossey's group consulted with the DEC about how the nuisance permit program can be even more successful.  The areas that were baited in last season's programs were monitored using trail cameras, and it was found that the deer were coming early in the morning, before sunrise during times not authorized for hunting by the DEC.  Based on this data both Cornell University and Trumansburg requested 24 hour hunting, and the DEC granted their requests.  Blossey said a 24 hour permit wouldn't change the number of hours hunters would be in the stands, but would allow them to hunt when they can be most effective.  He recommended Village of Lansing Trustees also request the 24 hour permission.

"It wouldn’t increase the amount of time the stands would be occupied, because there are two hours when the deer are coming by," he said.  "It gives us the ability to time it better."

Blossey's focus is on invasive species and how they impact local flora and fauna.  The damage done by an overpopulation of deer effectively makes them, in a way, an invasive species.  Blossey aims to return them to indigenous species status by thinning the herd to sustainable levels, and reestablishing their natural behavior by keeping their numbers down to the point where there is plenty of food for the remaining deer.  But Hartill and some of the Trustees said that villagers have expressed concerns about the actual effectiveness of the program because there is no hard data.

"What people typically ask about is numbers, which doesn’t matter to me," he told the Trustees.  "You can have a lot of deer that don’t do anything, or you have a few deer that keep the vegetation low.  That (data) is being worked on right now.  You will see graphs on this.  But it’s clear that the individuals at our shooting locations report fewer deer.  They don’t see them any more.  The trails that are like cow paths have largely disappeared and there are flowers coming up.  So we are making a difference even though we can’t quantify it in the typical scientific way that we would like to.  But we will get you the data."

Blossey said that with the ability to hunt when and where the data says deer will appear the number of stands will be reduced, and the ability to monitor the herd increased.  The nuisance program includes special permits that allow them to take antlered deer as well as does, hunt any time of day, use lights, and to bait the deer with corn feeders.

Last year 261 50 lb. bags of corn were provided by the Village at a cost of over $1,200 ($4.62 per bag).  Village Clerk Jodi Dake said the cost has gone up to $6.36 per bag, calculating that the same amount of corn would cost about $1,700, still well within the $2,000 included in the Village budget.  Last year the Village also purchased some feeders, which are supplemented by feeders owned by some of the hunters and landowners.

The Trustees voted last month to approve an expenditure of up to $2,000 for corn, to petition the DEC to extend its deer management program to allow 24 hour hunting, and to approve the rest of the conditions that were allowed last year.  Only approved bow hunters will be allowed to participate.  As in previous years the Trustees declined to approve the use of crossbows.