When the Colgate University Athletics Department decided it needed some help boosting the performance of its teams for the new year, it took the unusual step of hiring a certified shaman from Ithaca to bless six of its sports facilities.

Susan Norton, who trained with shamans in Peru, spent a blustery day carrying a burning piece of sacred wood, incense and essential oils under bleachers and across sports fields on the campus in Hamilton, N.Y. During the seven-hour ceremony, Norton says she uncovered some 'oppressive energy,' which she guided into a crystal and then released in a fire ceremony back in Ithaca.

If you don't believe in spirits or the possibility that humans can interact with them, talk to Jeffrey Falardeau, associate director of athletics at Colgate, or one of the many people who have had their homes, apartments, medical offices and businesses blessed by Norton.

"After she came, we had a really great track of success with some of our sports teams," says Falardeau, who found Norton in an online search. "It kind of makes you wonder."

Norton, a 55-year-old former Spanish teacher, became a certified shaman in 2010, after she journeyed twice to the mountains of Peru to study the ancient rites of shamanism, the practice of interacting with the spirit world and channeling that energy to the human world. 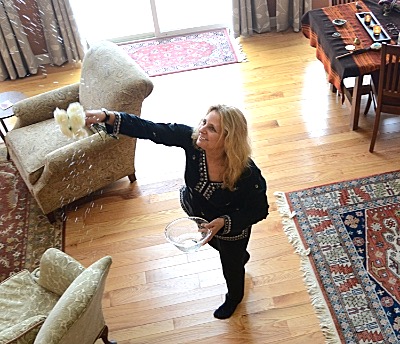 "What I do is shift the energy in sacred space," Norton says. "It's not me who does the shift. I call in the spirit and it comes in through me. It comes into the space and something always happens."

Miles McGrath, an executive of a copy equipment company, hired Norton after he had a vision of a stranger crying in his apartment in Ithaca. Last October, as Norton spread red and white carnation petals doused in liquid throughout the apartment, she saw the image of a woman and "invited her to go to a better place."

"I think there are things going on that we're not aware of," McGrath says. "She has a way of connecting to that unseen realm."

In a new project, Norton is organizing a 12-day group tour of sacred sites in western Ireland this June. Norton plans to take up to six people on the trip, which will be co-led by a tour guide specializing in spiritual journeys in Ireland.

"It's the Ireland trip of a lifetime," she  says. "The experiences and friendships we create will stay with us forever."